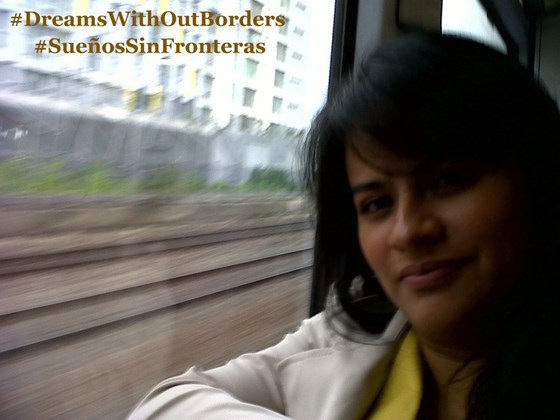 On August 5, I launched a fundraising effort which I named Dreams Without Borders. It is about a dream that had been buried along with many other aspirations for some time.

After graduating from college when residing in the U.S., I knew I wanted to earn a graduate degree. I had not figured out exactly what I would pursue but I was sure it had to be aligned with my life purpose; a work in progress that was halted the day I returned to Mexico.

Some of us experience life-altering moments, those in which we see our dreams fall into pieces right in front of us. In my case, a border became the physical and emotional barrier to a future I had once envisioned.

Some of my friends encouraged me to look for options to continue my education in Mexico. Given that it was my country of nationality, it was assumed I would be able to pursue opportunities I was not easily afforded as an undocumented immigrant in the United States.

I forced myself to be hopeful in the midst of the turmoil that became restarting a life from ground zero. I outreached to all the major universities in Tijuana to inquire about graduate school. After my fourth conversation with a university representative, I realized that having finished college outside of Mexico posed a problem.

My U.S. degree would not be fully recognized by the federal education entity, Secretaría de Educación Pública. This meant that all the years invested in an education abroad did not amount to a valid degree here. I would need to take a significant number of courses to obtain a bachelor degree (Licenciatura) in Mexico. Graduate school was a goal that seemed light-years away.

Three years later, on a casual Saturday afternoon I was in the middle of my least favorite errand, grocery shopping. For no particular reason, I walked over to the store’s magazine stand. Skimming through the business section, I noticed a magazine cover with a catchy image: a young attractive man holding a crystal ball in front of him, reflecting images of success.

He was clearly conveying he owned the world and his future. The upper right heading read “Education Special: Study Abroad”. It got me to thinking. Could pursuing a degree abroad be THE option for me? That night I could not sleep pondering on this question. As I do when I can’t calm down the chatter in my mind, I sat in front on my laptop ready to search for answers.

I knew I had to be clear on my academic intentions. I wanted a program that would take me out of the corporate job where I was reaching a dead-end. There had to be a way back to a career of service, ideally with an international entity like the United Nations.

After much consideration, I had discarded all the graduate programs I had once considered to be a match: Public Administration, Business and Economics. Although each has its own merits and would certainly prepare me for a path in international work, there was something missing in their curricula.

I was not quite sure what. Then, I accidentally stumbled upon one of those moments of clarity. It began with a question that revealed a stupidly obvious answer: “Why don’t I study migration?” Yes, of course. My life IS migration. I had experienced it in many ways: emigration, immigration, detention, deportation, forced displacement…the list can go on.

This epiphany propelled me to search for programs in the study of migration. I found that those in the United Kingdom were the best fit. Even if there had not been bureaucratic obstacles to study in Mexico, I could not find a postgraduate program in migration anywhere.

I found it to be ironic considering that Mexico, according to the World Bank 2010 figures, is the largest emigrating country in the world. In contrast, the UK not only offered a world-class curriculum but also would accept my education in the U.S. without the revalidation process.

Although I finally had a reason to feel inspired, I soon realized this journey would not be an easy one.

Having started the application process in December left me with limited funding options in the 2013-14 academic year. Most major scholarship program deadlines had passed. Additionally, applying to very competitive programs (including Oxford and University College London) was a long shot and I was unsure I would be offered placement.

I had also decided that waiting for the next academic cycle would mean wasting more time. I had already lost over three years recovering from a deportation. Life was passing by and I was at a crossroads; it was now or never! There is no way of knowing what other life circumstances would get in the way. It had happened to me one too many times before.

Consequently, when I received my acceptance letter this past March from University College London, there was no turning back. I quit my job so I could focus on finding ways to finance my degree. It was a huge risk to take, but I had to be 100% committed.

It turns out the risk has been well worth it. I have now funded more than 80 percent of my tuition and living expenses and I have decided to involve an entire community that believes in my life story to help me reach this dream, one that is beginning to transcend borders.

A few days after I launched the online tuition fundraising efforts, a friend who I had lost touch shortly after settling in Mexico, had heard of the campaign and sent me the following note which I quote with her permission:

I am so excited that you will be in London earning your Masters… I know that I haven’t communicated with you very much… but know that I carry you with me every day. I carry you in my prayers. I carry you in the service to AB540 students. I see you in every [#DREAMer] that I assist. You doing well gives me hope that they will do well. Thank you for being successful.

I was very moved by this message which only confirmed what I know to be true in my inner core… this is bigger than my own dream.

Almost four years after being deported to Tijuana, Mexico, Nancy Landa is looking to begin her graduate studies in Global Migration in London this fall at the University College London (UCL). See more details and lend your support here.