Latina Lista: News from the Latinx perspective > Columns & Features > Global Views > Caravan for Peace demands an end to the wave of Mexican violence 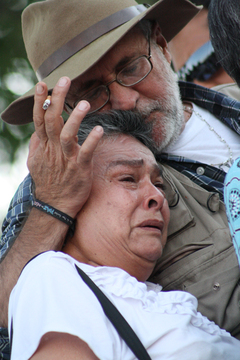 The Caravan for Peace with Justice and Dignity, led by poet and activist Javier Sicilia settled in at the plaza as the poet told a crowd of several hundred about his son’s killing and stressed once again that the drug-war murders in Mexico are non-discriminatory. If something isn’t done to stop the killings, anyone could be a victim, he said.

“It’s a war that no longer distinguishes. Any Mexican can be assassinated, can be a victim of crime or repression,” Sicilia said. His son, Juan Francisco Sicilia Ortega, was found dead in Cuernavaca, Mexico in March, apparently a victim of Mexico’s drug war.

The Caravan for Peace with Justice and Dignity also maintains that Mexican soldiers are guilty of many human rights abuses against Mexican citizens and are complicit in the violence, rather than helping to stop it.
Javier Sicilia comforts Luz María Dávila at the really in Juarez on June 10. Dávila had two sons killed in Villas de Salvacar. (Luis P. Hernández/Borderzine.com)

Sicilia and other activists began their caravan on June 4, traveling through eight Mexican states. The caravan reached Juarez on June 10, where thousands gathered in a similar rally at Benito Juarez Plaza.

“It’s important that Americans recognize that the violations by the Mexican army (against Mexican citizens) are a consequence of the Merida Plan and the U.S.’s strategy,” said Sicilia, speaking at a press conference at Casa Vides in downtown El Paso before the rally.

Sicilia and other activists called on the Mexican and U.S. governments to end the militarization of Mexican cities and work with its citizens to put an end to the violence caused by warring drug cartels.

Members of community organizations and others in attendance were invited to sign the caravan’s Proposal for a National Pact, which presents six demands to the Mexican government. The group is also calling for an end to the Merida Initiative…