LatinaLista — Everyone thought it was a done deal. Both houses of the California legislature have passed the Fair Treatment for Farm Workers Act. 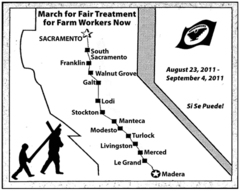 The Fair Treatment for Farm Workers Act.” Introduced by Senator Darrell Steinberg (D-Sacramento), SB 104 would give the state’s more than 400,000 farm workers an alternative to on-the-job polling place elections to decide whether to join a union. The new option would allow them to fill out state-issued representation ballots in their homes, away from bosses’ threats and other interference. If a simple majority – more than 50 percent — of workers sign the ballots, their jobs would be unionized.

In an industry that relies on the backbreaking labor comprised of both an undocumented immigrant population and low-income citizens where some employers have historically been found at fault for not providing basic necessities for their workers — like rest time, shade, water, etc. — it makes sense to allow workers to decide for themselves, away from intimidating employers’ threats whether or not they want to join a union.

Yet Governor Brown has gone on record as saying he’s “not yet convinced” California needs the bill.

Two months ago, Gov Brown vetoed the Fair Treatment for Farm Workers Act, a bill that would have made it easier for farm workers to join a union and speak up for their rights. More than 1,000 farm workers visited the Capitol during the 12 days Governor Brown deliberated on the bill. Risking their jobs to attend, they held vigils, fasted and rallied for change. They told the Governor how the laws in the books are not the laws in the fields. They talked about having no bathroom breaks, no overtime pay, no respect and the lack of enforcement of heat regulations. And they were right — two more workers may have died of heat related illness this year alone.

Maybe Gov. Brown doesn’t see farmworkers as his constituents. After all, they’re not the ones with the deep pockets who can pay $500 or more for a plate to fund his political aspirations.

There’s no doubt that SB104 will impact agricultural employers. As one wine law blogger wrote:

…From that point on penalties for missing deadlines or committing unfair labor practices are steep: ranging from $5,000-$20,000 per occurrence. The bill is currently awaiting Governor Brown’s signature. Once it passes, its effects may be felt quickly, so take this opportunity to make sure your house is in order.

If this bill became law, then farmworkers would no longer be at the mercy of those employers who have made a profit off their cheap labor. Finally, farm workers could be treated like any other worker in America — but it will take the signature of the Governor.

In one last big show of solidarity that they want this bill passed, farmworkers started on a 200-mile,13-day march through the Central Valley to California’s State Capitol, Sacramento. The march will end on Sept. 4, Labor Day Weekend on the steps of Gov. Brown’s office.

The United Farm Workers are asking people from across the nation to help support the farm workers in convincing Gov. Brown to sign the bill by signing an online petition.

Enough with “not yet.” The time is now.