Intrn’l Video: Swiss-Bolivian artist takes a ‘brush’ to social ills that divide society the world over 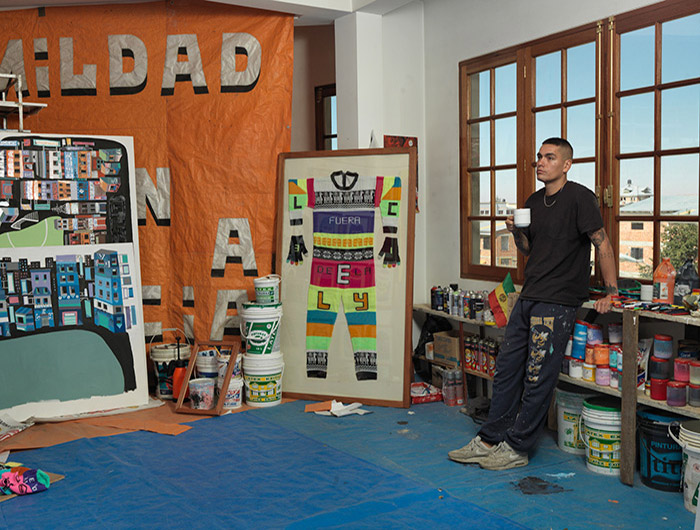 LatinaLista — Swiss/Bolivian Luciano Calderon is quickly making a name for himself in the art world. ‘Drawing’ on his bicultural heritage and his status as a Millennial in a world where social injustice runs rampant, capitalism rules, poverty persists and inequality is growing, this 20-something artist learned early that to make an impression highlighting the world’s hypocrisy his work must be seen and noticed!

It is that route that Calderon chose for a solo exhibition that took place in La Paz, Bolivia from May-June 2013. Titled El Choco (a derogatory term for light-skinned indios), the name of the exhibit also was the name of Calderon’s Bolivian version of Superman. Wearing a hand-knitted body suit and preferring to be identified as “Anonymous,” El Choco patrols the streets of El Alto, Bolivia — a town where 70 percent of the population lives below the poverty line and most residents have neither water nor electricity.

Though Calderon’s full exhibit attempted to connect the two cities of El Alto and its richer sister city of La Paz with colorful and politically inspired installations in a variety of mediums, it’s the poor of El Alto that is seen in the featured video, and which was also part of the artist’s exhibit.

Via the video, the landscape of El Alto provides the canvass for a display of the daily lives of a population that is 55 percent indigenous and “who have been discriminated against for hundreds of years by the mestizos, the minority.”

The exhibit is Calderon’s platform to blur the lines between strict distinctions of racial and social affiliation.