Latina Lista: News from the Latinx perspective > Causes > Social Justice > Jailed at 15 for a murder he knows he didn’t commit. Serving a life sentence now for over 30 years. Many ask: Isn’t it time Efrén Paredes was released from jail?

Jailed at 15 for a murder he knows he didn’t commit. Serving a life sentence now for over 30 years. Many ask: Isn’t it time Efrén Paredes was released from jail? 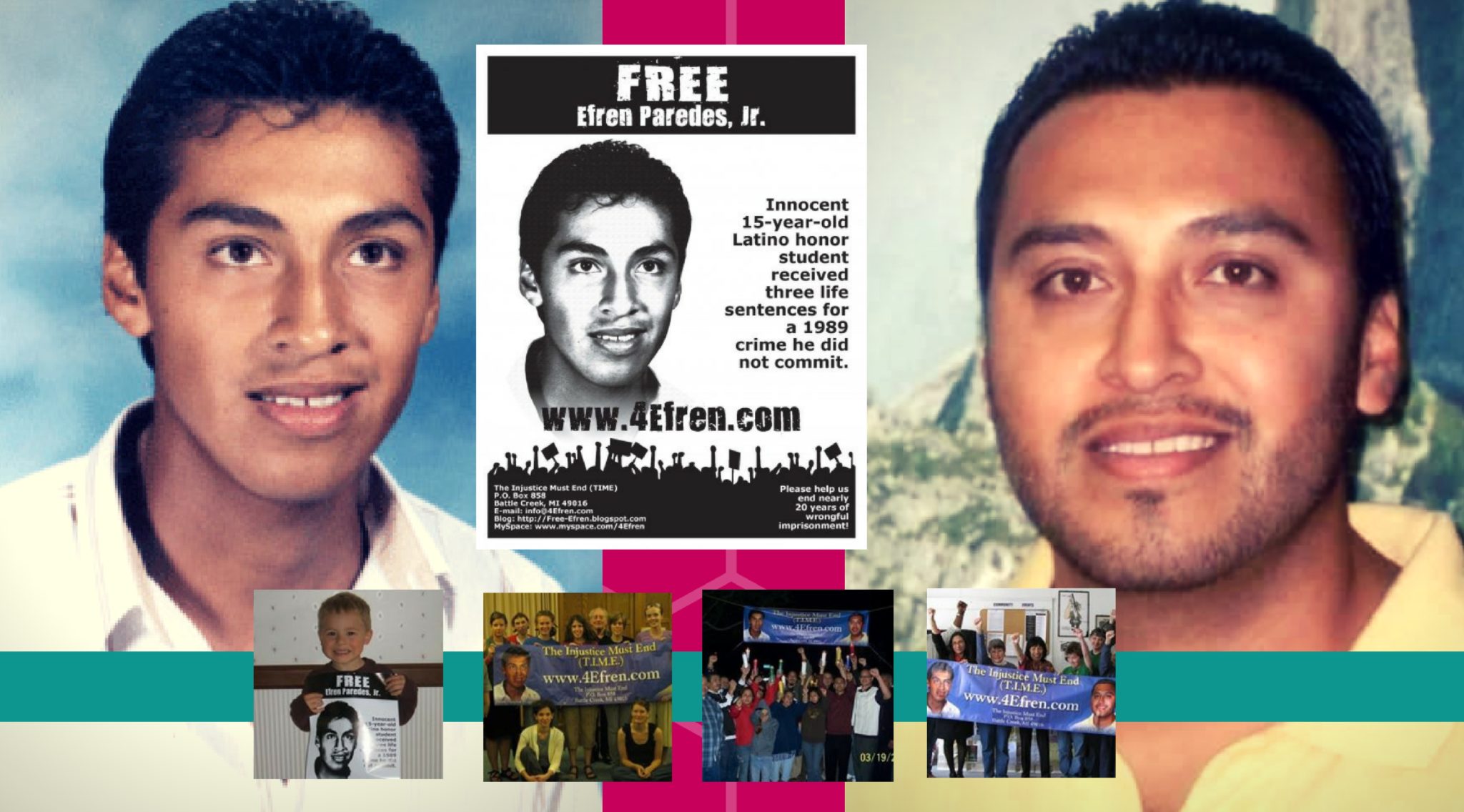 Editor’s note: It wasn’t long after I created Latina Lista in 2004 that I was contacted by Efrén Paredes. Efrén had been tried and jailed at the age of 15 for a murder he claims he didn’t commit. Over the years, enough activists, officials with the innocence project and others have looked into his case and decided it was worthy of being revisited. All ended up advocating for his early release — to no avail. The following is the latest email I’ve received from his mother.

In this day and age of Kim Kardashian securing the release of incarcerated women, it’s time a Latinx stepped up to do the same for those in the Latinx prison population who may be behind bars unjustly. Certainly, a lot more noise needs to be made for those like Efrén who have basically grown up behind bars thanks to a judicial system that we now know isn’t as colorblind as we all once believed.

I am reaching out to social justice advocates who support an end to mass incarceration, the disproportionate criminalization of youth of color, and wrongful convictions, and inviting you to please join the chorus of voices supporting the campaign to get justice for my son, Efrén Paredes, Jr.

Efrén is a Latino man from St. Joseph, Michigan, arrested at age 15 who was sentenced to life without parole (LWOP) for a 1989 crime he did not commit. The conviction was based solely on circumstantial evidence. Since the day of his arrest people have verified he was home with our family when the crime was committed.

Efrén has been incarcerated now over 30 years and has spent two-thirds of his entire life behind bars. His case is the subject of the new documentary film installation, “Half Truths and Full Lies” produced by award-winning filmmakers Tirtza Even, Meg McLagan, and multimedia producer Elyse Blennerhassett. Information about the film and its producers is available at http://HTFL.info.

In 2012 the U.S. Supreme Court ruled that mandatory LWOP sentences for juvenile offenders are unconstitutional and ordered the resentencing of all 2,500 people impacted by their ruling. After nearly seven years of repeated delays by the State of Michigan, Efrén is finally beginning the process of being resentenced in the coming months.

We are inviting people to take a few moments to sign our Change.org petition which sends a prepared email message to Efrén’s sentencing judge detailing reasons he is deserving of release. The message asks that Efrén receive a sentence with an earliest release date proportional to others similarly situated who have already been resentenced. The petition can be accessed at http://Bitly.com/FreeEfren.

We are attempting to generate as much support to convince the judge that Efrén is not deserving of a LWOP sentence again. The success of our campaign could determine whether Efrén receives the opportunity to finally come home to his family in the coming months or potentially spend decades longer languishing behind bars.

Our family could really use your support right now. Please lend your voice to this important digital advocacy campaign and circulate our petition link via email, social media platforms, text message, and post it on blogs and websites. Your assistance would be most appreciated.