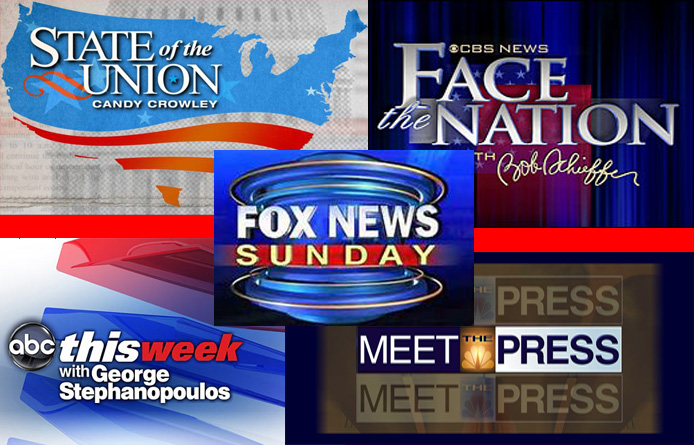 LatinaLista — Anyone who regularly watches the Sunday morning political talk shows knows that the hosts and vast majority of guests are white and male. For anyone who tries to refute that obvious diversity imbalance, there’s a quarterly study that underscores just how bad it is.

Media Matters, a media watchdog organization, has released their latest study, The Demographics Of The Sunday Morning Political Talk Shows.

The study underscores the obvious:

Yet, what is surprising given the illusion of balance of opinion that each show, with the exception of one network, would like to portray themselves exhibiting, is that the majority of white male guests on these shows are conservative.

When it comes to the actual ethnic and gender breakdown of guests, the story hasn’t changed much either:

The take-aways from this ongoing study are several:

1. Major networks and cable Sunday morning political talk shows are doing a LOUSY job of booking not only a diverse roster of guests but diversifying their own ranks of roundtable opinionators.

2. The fact that so many of these shows, with the exception of Melissa Harris-Perry, leads to the assumption that the ranks of their producers – who book the guests – must also lack diversity or basic journalistic skills to know where to find qualified people of color to appear on their shows.

3. The only way to achieve more inclusion on these shows, and in essence, include the voices of people of color in the national dialogue of issues and policies, is to have more hosts of color who will bring in diverse guests — and host a show that will actually resemble what this country looks like in the 21st Century.