LatinaLista — There was a time among most Latinas that the term “feminism” evoked very mixed emotions. It was hard for those Latinas to take to the streets and burn their bras in protest for the dismissive treatment of women by society and then come home and, as tradition dictated, serve the men in the family.

Over time, the word evolved as did Latinas’ attitudes toward it. Nowadays, there’s no Latina who doesn’t want respect, equal pay, equal opportunity, equal benefits and equal recognition. The notion that women should be submissive to their husbands, because the men demand it, is a bygone practice in the majority of Latino households. 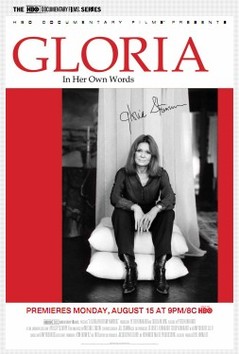 Today, Latinas serve their husbands, fathers, sons, etc. because they want to — not because they’re expected to. And when they can’t, most Latinos step up to the plate (pun intended) and help out.

It’s a big difference from the way it used to be and there’s one woman to thank for pushing the definition of what it meant to be a woman and what it didn’t mean. Her name is Gloria Steinem and she is seen as the godmother of the feminist movement.

Tonight, at 9 p.m., HBO Documentaries airs the film “Gloria: In Her Own Words.” The film looks at Gloria Steinem’s life and career as a feminist and co-founder of ‘Ms. Magazine.’

Yet, Steinem also founded another organization called Women’s Media Center (WMC). In 2005, along with Jane Fonda, Steinem founded WMC with a specific objective:

It’s not often that an organization can celebrate watching a film made about one of its founders. As a tribute to Steinem, the WMC is organizing a series of activities to jumpstart an intergenerational discussion about the future of feminism.

From hosting house parties to watch the documentary; posting on the WMC Facebook wall what you want the future of feminism to look like; participating in the tweet-up (Use #gloria and #wmc) during tonight’s premiere to participating in a live chat with Gloria Steinem the day after the documentary premiere on HBO Connect, the WMC wants to give women a platform in voicing their thoughts about the current state of women, as well as, learn more about Gloria Steinem.

An extra way the WMC is broadening the voices of women on the topic is by sponsoring a video contest.

Submit a 2-minute video telling us what you want the future of feminism to look like and what you’re going to do to make it happen. The winner of the contest will have a private 10-minute phone conversation with Gloria Steinem and the winning video will be featured on the Women’s Media Center Website.

In an interview with HBO about her documentary, Steinem was asked:

HBO: You’ve said, “I wasn’t crazy, the system was crazy.” Is the system still crazy?

Gloria Steinem: In a general way, the system is still crazy. But thanks to social justice movements, and years of hard work, there has been positive change.

The system is less crazy because there are more accurate laws, and terminology; you no longer have to have somebody standing there watching you get raped, and willing to testify, in order to be credible. There are laws about sexual harassment which didn’t even exist as a word; it was just called “life.”

There certainly has been progress. But we still are in an overall structure that punishes invasion of private property more than the invasion of people’s bodies. We still think you can reach a peaceful end by a violent means, which is rarely the case. People’s fate is stil way too much determined by group of birth, and too little by unqiueness and individual talent.

Previous Post Latest immigration enforcement measures have many Latinos wondering if Pres. Obama is crying wolf on being an ally
Next PostWar of words between Lawrence, MA's Dominicans and Puerto Ricans

Latest immigration enforcement measures have many Latinos wondering if Pres. Obama is crying wolf on being an ally
Comment
War of words between Lawrence, MA's Dominicans and Puerto Ricans