LatinaLista — To say Latinos have a love affair with food would be an understatement. Food is enjoyed whether it’s in the family kitchen or out eating in restaurants. In fact, according to an article in FoodBusinessNews.net, the restaurant industry heavily depends on Latinos. 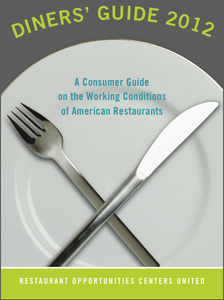 According to Packaged Facts, without the influence of Hispanic spending and population patterns, restaurant industry sales would have declined from 2008 to 2010. Additionally, youth in this segment provide an important opportunity for restaurant growth.

…Specifically, Hispanics ages 18-24 are about 25% more likely than Hispanics in general to use both limited-service and snack and beverage restaurants at least 14 times a month. Non-Hispanics using of the same market also skew toward the younger crowd, but the prevalence of younger Hispanic consumers makes this population even more important to the restaurant industry.

Ironic that the restaurant industry is pinning such high hopes on Latino consumers considering that it’s Latinos who now serve as the main group of workers in its labor force.

According to the Bureau of Labor Statistics 2010 data on industry labor, more Latinos work in food services and drinking places than any other ethnic group.

Among blacks, Asians and Latinos, Latinos comprise a combined percentage of 37 percent of the food services/drinking workforce. Blacks are 18 percent of the workforce in those industries with Asians trailing at 9 percent.

One would think the high number of Latinos working in the food services industry shows that these employers, for the most part, value their labor. Yet, not all restaurants treat their employees the same.

Those restaurants who shortchange their employees from low wages/tips to unpaid sick days to discriminatory promotions should be considered ‘unfriendly’ places to work. According to one organization, restaurants who are guilty of the unfair treatment of their staff should not be rewarded with anyone’s business until they change their ways.

But with the thousands of restaurants in any city and the millions across the country, how is anyone to know which restaurants are treating their employees ‘raw?”

The Restaurant Opportunities Center United or ROC United has that taken care of. They’ve come out with their first guide to friendly restaurants.

Provision of paid sick days, wages of at least $9 per hour for non-tipped workers and $5 per hour of tipped workers, and opportunities for internal advancement.

Knowing how much eating out costs coupled with the rising costs of living, it makes sense that hard-working restaurants workers, whether they’re bussing tables or taking orders, get what most people in other industries should be getting — equal opportunity and a fair paycheck.

Previous Post President Obama: The Beginning of the End of AIDS
Next PostSan Antonio looking for its own poet laureate

President Obama: The Beginning of the End of AIDS
Comment
San Antonio looking for its own poet laureate