Latina Lista: News from the Latinx perspective > Causes > Social Justice > Part I: In the age of Trump, Latinos’ history of resistance is remembered, celebrated and ongoing

Part I: In the age of Trump, Latinos’ history of resistance is remembered, celebrated and ongoing 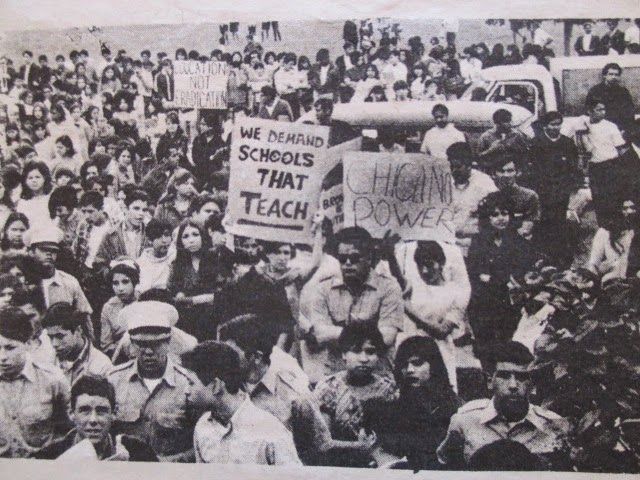 LatinaLista — Throughout my 20+ year journalism career, I’ve had the privilege of meeting many Latino and Latina trailblazers who fought, and are still fighting, for justice and social equality defending the rights of Latino communities.

They were Latino parents who marched on behalf of their children’s quality of education or their own high schoolers who staged classroom walkouts to have their voices heard.

They were Latino migrant farm workers who walked off the sweltering fields until they received basic considerations and benefits. They were undocumented students, known as DREAMers, who staged sit-ins at congressional offices to get their status recognized. They were Latino veterans and academics who protested the exclusion of Latinos in a PBS WWII documentary.

They were Latino authors and activists who defied state bans of Latino literature by bringing them directly into those specific communities to be read and shared; and they were the group of Latino Texans who voiced and marched their opposition to the adoption of a textbook that painted the state history of Mexican Americans in an untruthful and racist light.

In each of these examples, and countless others that exist, Latinos have resisted exclusion and being victims of injustice, inequality and purposed racism. Some could joke that ‘resistance’ is in our DNA.

But what is currently happening in the United States is not a laughing matter. Trump, with a flourish of his pen, has signed into law various executive orders that run contrary to the founding pillars of the nation.

One of the latest examples of Latino resistance is the launch of NOW Strategies. A PR and communications firm founded by former Democratic National Committee and congressional staffers whose main purpose is to “resist (the) Trump Administration.”

However, though Latinos have a history of resistance, it is a tactic that is spawning the birth of ‘resistance’ groups throughout the country, with a twist. These new resistance groups are getting their messages across via this administration’s favorite social media platform — Twitter.

The following is a list of ‘resistant’ groups that have appeared since Trump took office.

Rogue POTUS Staff: The unofficial resistance team inside the White House. We will not reveal our identity to anyone! The only way to keep a secret is to keep it secret! Washington, DC

Rogue NASA: The unofficial “Resistance” team of NASA. Not an official NASA account. Not managed by gov’t employees. Come for the facts, stay for the snark.

AltUSDA: Resisting the censorship of facts and science. Truth wins in the end.

Rogue NOAA: Research on our climate, oceans, and marine resources should be subject to peer [not political] review. *Not an official NOAA account*

AltUSForestService: The unofficial, and unsanctioned, #Resistance team for the U.S. Forest Service. Not an official Forest Service account, not publicly funded, citizen run.

PHOTO: In March of 1968, thousands of East Los Angeles high school students walked out of classes to protest the poor quality of their schools. Latino/a Mobility in California History, USC.

Read tomorrow’s Part II: How to ‘resist’ constructively, peacefully and Be Heard.