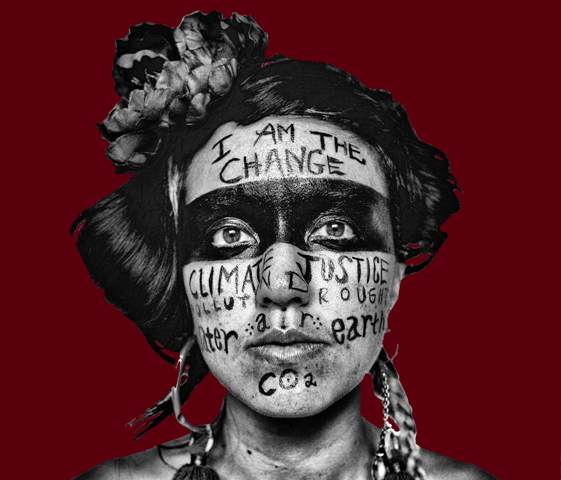 LatinaLista — Among the rational, climate change is no longer denied or ridiculed. Rising sea levels, soaring summer temperatures, monstrous storms, tornados and flooding and a drought encompassing most of the planet are clear indicators that something is happening.

It is said that the people who are on the frontlines of this global climate change are the indigenous. Climate change is already impacting their diet and lifestyle: In Nicaragua, people have now been advised to eat iguanas since the national supply of beans and maize are rising rapidly in cost due to the destruction of crops because of the drought; In the Andes, indigenous farmers are facing a similar scenario and are in crisis mode to preserve their ancestral farming lands and crops; and island nations and coastal villages around the world are looking to abandon their ancestral homelands to escape the rising sea levels.

Yet, too many times in the past when the indigenous have tried to get the world’s attention of the abuse levied against their lands and way of life, the world has paid scant attention.

They don’t plan on being ignored this time.

On Saturday September 21, in New York City’s Central Park West, what is being billed as the “largest climate march in history” is taking place, lead by the world’s indigenous. The march precedes the UN Summit on the Climate Crisis scheduled for September 23.

Dubbed the People’s Climate March, organizers expect marchers to come from all over to demand action from world leaders on how to face the challenges being presented by climate change. The march’s organizers don’t just want to march through the streets of New York City but they also want to do something to differentiate it from past marches. They want to tell the story of the current climate change movement.

To achieve that, marchers will be assembled into one of six specific themes along the march line. Each theme section of the march is looking for specific participants that can carry the particular message of that theme.

The march’s message will be further enhanced by a new film recently released titled DISRUPTION.

The 52-minute film, available online, not only examines the consequences of global inaction on the issue of climate change but provides a behind-the-scenes look at organizing the People’s Climate March.

This is the story of our unique moment in history. We are living through an age of tipping points and rapid social and planetary change. We’re the first generation to feel the impacts of climate disruption, and the last generation that can do something about it ~ DISRUPTION filmmakers

Participation in the march includes both marching in New York City or participating in a global action event.

climate change, indigenous, protest march
Previous Post Migrant farmworker children share their dreams and perspectives in winning artwork and essays
Next PostHow one intern-of-color got a whole new view of The View