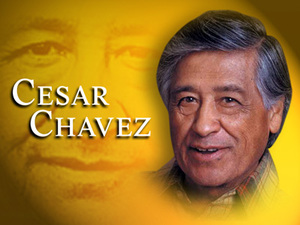 BY THE PRESIDENT OF THE UNITED STATES OF AMERICA

One of our Nation’s great civil rights leaders, Cesar Estrada Chavez came of age as a migrant farm worker, witnessing the injustice that pervaded fields and vineyards across California. Facing discrimination, poverty, and dangerous working conditions, laborers toiled for little pay and without access to even the most basic necessities. Yet amidst hardship and abuse, Cesar Chavez saw the promise of change — the unlimited potential of a community organized around a common purpose. Today, we celebrate his courage, reflect on his lifetime of advocacy, and recognize the power in each of us to lift up lives and pursue social justice.

Inspired by Mahatma Gandhi, Dr. Martin Luther King, Jr., and other visionary leaders, Cesar Chavez based his campaign on principles of nonviolence, which he called “the quality of the heart.” Through boycotts, fasts, strikes, and marches that demanded both endurance and imagination, he drew thousands together in support of “La Causa” — a mission to ensure respect, dignity, and fair treatment for farm workers. Alongside Dolores Huerta, he founded the United Farm Workers of America (UFW), an organization tasked with defending and empowering the men and women who feed the world.

As a tribute to Cesar Chavez’s life and work, my Administration designated the Forty Acres site in Delano, California, as a National Historical Landmark last year, forever commemorating the birthplace of the UFW. In May 2011, the United States Navy named the USNS Cesar Chavez in recognition of his service during World War II. And this month, we honor ten Americans as Champions of Change for their commitment to realizing Cesar Chavez’s dream of a more just tomorrow. Decades after his struggle began, Cesar Chavez’s legacy lives on in all who draw inspiration from the values of service, determination, and community that ignited his movement.

On the 85th anniversary of Cesar Chavez’s birth, we are reminded of what we can accomplish when we recognize our common humanity. He told us, “We cannot seek achievement for ourselves and forget about progress and prosperity for our community. Our ambitions must be broad enough to include the aspirations and needs of others, for their sakes and for our own.” As we honor his broad ambitions and expansive vision, let us pledge to stand forever on the side of equal opportunity and justice for all.

NOW, THEREFORE, I, BARACK OBAMA, President of the United States of America, by virtue of the authority vested in me by the Constitution and the laws of the United States, do hereby proclaim March 31, 2012, as Cesar Chavez Day. I call upon all Americans to observe this day with appropriate service, community, and education programs to honor Cesar Chavez’s enduring legacy.

IN WITNESS WHEREOF, I have hereunto set my hand this

twenty-third day of March, in the year of our Lord two thousand twelve, and of the Independence of the United States of America the two hundred and thirty-sixth.