The High Cost of Ending Deferred Action for Childhood Arrivals 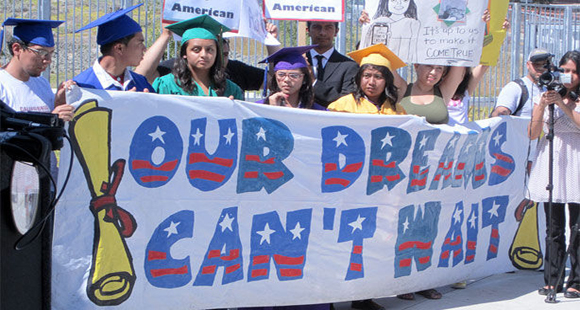 To date, Deferred Action for Childhood Arrivals, or DACA, has allowed more than 741,000 young people a reprieve from deportation and a renewable work permit. Studies haveshown that having DACA brings big benefits for individuals, families, and communities. For example, DACA recipients—often referred to as DACAmented individuals—have been able to use their skills and training to get better jobs, and they are obtaining more education. All of these things translate into higher wages and better economic outcomes. Recipients are also buying cars and houses in large numbers and starting new businesses, bringing significant tax revenue to cities and states across the country.

That being said, during his campaign for the presidency, President-elect Donald Trump promised to end DACA. We do not yet know if he will, in fact, shut down the initiative, but in the meantime, groups such as United We Dream have provided guidance on what DACA recipients should think about before Inauguration Day in January.

But what would happen if President-elect Trump were to end DACA and recipients lost their work permits and had to leave the workforce? Using estimates extrapolated from a cutting-edge Center for American Progress study—“The Economic Impacts of Removing Unauthorized Immigrant Workers”—we have calculated that ending DACA would wipe away at least $433.4 billion from the U.S. gross domestic product, or GDP, cumulatively over a decade.

At a time when the U.S. economy is finally emerging from the Great Recession, a loss of this magnitude is something the nation cannot afford.

According to U.S. Citizenship and Immigration Services, 741,546 people have received DACA to date. An October 2016 survey of DACA recipients—conducted by political scientist Tom K. Wong, United We Dream, the National Immigration Law Center, and CAP—found that 87 percent of recipients are currently working. Combining these two figures—87 percent of 741,546—means that ending DACA would remove 645,145 workers from the economy.

Moreover, if President-elect Trump were to pursue a policy of mass deportation of the nation’s estimated 11 million unauthorized immigrants, as he has promised, it would cost the U.S. GDP slightly more than $4.7 trillion cumulatively over a decade, according to the CAP study. Of those 11 million, the study estimates that 7 million are workers.

The DACAmented portion of that workforce represents 9 percent of the full unauthorized workforce—645,145 divided by 7 million—and by taking 9 percent of $4.7 trillion, we arrive at $433.4 billion in lost GDP over a decade.

Note: This analysis assumes that the geographic and skills distribution of the DACAmented workforce looks approximately the same as the full unauthorized workforce.

Philip E. Wolgin is the Managing Director for the Immigration Policy team at the Center for American Progress. He thanks Silva Mathema for her help checking the calculations.

Collaborative Content: Why Healthcare is a Good Industry to Enter Right Now
Comment
Teacher outreach to parents aligns with stereotypes