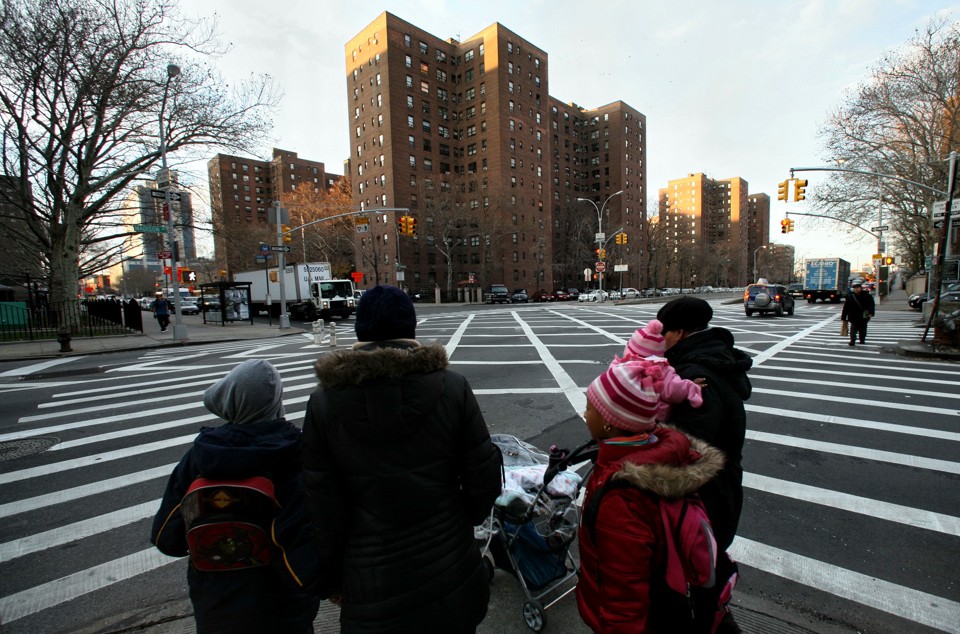 Few human decisions are more important to household and community stability than a family’s choice of where to live. For those with the requisite resources, staking out a preferred neighborhood; selecting an appealing house or apartment; and, perhaps most challengingly, paying off a mortgage or monthly rent may be a source of pride. At its core, homeownership is a building block of civic life.

But that has not always been the case for every American, especially African Americans and Latinos, who have faced a history of housing segregation. To be sure, owning a home is all but an impossible dream for an increasing number of poor families. More likely, finding safe and affordable housing is an existential aspiration—a costly struggle of making daily ends meet rather than a joyous reflection of belonging to a community.

This issue brief examines the nexus of racial discrimination and housing disparity in the United States. It also offers a two-pronged set of policy recommendations that would increase the availability of affordable housing.

The recommendations serve dual purposes. First, they would allow increased mobility for low-income families to secure housing options in more affluent communities—a proven strategy for promoting better health, increased employment, and earnings and educational attainment for low-income residents. Second, the proposals would promote vigorous revitalization of high-poverty communities, thus empowering residents through improved lives and employment. This would reduce the imperative that people move away from communal ties to existing and familiar supports in search of secure, affordable housing.

The historic roots of housing discrimination

Matthew Desmond, an assistant professor of sociology and social studies at Harvard University and affiliate of the Institute for Research on Poverty, recently outlined the severity of the housing challenge that poor Americans face. He noted that rising housing costs, stagnant or falling incomes among the poor, and a shortfall of federal housing assistance means that the poorest households now spend more than half of their income on housing. Specifically, he wrote:

These problems still persist today. In fact, a recent study from Stanford University found that black and Latino families need to earn more than white families to be able to live in certain neighborhoods. When attempting to purchase a home, black and Latino borrowers continue to be victims of discriminatory lending practices, often paying higher interest rates than whites with similar incomes.

The roots of housing discrimination, particularly as it affects black Americans, extend deep into the nation’s history. Slavery shaped the early housing options for blacks who were brought to a new world for plantation labor. Over time, as slavery was replaced by institutional and economic forces that limited African American participation in civic and community life, their housing choices followed a pattern of inequality in keeping with their status in the nation.

Well into the middle of the 20th century, write Douglas Massey and Nancy Denton in their seminal 1993 book American Apartheid: Segregation and the Making of the Underclass, residential segregation of black Americans was “an almost permanent feature of housing patterns in the United States.”

It is worth noting that the melting pot theory of immigrant assimilation failed to blend African Americans into a homogenized nation. Meanwhile, successive waves of ethnic newcomers—particularly from Europe—tended to migrate into enclaves or ghettoes during the early part of the 20th century. No other ethnic group in U.S. history has endured the persistent residential isolation forced upon black Americans.

In the period spanning the middle of the 20th century, roughly from 1930 to 1960, housing discrimination was a feature of local, state, and federal policy as blacks migrated from the rural South and crowded into urban communities in the North. Such policies produced federal housing programs that lumped African Americans into highly segregated ghettoes.

Lenders, with the encouragement of the federal government, employed underwriting rules that preferred and sought to maintain racially white neighborhoods, a now discredited practice called redlining. Federal agencies financed nearly half of all suburban homes in the 1950s and 1960s, boom years in the creation of middle-class America, boosting homeownership rates from nearly 30 percent of the population to more than 60 percent by 1960.

Of course, black applicants were left out. By one analysis, 98 percent of the loans approved by the federal government between 1934 and 1968 went to white applicants. Intentionally discriminatory housing and lending practices are unquestionably at the core of the hypersegregation of black Americans in urban communities.

Efforts to change this—the 1968 Fair Housing Act, the 1974 Equal Credit Opportunity Act, and the 1977 Community Reinvestment Act—have been palliative, piecemeal, and not thoroughly effective. This has left large swathes of American communities with the perception, real or not, of intractable poverty, high crime, and ineffective schools. Massey, for example, found in 2015 that while hypersegregation is on the decline—from 40 cities in 1970 to 21 in 2010—it has yet to disappear from the American urban landscape. Worse, Massey noted the degree of segregation within the remaining hypersegregated cities has changed very little.

Despite the passage of the Fair Housing Act in 1968, which outlawed housing discrimination, subsequent decades of local, state, and federal public policies continued to support de facto segregation. These policies included redlining, the government’s explicit refusal to insure mortgages for people of color, and local zoning rules that still obstruct affordable housing and promote segregation today.

Given the connection between place and opportunity — through good schools and high-quality public health and recreational services — full compliance with the Fair Housing Act would help ease racial inequities, reduce segregation, and strengthen many American communities. To achieve this goal, an effort to combat housing segregation must be waged on two simultaneous fronts: 1) expansion of tax incentives that encourage low-income housing in affluent areas; and 2) low-income community revitalization policies that encourage residential and commercial development in poor and primarily communities of color. Both of these approaches have the ultimate goal of producing an increase in the supply of affordable housing for low-income households.

CAP argued for these ideas in a 2015 report, “An Opportunity Agenda for Renters.” In particular, the report called for an expansion of the Low-Income Housing Tax Credit, or LIHTC, program, which would be especially beneficial to producing incentives for an expansion of affordable housing in wealthier neighborhoods. Such housing is scarce in these neighborhoods and faces enormous community opposition.

The LIHTC began in 1986 and is responsible for funding about 20 percent of federally supported, multifamily developments. Federal, state, and local governments spend more than $97 billion annually on housing assistance, including the LIHTC, to provide developers incentives to construct affordable housing.

Specifically, the report makes a compelling argument in support of federal efforts to beef up LIHTC funds and do so in a manner that allows for increased mobility to assist low-income households:

[A]ny additional LIHTCs generated through an expansion should be allocated proportionally to states based on their demonstrated shortage of affordable and available units for very low-income households.

Beyond its expansion, the LIHTC program should be targeted so that it better serves low-income households, enables more households to live in high opportunity neighborhoods, and supports the revitalization of distressed communities.

Similarly, the second prong calls for targeted attention to allow residents to retain occupancy in their existing homes. In addition, the Obama administration has offered to provide communities with federal funding support aimed at affordable housing in order to encourage local officials to develop comprehensive community revitalization plans. Such plans would then address the manifold concerns that low-income residents face, including poor transportation, limited education opportunities, access to healthcare, diminished economic activity, and exaggerated rates of crime.

On July 16, 2015, the U.S. Department of Housing and Urban Development, or HUD, announced the rule known as Affirmatively Furthering Fair Housing. This rule, issued under the authority of the Fair Housing Act, provides flexibility for state and local governments and public housing agencies to reduce segregation through the encouragement of fair housing.

The implementation of this rule will “provide publicly open data for grantees” of HUD funding, allowing them to more clearly analyze the status of fair housing within their area. It will also allow for local decision makers to determine priorities and goals based on community needs.

Given the correlation between a child’s ZIP code and their likelihood of success later in life, it is important that policymakers take these steps to ensure that communities offer affordable housing that allows for the expansion of children’s opportunities.

A growing library of research affirms that communities are not adversely affected in terms of price or resale in surrounding neighborhoods by the inclusion of affordable housing. In Montgomery County, Maryland, for example, local officials have done just this, insisting private developers build affordable housing in any new projects and moving resources to schools that have the greatest need. The net effect has been to increase affordable housing in affluent areas while simultaneously spreading community resources in a targeted effort to improve lower-income communities and make them more attractive to students and families at all income levels. As the Montgomery County projects attest, creative and well-considered local, state, and federal policy approaches can work to make affordable housing a reality for all Americans.

At the same time, HUD officials say that they want to reduce subsidies for low-income communities so voucher recipients have incentives to move to more affluent communities. “We want to use our housing-choice vouchers to ensure that we don’t have a concentration of poverty and the aggregation of racial minorities in one part of town, the poor part of town,” said Secretary Castro, according to the New York Post.

The legacy of economic and racial discrimination in housing is not accidental. A long history of private practices and public policies produced a system of segregated housing patterns, which today gives way to vast discrepancies in access to housing for low-income households. Past efforts to resolve the disparities have proven ineffective, at best, and counterproductive, at worst.

As described here, CAP suggests that serious and tough-minded enforcement of the Fair Housing Act would provide assurance of the national will to provide affordable housing for all. But more work is needed. Local and federal officials must employ a two-pronged approach to promote access to more affluent communities for low-income households as well as the revitalization of neglected communities where a majority of poor Americans live.

The policies encouraged in this brief promise benefits that go beyond mere bricks and mortar. Indeed, a house is a building, but having a safe and secure home to call one’s own is a fundamental component of building a prosperous community and nation.

Sam Fulwood III is a Senior Fellow at the Center for American Progress. Jamal Hagler, Research Assistant on the Progress 2050 team at the Center, contributed to the text box in this brief.