By Juan Miret
Hispano de Tulsa
TULSA, Oklahoma – About 90 years ago and close to downtown Tulsa there once flourished a vibrant community, so prosperous that it was defined as the Black Wall Street.

It was the Greenwood district, home to 15 grocery stores, four pharmacies, two newspapers, two public schools and two theaters. However, a race riot literally turned the area to ashes as a result of a massacre that began on the night of May 31, 1921. 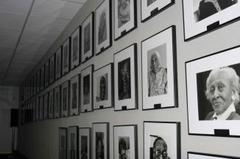 “That has been the biggest race riot in this country,” said Hannibal Johnson, a lawyer and writer, as he was walking through a gallery of photos of some of the survivors of the riot. The display is at the Greenwood Cultural Center, 322 N. Greenwood Ave.

“The disease of racism still exists, therefore the Tulsa Race Riot cannot be hidden,” Johnson said. “We have to recognize what happened in the past, learn the lesson and move forward; otherwise, it will happen again.”

In 1921, the United States was an example of freedom, respect and tolerance for the rest of the world, especially after World War I. But in Tulsa, the reality was different. Some people did not accept that an African American neighborhood could have doctors, lawyers, bankers, dentists, pharmacists and an extensive list of professionals, explained Johnson.

According to historical accounts, on the morning of May 31, 1921, a young African American named Dick Rolland supposedly tripped into Sarah Paige, operator of an elevator, who shouted “rape.”

Rolland was immediately taken to the city jail and hours later the Tribune newspaper announced a lynching. To date there is no copy of that edition, and Paige never filed charges against Rolland.

To oppose the possible lynching, a group of unarmed African-Americans took a stand on the railroad tracks that divided the Greenwood area from …