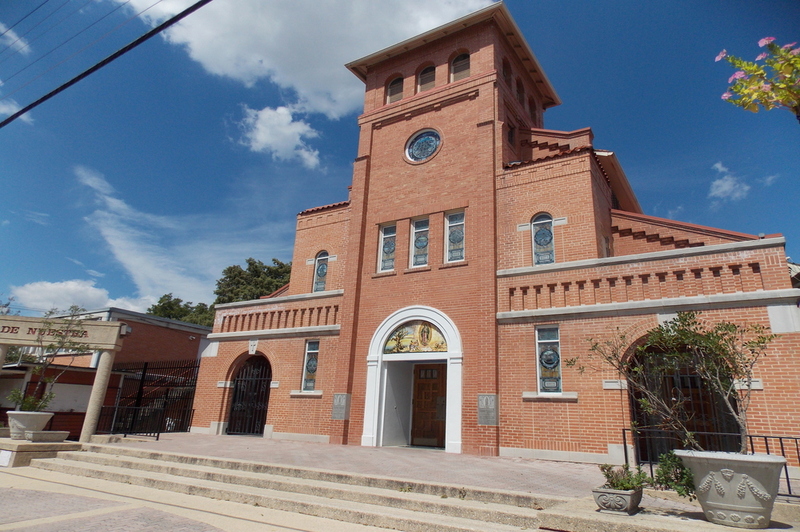 On the Westside of San Antonio, Texas, along El Paso Street where men on bicycles sell paletas and among the early 20th century “shotgun” houses, sits the quaint church, Our Lady of Guadalupe.

The church’s pastor, Father Brian Christopher, is new to the San Antonio area, but he’s no stranger to the issues that his fellow Jesuits are advocating for and what Catholic churches across the country are lending a hand to.

That issue is the unprecedented number of unaccompanied minors from Central America who arrived at the Texas-Mexico border largely in 2014, some of who made their way through and are now even seeking shelter in San Antonio.

“We have not just women and children, but men too who have no legal rights here—very few legal rights here—and who’s going to take care of them? And they do get abused—terrible, terrible stories of abuse while they make this journey,” said Christopher.

Organizations throughout San Antonio are offering assistance to the unaccompanied minors.

Beth Green, director of development at St. PJ’s Children’s Home in San Antonio, works with the children as soon as Border Patrol picks them up and brings them to her facility.

Green said St. PJ’s Children’s Home has been caring for the unaccompanied minors from Central America for about three years, but 2014 was the banner year in which they arrived to the United States in large numbers. Green said the facility currently cares for just fewer than 1,000 undocumented children ages five to 17. St. PJ’s offers many resources such as shelter, three meals a day, snacks, clothing, six hours of education a day—including learning English as a second language—and counseling.

Green said counseling is one of the most important resources St. PJ’s offers the children since they’ve escaped dangers from their home country.

Green said on the journey to the United States the children are met with the same dangers, as well as being used as drug mules. The youngest unaccompanied minor Green has seen at her facility was seven years old.

Seven might sound young, but sometimes they make the journey even younger.

Dulce Morales, medical coordinator for the Refugee Services program in Catholic Charities in San Antonio, said the youngest child from Central America she’s been aware of through her program was just two years old.

Although it seems like the children have overcome all obstacles once they arrive in the United States, they then must locate a relative with adequate housing, and that’s where Morales’s program comes in. Once Refugee Services identifies the unaccompanied minors in San Antonio and the potential sponsors (family members or friends), their job is to make sure the sponsors are willing to take on the responsibility of that minor and that adequate care will be met.

Morales said conducting home visits and interviews with potential sponsors requires her to be very alert in order to pick up on any signs that the child won’t be cared for properly.

“You go sit and have a conversation and be very receptive about what’s being said,” she said. “You have to do a walk-through of the home that the minor will be coming into, and sometimes you feel like the parents really need them but the safety of the house or the location—it’s not the best.”

Our Lady of Guadalupe Church has done everything from putting together Courage Kits for Catholic Charities to distribute to the refugees—kits with toiletries, clothing, snacks—to having volunteers at the Greyhound bus station greet the women and children who arrived in San Antonio after being released from Immigration and Customs Enforcement detention centers.

Christopher said this task is important in order to help the women and children figure out what they need to do and where they can go.

“I know of at least one instance where a person was dropped off here out of detention, and their bus had left a day prior to their release, so what are they supposed to do? These become prime targets for human trafficking, or other crazy things,” he said.

Catholic Charities can no longer use their volunteers at Greyhound, Christopher said, because the bus company kicked them out of the bus station a few weeks ago.

Christopher said in July when they heard women and children refugees were to be released from ICE detention centers, his church and other local Catholic churches tried to find housing arrangements. Our Lady of Guadalupe offered the apartments on its grounds to the refugees, and Shirley Gonzales, the city councilwoman for District 5, made phone calls to a hotel association to see if they could also help.

Christopher said as soon as his church found out the releases were happening, they needed more information in order to properly help the refugees.

“We realized here on the ground that we needed data,” he said. “If we knew when the people were being released, and if we knew how many per day were being released, then we could make adequate arrangements, and it’s in nobody’s best interest to have these women and children wondering the streets of San Antonio.”

Christopher said when his church called the corporations that own the Texas detention centers that were releasing this particular wave of refugees—CCA and GEO—in order find out information about the releases, the companies were “totally unresponsive.”

Our Lady of Guadalupe is staffed by mostly Jesuits, and they have a national organization based out of Washington D.C. Through them the church was able to get a hold of someone at ICE.

“It wasn’t incredibly helpful, but I think that what it does do is let’s these companies know that they’re not going to get away with treating people like this, and that people are watching…on a local level and we’re reporting to a national level,” said Christopher.

What Christopher is referring to are the number of reports filed against CCA and GEO for mistreatment of their refugees—­sexual misconduct at the Karnes County Residential Center (GEO) or being denied medical care at Dilley’s South Texas Family Residential Center (CCA)—and reports of the release of women and children from their detention facilities during the middle of the night.

Although the detention centers owned by CCA and GEO have the same contract with the government to care for the refugees as places like St. PJ’s Children Home, the difference is CCA and GEO are for-profit correctional companies, and St. PJ’s is a nonprofit.

“Everybody has the same contract with the government—and it’s pretty standardized across the board—I think the difference is how they provide the services,” Green said. “We provide a home-life environment for our children. At other places it’s definitely more of a shelter, like an area room, and, not that there’s anything wrong with that, but we want our children that come to our facility to feel like they’re at home and that they’re safe.”

Although Our Lady of Guadalupe Church might be small in comparison to Catholic Charities and other organizations that work with the refugees, they have no fears about going straight to CCA and GEO with their concerns.

Christopher said the San Antonio community has been very receptive to helping out the refugees.

“People were phenomenally responsive, now whether some of that was a sense of kindred feeling, like ‘my parents were immigrants here, we need to step up our game,’ or that was their sense of responsibility as Catholics,” he said.

There are many ways people can get involved through these organizations to help the refugees—St. PJ’s Children’s Home always accepts new clothing donations (no used clothing), and personal care items (shampoos, soaps). Through training, a volunteer could even work directly with their international children. The Catholic Charities website offers a variety of volunteer options, one of which is to tutor a refugee child.

Green said when her CEO James Castro was asked why St. PJ’s takes care of children who are coming across illegally, he said: “If you saw a child standing on the side of the road who needed help, would you stop and ask what country that child is from?”

{Editor’s note: This story is the second in a series – Children on the Edge – produced by Texas State University interns for VoiceBox Media in partnership with the Austin American-Statesman, Latina Lista and other media organizations. The series will examine how six Texas communities are responding to the number of migrant children and their families who have fled their Central American homes.

Sophia Campos is a 21-year-old student at Texas State University who enjoys meeting new people and traveling to new places. You can find her either chowing down on Tex-Mex food in San Antonio, or spending time on the Texas State campus: the best school on earth!