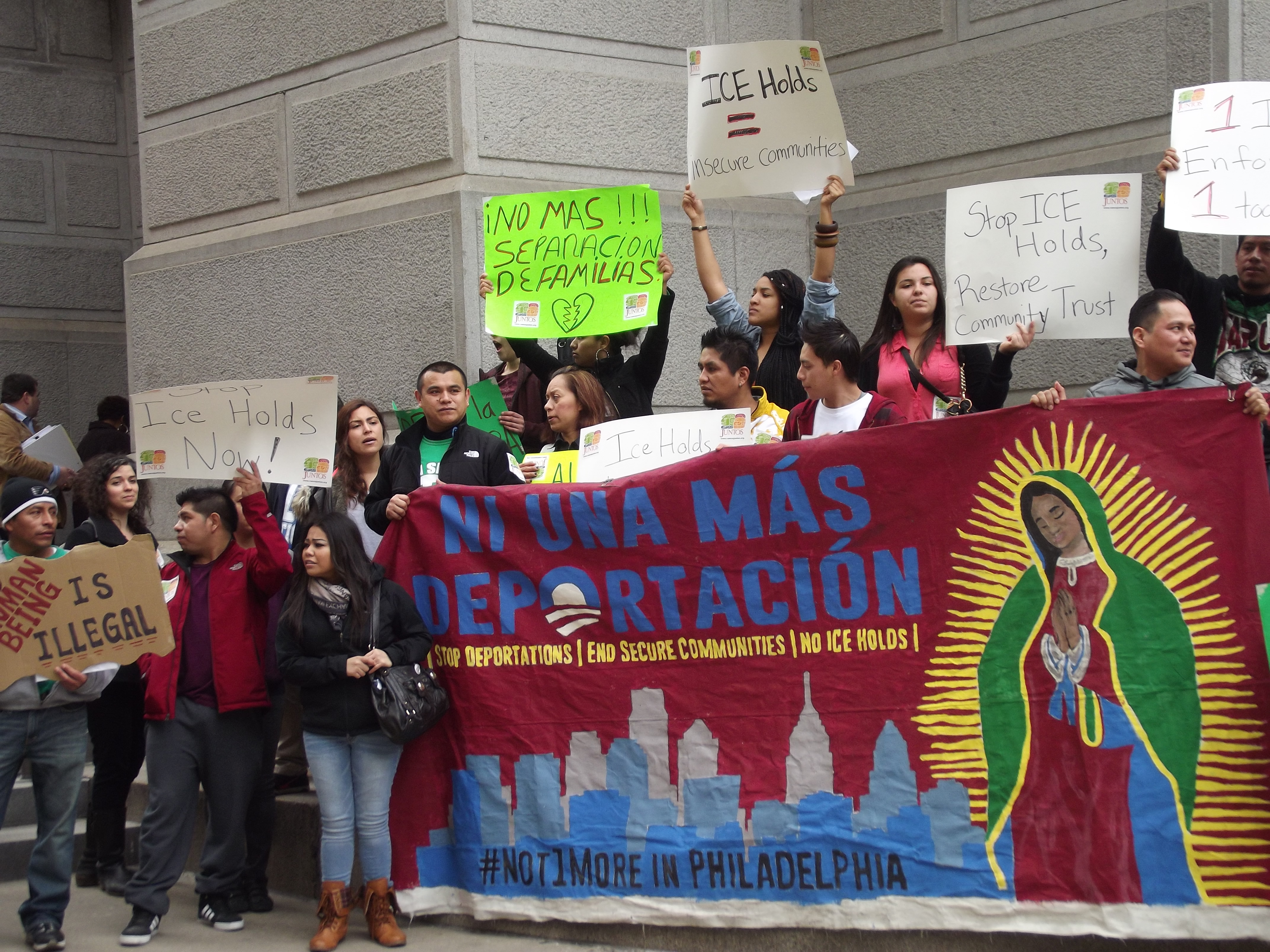 Philadelphia – “Sin Papeles, No Miedo.” Without Papers, We’re Not Afraid.” For more than five years, this was the defiant cry of immigrant advocacy groups fighting against the collaborative relationship between local law enforcement and federal immigration officials.

The chant that had launched marches, demonstrations, prayer vigils, sit-ins and even arrests was fully heard by Mayor Michael Nutter and his administration on Wednesday, as the city announced a dramatic alteration in immigration policy.

Just four minutes into his testimony, the Nutter administration’s Director of Public Safety, Michael Resnick, announced that Mayor Nutter would sign a directive to, “preclude the Philadelphia Police Department from honoring all ICE detainers, except those where the individual is convicted of a felony in the first or second degree, and where ICE has secured that detainer with a warrant.”

A smattering of applause greeted the dramatic policy shift; along with the resonant voice of a woman, “Not a single ICE Hold.”

Accompanied by Jennifer Rodriguez, the Director of the Mayor’s Office of Multicultural Affairs, and Deputy Director Fernando Trevino, Mr. Resnick then cited the recent Federal Third Circuit Court ruling in the Galarza case, which found that regulations regarding ICE detainers should be deemed “permissive” and considered as “requests.”

The Director of the Department of Public Safety elaborated on the expected effect of the policy change; saying, “the vast majority” of defendants will have their cases adjudicated in the local criminal justice system and “any ICE detainers will be disregarded.”

The “only circumstances” where the city would not disregard ICE Detainers would be where an individual has been “convicted” of a serious felony, such as aggravated assault, murder, kidnapping, human trafficking, rape and robbery. Mr. Resnick added, that ICE will still have to “obtain a warrant” for the individual.

Any individual convicted of minor and summary offenses, or traffic violations, continued Mr. Resnick, “will no longer find themselves facing deportation proceedings.”

“This is your Victory,” said Councilwoman Maria Quinones Sanchez, to cheers that poured down from a City Council Chamber’s balcony that was partially filled with advocacy groups, that included, the New Sanctuary Movement, Juntos, the Pennsylvania Immigration and Citizenship Coalition and 1 Love movement.

A delighted Councilman James Kenney gave the Nutter administration a “99.7” grade in addressing the concerns of an immigrant community that historically, has been “afraid” and intimidated by the police and any type of interactions with government.

Recalling how former Police Commissioner John Timoney, nine years ago, had sought to allay the fears of a “flourishing Indonesian community” by a visit to South Philadelphia’s St. Thomas Aquinas church, Councilman Kenney praised Mr. Resnick, the Mayor, and the advocacy community for moving the city closer to becoming an “Immigrant-friendly city.”

After referring to federal government’s “refusal” to deal with the “complicated issue” of undocumented immigration, Councilwoman Quinones Sanchez characterized the administration’s new policy as an “important step,” and urged Mr. Resnick to “utilize the advocacy” community “in this room” as a resource as it proceeds to design and implement its policy.

Focusing on the “implementation” of the executive order, Councilwoman Quinones Sanchez questioned Mr. Resnick about data collection, ‘cost analysis,’ and the type of training that will be undertaken for those carrying out the policy.

On the question of training, Mr. Resnick replied, that “relatively few people needed to be trained.”

Under the “Secure Communities” program, introduced by President George Bush prior to leaving office, those arrested had their fingerprints sent not only to the F.B.I., but also to the offices of Immigration and Customs Enforcement (ICE). The program effectively created an ICE presence in thousands of police departments.

According to a 2011 study by the Earl Warren Institute of Law in California, the Secure Communities program was a “strain on local resources,” and resulted in mistaken ICE detentions of more than 3,600 U.S. citizens, (the circumstance in the Galarza case.)

The Chairman of the hearings, Councilman Curtis Jones, early on, framed the objective of City Council as that of determining how the city could better “interact” with the immigrant community, and whether law enforcement’s “time can be better used defending the things we can.”

Witness testimony from several individuals representing immigrant advocacy groups spoke on a variety immigrant-related issues: from gangs and arrests of innocent parents, to the language and cultural barriers facing those fleeing poverty or oppression.

But the two salient themes that were reiterated throughout the testimonies, were: the “immigration system and criminal justice system” should be distinct and “separate.” The other, that families had come to the United States with the belief it stood for the principle, “everyone deserves a second chance.”

James Smith is a reporter for El Hispano in Philadelphia.