Latina Lista: News from the Latinx perspective > Causes > Latina channels personal pain of losing mother to deportation to helping other children of deportees

I dedicate this to my Mommy. I say Mommy, well, more like Mami, because that’s exactly what I called her, being Hispanic. 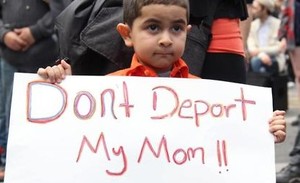 Not mom, mother, or god forbid, by her first name, which happens to be a beautiful name by the way — Ligia Elena Cano.

Don’t let this sweet, elegant name fool you though. She is one of the strongest, most vibrant, intelligent, independent women I know. She is also my best friend. From my earliest memories, she was always my world.

Being a housewife, she and I spent every day together. Shopping, cooking, playing, we were inseparable and still are thanks to the Internet!

We talk almost every day and see each other via webcam every chance we get. Our Internet visits started about four years ago. Mami and I look forward to seeing each other. Each time is like the first time.

We aren’t the only two who benefit from this online family reunion. Alysha, my nine-year-old daughter, and the rest of the family do too. It’s very important to me that Alysha sees and talks to her grandmother. After all, Alysha only met her once, when she was six months old. This is where I begin to explain just a little bit of who I am today and why family is so important to me.

It was the first day of my junior year in high school. My brother was starting the fourth grade. My mami, my brother Omar and I were walking to our car when out of nowhere a white BMW, two black Cadillacs and another car surrounded us. We stopped in our tracks as we watched DEA agents jump out of the car. I can’t even remember if they had their guns out.

They said that my mother was being placed under arrest. I stood in shock. I could not fathom what was going on. My mind & body were numb to the core. I remember feeling like I was having an out of body experience — it was as if I was flying out of my body and just watching everything unfold from a distance.

I watched the agents handcuff my mother. All she could do was look at us with her worried face. I think I ran to tell my sister Janet who was sleeping at our apartment, which was only 100 feet away — but I can’t remember. What I do remember is seeing my sister lose it, my brother in tears screaming and shouting “DON’T TOUCH MY MOTHER!” “LET HER GO!”

I was still numb and still just watching the whole scene as a detached bystander. It wasn’t until I realized this wasn’t a bad dream that I started to cry and hugged my mom with all my strength. I was telling her we would be fine, that we would see her soon and she would be ok.

Yes, me, her second child, a fifteen-year-old was assuring her mother. I only wished and prayed it was true. Little did I know it would be far from the truth.

My mother served about four years in prison. She was accused of possessing drugs and conspiring to deal them. It was in fact my father who was involved with the drugs but a “family friend” pointed the blame at my mother. There was nothing she could do to convince authorities she was innocent.

The first year she was in jail, my sister, brother and I stayed in Florida so that we would be close to her. However, visiting her in downtown Miami wasn’t how I pictured weekends with the family but it was better than not seeing her at all. For her good behavior, my mother was moved to a camp in Coleman, Florida to finish out her sentence for the next three years. My siblings and I decided to move back to New York — back to a little one-bedroom in Williamsburg, Brooklyn.

We, as a family came together. We united, just the three of us. Of course, it was my mother’s one and only request — that we would stick together no matter what! And to this day, we still do.

Our other relatives came to help us when we needed it, yet it wasn’t the same. What happened to my mother had a domino effect. Not only did it affect our immediate family, it affected every one of our family members. My mother was that person who was the glue that kept the family together. It felt as if my whole extended family was lost without her.

After we passed our grieving period, the whole family came together counting down the days when she would be released and we could be a real family again — but it wasn’t to be.

The same day my mother was released from her sentence was the day we went to see her, welcome her back into society — and say our goodbyes.

On September 25th, 2002, my mami was freed from jail, but only long enough to give us each one last hug good-bye before being deported to her hometown of Medellin, Colombia.

The heartbreak of her being so far away and having to wait seven years before she could even think about coming back to see her children and grandchildren just kills us on a daily basis. But we are a family, a strong family and we will prevail, like before.

For that reason, family is the most important thing in my life. The experience with my mother has taught me to never take family for granted — no one ever knows what can happen.

Yet, even with so much sadness, I am fortunate to have inherited one of my mami’s best qualities — finding a silver lining. I have always wanted to reach out to the children that were and/or are in my position. It’s an unique bond that we share. While many people, even other family members, may want to help, no one knows how children of deported parents feel or what they are going through, unless they are a KiD.

KiD stands for Kids of International Deportees and it is the name of a new non-profit I am starting. The organization will help these children of deportees with social, financial, employment, education, legal and mental health concerns in their lives.

For now, I plan to focus on children in grades three to high school and who live in the New York City area. I have outlined my mission statement on my tumblr blog.

Living my life as a child of a deported parent has given me a mission in life to turn a bad situation into something good for others.

So, I dedicate my mission and my life to my mother.

Jessica Papa was born in 1982 in Queens, NY and raised between New York and South Florida. She is the founder of KiD — Kids of International Deportees.

children, deported parents, featured, immigrants
Previous Post Latina Cubicle Confidential™ — Do You Get Your Social Media Fix at Work, Too?
Next PostHispanic leaders, experts weigh in on "Obamacare"

Latina Cubicle Confidential™ — Do You Get Your Social Media Fix at Work, Too?
Comment
Hispanic leaders, experts weigh in on "Obamacare"