Latina Lista: News from the Latinx perspective > Causes > Philanthropy > Report shows Latinos have their own definition of philanthropy

Report shows Latinos have their own definition of philanthropy

LatinaLista — There’s been a long-held belief that the average Latino household doesn’t give to charities. According to a new study, it’s a belief that should have been recognized as an urban myth long ago. 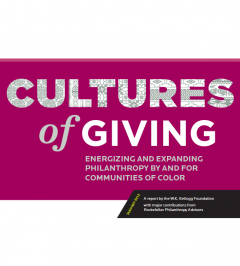 This month, the W.K. Kellogg Foundation released the report “Cultures of Giving: Energizing and Expanding Philanthropy by and for Communities of Color.” The report’s authors found that Latinos are philanthropists — and have always been.

Our methods are just a little unorthodox compared to the traditional view of giving.

Since philanthropy has always been associated as the “rich giving to the poor,” most Latinos have never identified with that definition. In fact, it’s a perception that has been a major turn-off in communities of color say the report’s authors and one of the reasons why philanthropy has been such a hard sell in these communities.

Instead, another form of philanthropy took root long ago in communities of color. Mainstream philanthropy organizations are only now taking notice of this other version and putting the best label they know to describe it — they call it identity-based philanthropy. Basically, it describes a type of philanthropy that gives back into the same community.

In response, community donors are directing their contributions inward, building their advocacy skills to draw services to their communities and partnering with local government, business, and others to address critical needs.

Together, these trends are propelling the field of identity-based philanthropy forward, enabling and empowering people of color to take a stronger leading role in addressing both urgent issues and long-term social change in their communities.

An ironic discovery made by the report’s authors when researching philanthropy among communities of color is that this kind of “neighbor helping neighbor” has been so ubiquitous in these communities all along that people rarely recognized it as philanthropy, and so it was never reported as such.

Yet, there’s no denying that the traditional way of giving, with money, remains an important factor in philanthropy of all kinds. Traditionally, when Latinos practiced identity-based philanthropy money was given to organizations that funded scholarships and professional advancement. Nowadays, the field, depending on your outlook, is much wider or more crowded.

The majority of Latino philanthropy remains concentrated in funding educational goals (27 percent) followed by health initiatives (11 percent) and split evenly between the arts and civic activities (9 percent each).

The Latino community was also the only community to place high significance on funding for legal services and programs related to civil and immigrant rights.

The report found that the more communities of color expanded in practicing identity-based philanthropy, the more they amplified their own voices and were able to gain influence far beyond their own communities.