Spotlight: Committing to doing 26 Acts of Kindness in memory of Sandy Hook victims

LatinaLista — As horrible as are the murders of the 26 children and teachers of Sandy Hook, the stories of the acts of kindness the nation has showered on the residents of Newtown, Connecticut is not only heartwarming but redeems humanity at its most basic level. 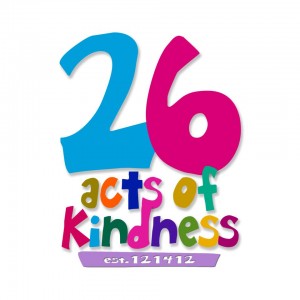 From an anonymous donor who bought a cup of coffee for everyone in Newtown who stopped at a local coffee shop to a woman collecting teddy bears to give to every student of Sandy Hook school, the random acts of kindness, in the spirit of the murdered victims, has gone a long way.

There is now a national movement, 26Acts, started by NBC correspondent Ann Curry, who had tweeted on December 14:

It wasn’t long before Curry’s tweet captured the attention of not only the Twittersphere but her bosses at NBC who created a special section on their website dedicated to 26 Acts.

On the site, Curry explains how she came up with the idea:

…After the experience in Newtown. I thought, “What if? Imagine if everyone could commit to doing one act of kindness for every one of those children killed in Newtown.” So that’s what I tweeted. And guess what? People committed. I said in my tweet, “I’m in. RT if you’re in.” Not only did they commit to 20 acts of kindness, they wanted to up it to 26 acts of kindness for every child and adult who was lost at the school. Some even debated maybe we should include the mother, who died, at 27 acts. Some debated maybe we should include the killer as well as he was struggling and in pain.

On this Friday before Christmas, instead of highlighting a worthy non-profit that does good to help others, I thought it only right to further Curry’s tweet among Latina Lista readers and challenge each of us to take our turn at helping others by doing 26 Acts of Kindness — in the spirit of La Navidad and in memory of 26 lives taken too soon.