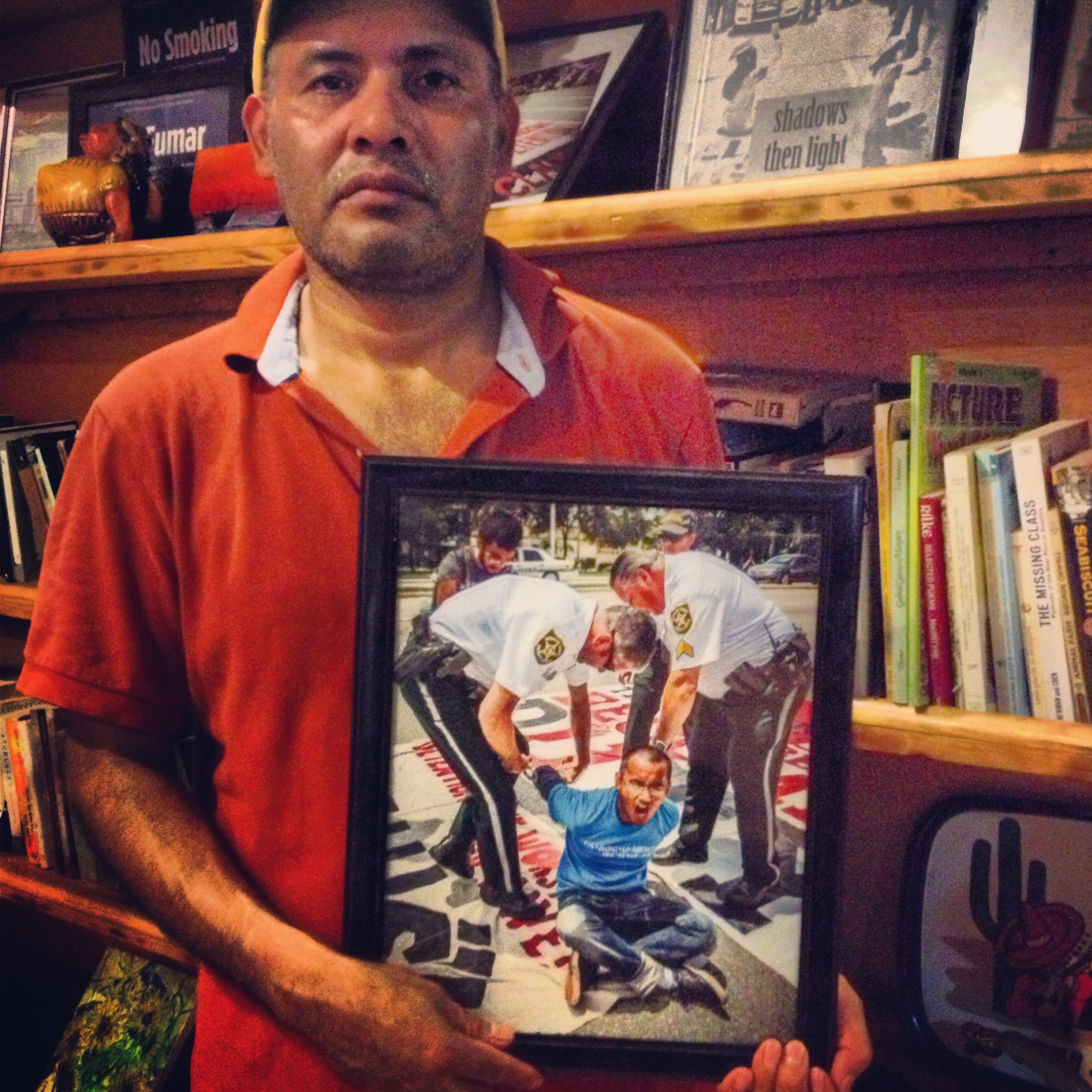 Marco Saavedra’s dad is torn by the path his son has taken and wishes he could come back to the family business in The Bronx.

Antonio Saavedra wishes good luck and says goodbye to the voice of his son Marco at the other end of the line, then hangs up the phone one last time, and comes out of the pantry to continue with the daily work at his restaurant in The Bronx.

Marco, ‘el hombre de la casa’, the man of the house, is away on a mission his dad does not fully understand but reluctantly supports.

“Why is he gone?” Don Antonio asks. “He says this is the only way he can help people. I tell him that in order to help people he has to have his own, to look after himself first. I would love to see him get a job and start working.”

But his son does not see it that way. For the past couple of years, Marco, 22, has been a leader and an organizer with the National Immigrant Youth Alliance (NIYA) who pushes for an inclusive immigration reform.

Like many of the NIYA members, the young Saavedra has defied authorities in public civil disobedience actions, gotten arrested, and, at least in his case, sent to a detention center, the last stop for immigrants before getting deported back to their countries.

That is just one of the many things that worry Don Antonio, 42, who says he does not know another life but that of a working man and wishes his son shared this ideal.

“Like we say in Mexico, ‘man was made for work’. And that is how I have lived my life, always making money because I work very hard,” he says. “Marco is inexperienced and only knows the easy life of America. He doesn’t know how hard it is in Mexico.”

That Mexico that he and his family left two decades ago is back on their minds because Marco, along with two other organizers, flew down there to meet with at least four other undocumented youth to stage their most radical and dangerous protest yet, risking not being able to come back into the country because of their immigration status.

Just like at any other Dreamer rally, these young activists put on caps and gowns and walked to the Nogales port of entry to demand to be allowed back home under a humanitarian parole to be reunited with their families in the US.

Up until this story went online, Customs and Border Protection had informed that nine demonstrators had been detained and sent to the Florence Detention Center.

As this unfolds, Don Antonio wonders what is next.

“I ask myself, ‘and now what? Where does this end? When is it going to be enough?’ I don’t know where this is going to stop,” he says. “He doesn’t ask for permission; he only lets us know what he’s going to do and leaves”.

It might be an irony of life or merely a grim coincidence in the eyes of Don Antonio. Almost 20 years ago, he brought Marco and his sister Yajaira through that same port of Nogales when both of them were toddlers.

“It was easy because crossing back then was not as difficult as it is right now. That’d be impossible today,” he says. “We walked across that same border, just like that in five or ten minutes and we were already here. Marco looked so happy. He had a big smile on his face.”

Nonetheless, Don Antonio is also quick in highlighting the qualities of his son.

“He’s a smart, upright man and I do admire what he does, because one has to be brave to do it,” he says. “It only hurts as a parent to think that something could happen to your son.”

And it is here, at the point where the admiration for his son meets with the ideals of what his son should do with his life, where the conflict inside the elder Saavedra boils.

“Sometimes I think that I am the one who’s mistaken. That one day he’s going to prove me wrong and I’ll be the one asking him to forgive me for not supporting more what he does. Right now I might be in disagreement but I’m still with him,” he says.

(Featured Photo: Antonio Saavedra holds a photo of his son, Marco, being arrested in Florida in 2012. Gustavo Martínez)

Gustavo Martínez Contreras is a sports reporter for New York’s El Diario La Prensa and publishes his own blog Mojado Citizen where he writes about immigration and other issues.