LatinaLista — President Obama is still riding high with Latino voters since he announced deferred action for all undocumented youth who fit the criteria for the DREAM Act. While his critics have doubled down in trying to stir public outrage over his decision, supporters are doing their best to advise undocumented youth on what scams to avoid, how to apply for the deferment and what to do afterwards. 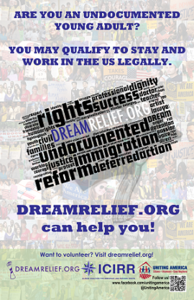 It’s estimated that about 800,000 undocumented youth nationwide will benefit from the President’s decision. Since the announcement, undocumented youth have been looking for advice and information on how to prepare for when the application process officially begins on August 15.

DREAMers in Illinois, estimated to be between 50,000 to 90,000, have had a lot of help in regard to the DREAM Act. Several political champions have been fighting on their behalf to get their plight recognized by the administration and Congress. Two of those champions are Rep. Luis Gutierrez and Sen. Dick Durbin.

Tomorrow, Rep. Gutierrez, along with, the Illinois Coalition for Immigrant and Refugee Rights (ICIRR) are holding a press conference to make two major announcements: Declare August 15 as DREAM Relief Day and the launch of a new web site to help undocumented youth understand the application process.

DREAMRelief.org is the one-stop place, mainly geared for Illinois undocumented youth but with information that any youth can use, such as: eligibility requirements, guidelines, required documentation, and the process on how to apply for deferred action.

Also, at the press conference, Rep. Gutierrez will make known the latest update on the application process that the USCIS will release on August 1st

On August 15, in downtown Chicago at the Navy Pier’s Grand Ballroom, Rep. Gutierrez, Sen. Durbin, representatives of the ICIRR, lawyers and other immigrant advocates will gather to volunteer their time to help Illinois’ undocumented youth apply for the deferred action on the first day of the application process.

Leading up to the day, the web site, DREAMRelief.org, will offer students the opportunity to register for the DREAM Relief Day, provide details on where information sessions will be held and even host an online group chat with an immigration lawyer who can answer additional questions.

According to the organizers of the DREAM Relief day, the event is historical and is due to the hard work of community organizers and the bravery of the DREAM youth who fought to be recognized and to have a future.