My Story: Undocumented and being deported

By Sorabji Swaraj
My Deportation

(Editor’s Note: Sorabji Swaraj is a pseudonym for the writer.)

Everyone who has ever been deported or is in deportation proceedings has a story. Some peoples stories are sad, others tragic, others are absurd. Mine, my friend, was the latter. 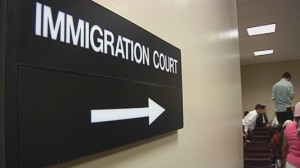 How and where did I get “busted”? Well, I’m embarrased to say that I was busted while I was using the bathroom. Yes, I was on the porcelain throne, the mighty John…I was in the crapper when a whippersnapper of an Immigration and Customs Agent (ICE) burst into my bathroom and asked me to show him where my hands were and step out of the bathroom. This guy had a gun, a badge and a mean looking face. This guy was the real deal.

I remember that day really vividly. Before that, ICE agents were to me an urban myth. A thing of legend. I had heard rumors that the immigration agents in Texas had been cracking down on international students who had overstayed their visas. For some reason I felt immune to the wrath of ICE but it turns out that my days were numbered. My day of reckoning had arrived I was about to be ICE’d.

So there I was staring at the ICE man. I had thrown my hands up in the air but I couldn’t wave them like I just didn’t care. What I was able to do was reflect on my fate. I was certain that this was the very last time I would see my apartment, my stuff, or even my wife. I scanned over my lowly possessions gave them one long look and then I turned to look at the ICE agent just in time to hear him ask, “When was the last time you were in school?”

I had been in and out of school always hoping that I would get reinstated after I had fallen out of status. Someone in the “International Student” department of a small college that I had gone to didn’t feel the need to help me understand what I needed to do after I graduated from college. Looking back, I really wish I had an international adviser who knew his stuff. I put my trust on an adviser who really could have cared less about me. I was also a young timid chap who didn’t have the courage to bug my adviser into assisting me get a graduate school or Optional Practical Training OPT.

9 years later here I was being grilled like George Foreman about where I work, and how long I’d been out of status by a real flesh and blood immigration agent. When questioned by ICE agents many people tend to freak out and lie through their teeth. All that does is piss the agents off. You don’t want to piss an immigration agent off. At first I tried to lie through my teeth but it dawned on me that they probably already knew the answers to the the questions they were asking. So I told them the truth, the whole truth, nothing but the truth.

Because of telling the truth as well as being cooperative the agent told me that he would do me a kindness and not throw me in immigration jail. He also said that he would release me on my own recognizance without bond. So that’s what happened. I was arrested, fingerprinted, photographed and let go on the same day.

As I drove home from the Department of Homeland Security office where I had been for about 6 hours, it dawned on me that my life would never be the same again. I would have to change my lifestyle, sell most of my possessions, resign from my workplace, and start planning on moving back to my country of origin. A country I had left in 1998 and had not been back to since. I was about to face an uncertain future and that realization scared the crap out of me.

Sorabji Swaraj came to the US as an international student, overstayed his visa, got caught by Immigration and Custom Enforcement agents, and now is being deported. This entry is part of his blog featuring anecdotes, advice, mistakes made, as well as, personal opinions about his situation. His hope is that it helps others who like him are going through the deportation process. He can be followed on Twitter @mydeportation