LatinaLista — A few months ago, TIME magazine profiled Latinos in a cover story about how Latino voters will choose the next president. A by-product of that story had TIME wading into the immigration debate, an issue closely associated with Latinos. This time, the magazine is lighting a fuse to an issue that has become, rightly or wrongly, synonymous with Latinos — the debate over recognizing undocumented immigrants. 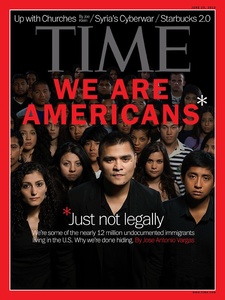 Undocumented reporter, Jose Antonio Vargas, penned the latest TIME cover story entitled “We are Americans” Just not legally*. In the piece, Vargas, who publicly revealed his citizenship status a year ago in an essay for the New York Times says that while he’s been traveling the country meeting other undocumented young people, creating a web site and sharing his story on college campuses and pro-migrant and policy forums, he lives one day at a time in a virtual limbo state.

He has expected Immigration and Customs Enforcement (ICE) to pick him up and deport him, but so far nothing has happened. He writes that because he’s never been in trouble with the law he’s invisible to ICE.

One unexpected side-effect of his public coming out last year was that he is meeting more undocumented youth taking the same brave stand.

At least 2,000 undocumented immigrants — most of them under 30 — have contacted me and outed themselves in the past year. Others are coming out over social media or in person to their friends, their fellow students, their colleagues. It’s true, these individuals — many brought to the U.S. by family when they were too young to understand what it means to be “–illegal”— are a fraction of the millions living hidden lives. But each becomes another walking conversation. We love this country. We contribute to it. This is our home. What happens when even more of us step forward? How will the U.S. government and American citizens react then?

It’s a question that his TIME cover story clearly wants to provoke. TIME publicists say that Vargas worked with photographer Gian Paul Lozza to assemble 35 young undocumented men and women, who have publicly declared their status, for the cover shot of the magazine and additional photos.

What one is immediately struck when viewing the photos is that there is no difference between these young people and their citizen peers. Each one looks like what an “American” looks like today.

In his article, Vargas does his best to explain the complexity of the illegal immigration issue, what kind of hope lies with each political party in resolving the issue and how he feels about the future. And as uncomfortable as he may feel or the average Americans he encounters when discussing the issue, Vargas realizes that it’s only by discussing the issue that misperceptions are corrected and people understand the stakes involved for these young people.

To encourage discussion beyond the article, a YouTube video was created, along with, the Twitter hashtag #WeAreAmericans.

I am 31 and have been a working journalist for a decade. I know I can no longer claim to be a detached, objective reporter, at least in the traditional sense. I am part of this evolving story and growing movement. It is personal. Though I have worked hard to approach this issue like any other, I’ve also found myself drawn to the activists, driven to help tell their story.

This is the time to tell it. — Jose Antonio Vargas

featured, immigrants, undocumented
Previous Post A new genre of music: Spanish with an English ‘swag’ to it
Next PostViolence and Insecurity in Latin America: New Survey Findings

A new genre of music: Spanish with an English ‘swag’ to it
Comment
Violence and Insecurity in Latin America: New Survey Findings