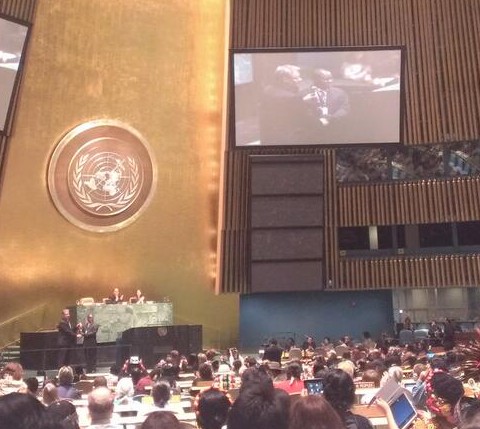 The twelfth session of the United Nations Permanent Forum on Indigenous Issues (UNPFII) began Monday, May 20 at the UN headquarters in New York City, New York, USA. During the ten-day forum, the members of the permanent forum will address six key issues relating to indigenous peoples. Additionally, this year’s forum will feature a review of policies implemented to address the previous year’s special theme, The Doctrine of Discovery: Its Enduring Impact on Indigenous Peoples and the Right to Redress for Past Conquests. Here, we’ll take a closer look at those six themes that the forum will be discussing as most relevant to the needs of indigenous peoples.

Economic and Social Development – The UN identifies the need to address the consequences of historic injustice to indigenous peoples and the common practice of both colonial and modern states of denying indigenous peoples the right to appropriately develop their communities in favor of more economically lucrative development. Indigenous peoples make up only five percent of the world’s total population, but account for fifteen percent of the world’s poor and an incredible one-third of the world’s extremely poor rural population. Studies indicate that poverty is a crushing constant in many indigenous communities – even when indigenous groups are “able to accumulate human capital such as education or training, they are unable to convert that to significantly greater earnings or to reduce the poverty gap with the non-native population,” indicating a much deeper issue than simple economics.

Environment – Though the indigenous population of the world totals only 370 million, it inhabits 20 percent of the world’s territory. Though indigenous groups have achieved increased recognition of their environmental rights at the international level, this international law has not effectively translated into reality on the national and local level. Most nations do not acknowledge indigenous peoples’ rights to their traditional territory, and even when they do, official land titling and demarcation is often delayed or ignored altogether due to politics. Though the UN calls for the free, prior, and informed consent (FPIC) of indigenous communities in issues regarding their land, many governments continue to lease out native territory to mining and logging companies without indigenous consultation or consent. Unsustainable development such as large dams and mining projects lead to the eviction or dislocation of entire communities without proper consultation or compensation. Additionally, indigenous communities often feel the negative effects of genetically modified seeds, chemical fertilizers and pesticides, the introduction of cash-crop cultivation, contamination of eco-systems, and climate change.

Culture – Indigenous peoples face the threat of extinction, not only on a territorial and environmental level, but on a cultural level as well. As the UN states, “due to being excluded from the decision-making and policy frameworks of the nation-states in which they live, and being subjected to processes of domination and discrimination, [Indigenous] cultures have been viewed as being inferior, primitive, irrelevant, something to be eradicated or transformed.” The 370 million indigenous people of the world come from over 5,000 different cultures, many of them speaking rare and declining languages. Horrifically, the UN predicts that 90 percent of the world’s 6,000-7,000 languages may become extinct within the next 100 years. 97 percent of the world’s population speak only 4 percent of the world’s languages. The loss of a language quickly destroys the sense of community. The loss of traditional knowledge and traditional food also threaten the existence of indigenous peoples.

Education – Indigenous youth face many obstacles to obtaining an education – they are more likely to be malnourished, poor, ill, tired, bullied at school, and subjected to corporal punishment at school. When they are able to attend school, they often encounter a lack of respect for indigenous life and deficit of culturally-appropriate educational material. Schools may teach individualism and competition instead of the communal and cooperative ethics valued by many indigenous groups. This has numerous negative effects on the indigenous populations. As the UN states, “when indigenous school children are introduced only to the national discourse at the expense of their native discourse, they are in danger of losing part of their identity, their connection with their parents and predecessors. They are not taught relevant survival and work skills suitable for indigenous economics, and they often return to their communities with a formal education that is irrelevant or unsuitable for their needs. They are forced to seek employment in the national economy, leading to a vicious cycle of social fragmentation, brain drain, and a lack of development.”

Health – Indigenous populations face health problems in different ways than the general population. Over 50 percent of all indigenous adults over the age of 35 have type two diabetes. The life expectancy of an indigenous person is typically 6-20 years shorter than their non-indigenous counterparts, depending on the country. Indigenous women are particularly vulnerable to issues such as tuberculosis, maternal and infant mortality, malnutrition, HIV/AIDS, cardiovascular disease, and malaria. Indigenous communities suffer malnutrition resulting from environmental degradation, contamination, loss of land and territory, and a decline in the abundance or accessibility of traditional food sources. Mental health issues stem from a history of colonization and dispossession, and along with crushing poverty lead to other societal issues such as higher rates of suicide, violence, incarceration, smoking, and substance abuse, especially in “urban areas, where indigenous peoples are detached from their communities and cultures, yet seldom fully embraced as members of the dominant society.” Furthermore, national health systems are rarely appropriate for the indigenous context.

Human Rights – Indigenous peoples are all too often victims of violence, forced assimilation, abuse, and systemic racism. Indigenous women suffer high rates of domestic violence and sexual abuse; one in three Native women will be raped in their lifetime. When communities attempt to call attention to and address their lack of human rights, their protests are often criminalized.

In addition to these six issues, the forum will also pay special attention to four cross-cutting issues: gender and indigenous women, indigenous children and youth, the Millennium Development Goals, and the challenges of inconsistent data and indicators accompanying the discussion of many indigenous issues.