Only 15 States Have Drug Amnesty Laws to Protect Overdosers, Friends 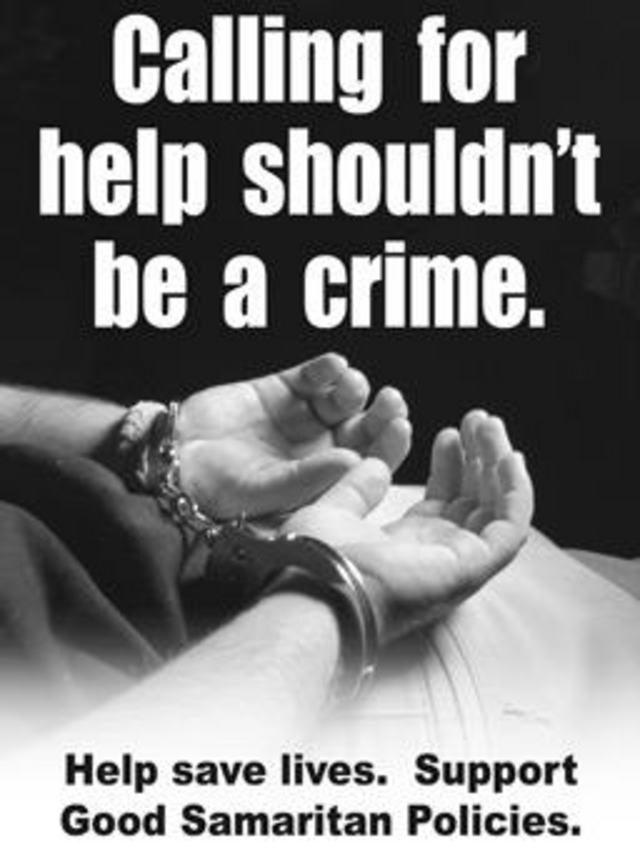 Lt. Tanya Smith of the Holly Springs, Ga., police department has worked a lot of crime scenes over the years, but nothing prepared her for a moment in August 2013 that haunts her to this day — and likely will for the rest of her life.

The body of a 20-year-old woman was found in a dilapidated trailer in a field in Jasper, a small town in the Georgia mountains, about an hour north of Atlanta. The young woman hadn’t died there, though. Her body had been dropped to mask the fact that she had died from a drug overdose elsewhere — and in the presence of friends who didn’t know what to do.

Call 911, they figured, and they could get charged with possession. Fearful of that, they chose to let the young woman “sleep it off.” She never regained consciousness and died as they sat in their apartment living room, just one room over. After discovering her death, the friends panicked, fearing they could face more serious charges. Could they be charged with murder? What should they do? They chose to dump her body in the trailer.

Smith became involved not because she worked the case, but because the body of the young woman was her 20-year-old daughter. “She was a good child, she was a sweet child,” Smith said recently, three days after Taylor would have turned 21. “She didn’t deserve to be treated that way. Nobody does.”

Taylor had been struggling with addiction for two years, even being treated inpatient. The pull of heroin was so strong she found it impossible to quit.

Smith knew her daughter had been fighting the addiction, and she lived with the fear that Taylor could end up dead. But, she said, she never could have imagined Taylor’s friends would desert her out of fear of being prosecuted.

A show of forceful emotions

Smith joined forces with several other Georgia mothers who lost children to overdoses, Georgia state Rep. Sharon Cooper (R-Marietta), and local members of Students for Sensible Drug Policy to make Georgia the 15th U.S. state to pass a law ensuring those who call 911 in case of an overdose will not face criminal charges.

These so-called Good Sam laws, the first of which was passed in New Mexico in 2001, aim to save lives by getting medical help, not criminal charges, for someone who has overdosed. The laws also protect the friend who calls 911 and stays with the person.

“What the bill basically does is just say if one person will just stay with the person, there’s amnesty,” said Rep. Cooper. Her legislative aide, Justin Leef, had brought Smith and six other mothers to Cooper’s house the night before the Georgia legislative session began to see if they could convince Cooper to introduce a bill in Georgia. Leef, a law student at Georgia State University who had lost seven friends to drug overdoses, said he believes many could have been prevented if someone had stayed with the friend and called 911.

Admitting there is a problem

The new Georgia law and others like it around the country speak to a growing, new national response to drug abuse, addiction and overdose.

Advocates say this new approach, aimed at reducing harm, is a much more effective — and life-saving — way of dealing with the reality of drug abuse. Advocates in groups such as Students for Sensible Drug Policy (SSDP) cite what they call “failed drug policies” that have resulted not only in tens of thousands of deaths each year but also untreated addicts, many of whom go to prison rather to treatment facilities.

“Yeah, drugs kill people, that’s a given. But our philosophy is harm reduction, try to save a life long enough for them to want to get treatment, which is what they need. It’s a health issue, not a criminal justice issue,” said Jeremy Sharp, 26, a member of SSDP who worked with Cooper, Leef and others to ensure the Georgia bill’s passage.

Sharp, a student at University of North Georgia in Dahlonega, spent much of his spring semester working for passage of the bill, making the two-hour roundtrip drive to Atlanta early in the morning and late at night to talk to legislators. When he felt tired or discouraged, he would look at the photo of one of his best frieds, Austin, who had died from overdose when Sharp was 22.

Sharp, kept a photo of the childhood friend who died from overdose by his bed as he worked for passage of the bill.

“It kept me going when I would get discouraged,” Sharp said. “I thought of Austin and realized I can do something to make a difference.”

“I really do think that people are saying we can’t arrest our way out of the problem,” said Corey Davis, deputy director for the Network for Public Health Law, Southeastern Region. Davis, a lawyer with a master’s degree in public health, said, “There’s been a cultural change [about drug abuse], and if we really want to address it, we need to look and see what we can do that is evidence-based and what works. I’m pretty sure it’s not kicking kids out of college.”

Davis has some evidence to back up his beliefs. Twenty-four states have laws that allow for Naloxone to be given to a person who has overdosed on heroin or another opioid, and 16 states and Washington, D.C., have passed Good Sam laws, also called medical amnesty laws.

The laws do not apply to those who deal drugs. They strictly limit the amount of a substance that can be in one’s possession. For example, in Georgia, if a person in distress has more than four grams of a solid substance drug in his or her possession at the time of the call, that person can be charged.

The Good Sam laws also aim to prevent underage drinkers from prosecution, an extension of efforts on many colleges campuses in the past decade to not bring students before a judicial council because of an alcohol overdose.

Cornell University in Ithaca, N.Y., for example, was one of the leaders in not only implementing but in studying amnesty policies for college students.

“There were two things going on,” said Laura Santacrose, health initiatives coordinator at Cornell. “First, there was evidence that the threat of judicial consequence was preventing [students] from calling in case of a medical emergency, and second, they just didn’t know.”

What they didn’t know, Santacrose explained, was simply what to do in the case of an alcohol overdose and whether to call for help.

Students also didn’t know the dangers of overdose of alcohol, the drug most widely abused on Cornell’s campus and most other universities. Many students assumed people who passed out from drinking “could just sleep it off,” she said. They didn’t know the hidden dangers, such as liver failure or aspirating.

A drug of a different danger

In 2011, the state of New York passed its own drug amnesty law, and, as in many states, it was in response to the exploding numbers of people dying from opioid, not alcohol, overdose. According to the CDC, more people between the ages of 25 and 64 died from drug overdose than from car crashes in 2011, the first time that overdoses surpassed car crashes as a claimer of lives.

From 1999 to 2011, heroin usage skyrocketed. The National Institute on Drug Abuse reports that for 2008, the number of people in the United States treated inpatient for heroin and opioid abuse was second only to the number of those treated for alcohol abuse.

Purer forms of the highly addictive drug make it possible for people to snort it rather than inject it, making it more socially acceptable to groups of people who might not have used it before. Also, wider availability of the drug has dropped its price. Ignorance about its highly addictive properties — one in four who use it will quickly become addicted — has added to its spike in usage.

“I didn’t realize it was becoming such a problem,” said Cooper of the rising number of deaths from opiate and heroin overdoses. “But after listening to seven mothers tell you about how their son or daughter was dropped off on their front lawn, dead, you can’t ignore it.”

“You know how you have your funeral suit? Well, I didn’t have anything to wear to a funeral one week because my suit was at the cleaner’s from one just a few days before. I had to have them rush it to get it out,” said Leef, Cooper’s aide. One of the students was his best friend. Had Naloxone been available, Leef said his friend could have been saved.

Betty Aldworth, executive director of Students for Sensible Drug Policy, said 2,500 lives have been saved since Naloxone laws went into effect in the various states. “That’s a pretty effective use of $10,000,” she said, referring to the cost of saving that many people at a cost of about $40 a dose for Naloxone. The group estimates that thousands more have been saved by the Good Sam laws.

More to the solution than what Good Sam can do. That said, substance abuse experts say these laws should not be seen as a solution to drug abuse and addiction.

“You’re up against a tsunami,” said Dr. Don Vereen, director of community/academic engagement at the University of Michigan School of Public Health and the director of the university’s Substance Abuse Research Center. Drug abuse is so prevalent, Vereen said, and treatment so underfunded he fears the laws can provide a false sense of accomplishment in the effort to treat addiction.

“As with many American laws, these laws are a bit incomplete. They want to wrap everything up into a nice, tidy box. But drug abuse and addiction are not neat and precise. Harm reduction should not be the end point,” Vereen said.

It is very important for the conversation to continue beyond amnesty programs and to discuss the more daunting tasks of treatment — not only how to pay for it but also how to even get people into treatment.

“The little secret about addicts, for the most part, is that they aren’t interested in treatment,” Vereen said.

Taylor Smith was interested in treatment, her mother said. The young woman found the pull of heroin so strong and the fear of withdrawal so bad that she was afraid to go through it one more time, though. Taylor told her mother that friends had told her that she could transition from heroin to meth without any side effects. Her friends said she would then find kicking the meth habit easier than quitting heroin, Lt. Smith remembers Taylor telling her about a week before she died.

“And I told her, no, Taylor, you don’t know what you’re talking about,” Smith said. Later that night, Taylor woke up in the horrible throes of the effects of heroin withdrawal.

“She was writhing on the floor,” Smith said. “And she said, ‘Mama, am I going to die?’ And I told her, ‘yes, unless you can kick this habit you will die.’”

The night Taylor died, some of those friends were in the next room as she took her last breath. Two of them later dropped her body in the trailer. Their sentences are not stiff enough for Lt. Smith.

One of them, Denise Patterson, is serving 20 years for possession of a controlled substance, methamphetamine, with intent to distribute. The other, Marty Gaddis, pleaded guilty to abandonment of a dead body, possession of methamphetamine and reckless conduct, according to the clerk of criminal court in Pickens County. He was sentenced to three years for the abandonment and possession charges and one year for reckless conduct. His sentence was suspended, however, and he is serving his time on probation.