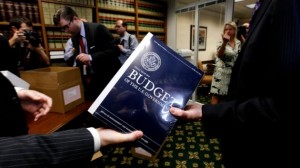 Latina women are attending college at new record rates—over 1.4 million students in 2010. Between 2000 and 2010, the percentage of Latina women in college rose from 9.7% to 13.3% amongst all female students. However, this higher education is coming at a high cost. According to the Center for American Progress, 67% of Latino students are graduating burdened with student debt.

The average student has over $25,000 in debt and the total national student debt has surpassed $1 trillion. The public has been clamoring for change to student loan interest rates and Obama’s 2014 Budget Proposal outlines a solution. NerdScholar analyzed what Obama’s proposal would mean to students, dollar for dollar.

What is Obama’s Budget Proposal?

But President Obama has proactively addressed the issue of student loans in his recently submitted 2014 Budget Proposal. Specifically, he has proposed to tie student loan rates to the 10-year Treasury bill rate. Thus, rather than have the loan rates fixed, they would depend on the health of the market. When the market isn’t as robust, in times like now, and rates are low, students would pay less interest on their loans.

Why should students care?

NerdScholar’s analysis of the impact of President Obama’s Student Loan proposal found that 4-year students would save $1,000 on average in the future. Using projected 10-year Treasury bill rates over the next ten years, NerdScholar found that a 4-year college student starting school in 2014 could potentially save up to $2,300 on her student loans.

(2) Lesson learned from the past: Students would have saved up to $1,500 if the interest rates had been tied to the market rate
This could be our chance to learn from the past. The past seven years student loan interest rates have been fixed—but what if Obama’s proposed student loan reform had been in effect? Within the past 7 years, had the student loans been tied to the 10-year Treasury bill, 4-year students would have saved an average of $1,300 and up to $1,500.

(3) Tying rates to the market can be risky: Students could pay high rates without an interest cap
Saving money sounds great, right? However, there are risks involved with tying student loans to the market. Most critics fear the chance of an inflationary period in which the rates would skyrocket far above normal rates. Currently in Obama’s proposed plan, there is no outline for an interest rate cap. Historically, when student loan rates were tied to the market, the cap was reached 5 out of the 14 years. Students were saved from paying a rate higher than 8.25% those years because of the cap. Anyone needing student loans should keep their eyes on this debate as it unfolds.

By the end of June the old fixed student loan rate of 3.4% will expire and Congress will be forced to take action. Many consider education as the underlying foundation of our nation and the key to achieving the American dream. If this nation is to reach Obama’s projected goal of reclaiming the number one spot for college graduates, one key step is to make college more affordable and accessible to everyone. The debate over the student loan rate will be a solid testing ground for the priorities of our nation.

Rachel Ny is a strategy analyst at NerdScholar, a site that provides useful financial resources for students such as scholarships for Hispanics.