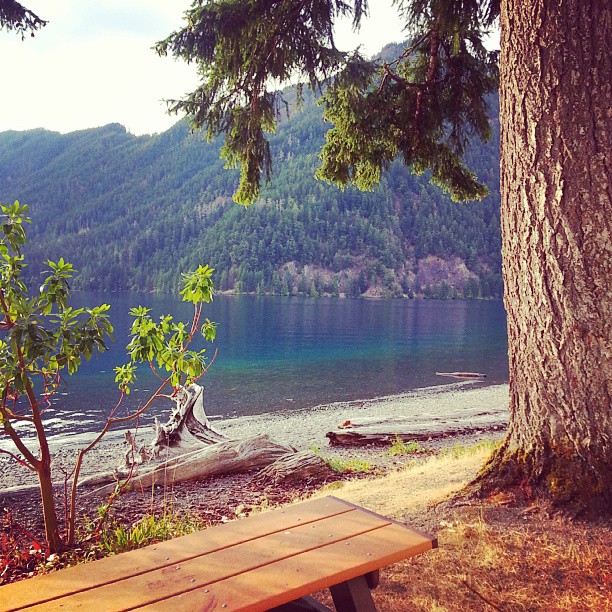 The Travelistas In Nature loved every aspect of our trip to Olympic National Park — the rain, the spiders, and all — but, there were a handful of experiences during the trip that were truly unforgettable. So, we thought we’d share some of those special moments with you.

Once we all gathered in Seattle, we hopped in a SUV and began our trek up to the Olympic Peninsula. Since we had a little flexibility in our schedule, we decided to the take the slightly-longer, but more scenic route by ferry over to the peninsula. This was a great opportunity to catch up, share crazy stories, eat the kind of junk food you only eat on road trips, take lots of selfies, gawk at the beautiful scenery and belt out our favorite songs in unison every time they played on the radio. Since the four of us live in three different cities, this was exactly the kind of bonding time we needed before arriving at the park.

Waking Up, Every Morning, To Lake Crescent

OK, we admit it! This one doesn’t represent a single moment in time, but a series of events that happened every morning. Our rooms were in the Roosevelt cabins which sat about 30 feet from the Lake Crescent shore line. With massive windows facing the lake, as soon as the sun came up, we were treated to a performance of light, reflection and shadow over Lake Crescent. Each morning, a different personality appeared, and we couldn’t wait until the sun came up to see it come to life.

Somewhere Over The Rainbow

Todd Grubler, the General Manager of the Lake Crescent Lodge was a delightful and thoughtful host during our time at Olympic.

One evening, he suggested a power-boat ride out onto Lake Crescent. Of course, we couldn’t resist. As we were pulling away from the dock, a storm rolled over the mountains and a burst of rain kicked in. We were so excited about the ride that we decided to tighten our rain jackets and endure the weather, instead of turning back to shore.

This was one of the best decisions we could’ve ever made. Little did we know, that the rain would only last about 10 minutes. And, when the sun burst through the clouds, the most vivid, full-arc rainbow we’ve ever seen emerged.

The longer we stayed on the lake, the bigger and more colorful it became. Then, a second rainbow began to form above the first. What a special experience that was. Nature was showing off for us. And, we secretly wondered what kind of connections Todd had, that he could order up such a stunning display for us, while we were on the water.

Group Hug With A Park Ranger

In an earlier post, we discussed how special and inspiring the Olympic park rangers are, and how much we bonded with Ranger Jon Preston in particular. But, there was one moment in particular — when he shared how special the Hoh Rain Forest was to him personally — that struck a chord with all the Travelistas in Nature. It was then that we understood the personal, generational, and transformative power of nature. Tears ensued and before we knew it, we were tangled up in a group hug. We’ll never forget that experience and we’re pretty sure Ranger Jon won’t either.

The week before we started our expedition at Olympic National Park, we all checked the Washington State weather reports obsessively. The closer the trip got, the worse it looked. Rain, rain and more rain. Needless to say, we were a little worried that we’d be floating down the hiking paths. We hit the jackpot in a big way. Nice water-wicking and fast-drying gear helped (Thanks Columbia and REI!), but really, it wasn’t so bad being wet. Playing along the beach in the rain seemed perfect. And, the misty, foggy air brought an air of mystique to the coastline that we would have missed in different conditions.

After we returned from the beach hike, it continued to rain for the rest of the evening. Our last stop, before heading back to the lodge to pack, was a visit to the Sol Duc Hot Springs.

We stripped off the hiking gear and jumped into our bathing suits. Since the air was brisk, we quickly jumped into one of the warmest pools there, averaging 105 degrees and soaked in the sulfur, silica and sodium rich waters. Then, it started to pour down raining. There was no need to leave, since we were already wet.

I have to admit, it felt a little odd — but quite exhilarating — to have ice cold rain drops pounding on my head and neck, while the rest of me was submersed in hot, steamy water. Duncan Allinson, the general manager of the Sol Duc Lodge, said that it’s even more fun to sit in the springs when it’s snowing outside. Hmmm, we might have to find our way back there when it’s cold outside, just to experience it first-hand.

These special moments during #ALEx13 planted a seed for us. We’re already thinking about the next time we can travel together as Travelistas in Nature, better yet, as hermanas.