A Fifth World Conference of Women: game changer for peace 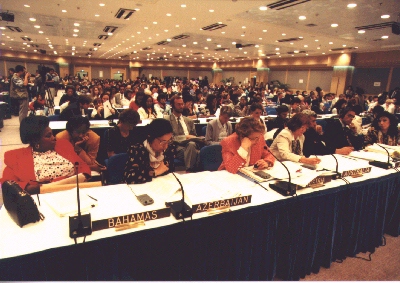 Thousands of women gathering to make the world a better place ― you got a problem with that? You might think some people do if you look at the timeline for the UN-sponsored World Conferences on Women: 1975 (Mexico), 1980 (Copenhagen), 1985 (Nairobi) . . . 1995 (Beijing) . . . and then?? No wonder the crescendo is swelling for a 2015 conference, 5WCW to its friends. Be one! Our founder Patricia Smith Melton explains why and how.

The reasons for a Fifth World Conference of Women (5WCW) on the twentieth anniversary of the Beijing conference are many. Primary is that peace — global, regional, and local — requires women front, center, and at its core. It is women who create peace on the ground. Women are also needed at the tables of negotiation and to implement peace accords. Women’s knowledge, tenacity, ways of doing things, creativity, and flexibility are required to reach sustainable agreements between conflicted parties and to make the substantive changes that benefit everyone. 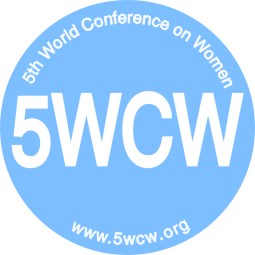 On International Women’s Day, March 8, the President of the United Nations General Assembly H.E. Mr. Nassir Abdulaziz Al-Nasser and the Secretary-General H.E. Mr. Ban Ki-moon jointly proposed convening a Fifth World Conference. Their announcement said it is “high time that a world conference is convened, more so because the world is going through enormous changes on all fronts having both positive and other implications for women.”

The next step to make 5WCW real is for a Member State, or cluster of Member States, of the UN to propose the conference for consideration and vote by the other members. As of this writing that step has not happened, though many nations’ representatives are in discussions about it.

Now I’m going to bring you — and I mean YOU — into the process of creating the next 5WCW.

To be clear, some UN States, primarily Western, have concern that convening a conference could open a way for fundamentalist interest groups to undermine the gains made for women’s rights in Beijing. But when has fundamentalism been “contained” by non-fundamentalists freezing in place? This doesn’t make sense. And doesn’t this concern reflect an outmoded lack of trust in women’s ability to decide and fight for policy based on our own best good?

Rather than step back, leaders need to step forth to embrace the vision that has truth and impact, that women gathered from every nation will, of course, do what women do best — make connections, learn and share best practices for healing and development, bond across cultures, organize to support movements for positive good, and find solutions to problems. The women leaders of the developing nations particularly need this conference so they can network and spread the best practices they gain throughout their home countries.

As a leader, you can step forth to insure the creation of 5WCW. Join Jean Shinoda Bolen and the core of women — and Ambassador Anwarul Chowdhury, “father of UN Resolution #1325 on Women, Peace, and Security”— whose vision and tenacity are making 5WCW real.

Your action points include:

1) Participate in the Global Call to Prayer for a 5WCW on Earth Day, April 22. Take a moment for prayer, meditation, or visualization of a 5WCW. Bring your intent to helping decision-makers recognize that a global women’s agenda supports the earth and to inspiring UN Member States to act on behalf of women and girls by introducing a resolution for the 5WCW before the 66th session ends in September 2012.

2) Participate in the email campaign to thank Mr. Al-Nasser and Ban Ki-moon for their joint proposal on March 8. Praise them for their initiative and leadership and encourage them to continue their support, knowing there is a groundswell of support for 5WCW. Email addresses: President of the General Assembly H.E. Nassir Abdulaziz Al-Nasser at al-nassern@un.org and Secretary General Ban Ki-moon at bkm@un.org. CC please to Executive Director of UN Women Michelle Bachelet at bachelet@un.org, Jean Bolen at jeanbolen@gmail.com, and me, patricia@peacexpeace.org. For more information go to www.5wcw.org, where your organization can add their name to the petition officially supporting 5WCW.

3) Forward and post this commentary to your friends and social networks asking them to step forward with you. Add your own passionate appeal.

The power of women is rising throughout the world and, combined with the power of the Internet, the 5WCW will be a game-changer for peace, the tipping point where in the future people will look back and say, “That was when women changed the world.”

featured
Previous Post Viva La Familia! An update on one family separated by U.S. immigration policies
Next PostCurandero: Meditation connects the body, mind and soul to create the life we want

Viva La Familia! An update on one family separated by U.S. immigration policies
Comment
Curandero: Meditation connects the body, mind and soul to create the life we want