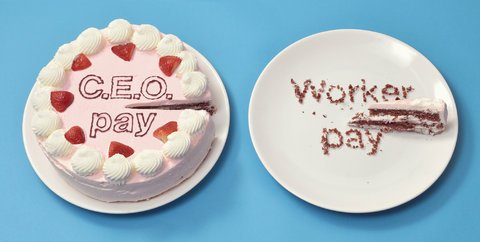 Big Business fought hard to kill a new regulation requiring corporations to disclose the gap between their CEO and median worker pay. For eight years after the regulation became law, corporate lobby groups fought to repeal, gut, or at least delay it.

But thanks to an outpouring of support by elected officials, investors, and ordinary Americans, the pay gap rule survived. And now, finally, the public is getting the information they need to see which corporations share the wealth with their employees — and which do not.

The staff of Rep. Keith Ellison has just released a report looking at the first 225 companies in the Fortune 500 to disclose their pay gaps. The average CEO-to-worker pay ratio among these firms was 339 to 1, and the widest gap was toymaker Mattel’s, at an astounding 4,987 to 1.

Ellison has long been the lead champion of the pay ratio regulation in the U.S. House of Representatives. Between 2013 and 2017, the Minnesota Democrat spearheaded four letters on this issue signed by dozens of other members of Congress to the Securities and Exchange Commission. Democratic Senators fired off similar missives, demanding that the rule be put into force. 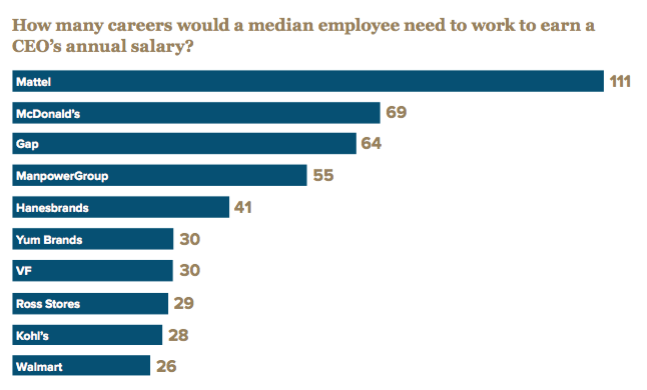 Based on a “career” of 45 years. Source: “Rewarding or Hoarding? An Examination of Pay Ratios Revealed by Dodd-Frank,” a report prepared by the staff of Rep. Keith Ellison.

It’s outrageous that so much effort had to be invested just to get regulators to do their jobs. After all, CEO pay ratio disclosure became the law of the land in 2010 as part of the Dodd-Frank financial reform. And when the SEC invited public comment on the regulation, hundreds of thousands of people sent supportive letters, arguing that the extreme pay gaps at most large U.S. corporations are both bad for business and a key driver of rising inequality.

In 2015, a Democratic-majority SEC finally voted to approve the regulation, with the first numbers due to be reported in 2018. But in January 2017, President Donald Trump named Michael Piwowar, a passionate protector of overpaid CEOs, Acting SEC Chair. Within two weeks, Piwowar launched a renewed effort to block the regulation, instructing his staff to “reconsider implementation.”

Ellison and other Democrats, along with responsible investors and economic justice advocates, mobilized once again to defend the rule — and won. With his crusade thwarted and the pay ratio data now streaming in, Piwowar has just announced he’ll step down by July 7, even if his replacement has not been confirmed.

Of course, corporate executives continue to complain about having to reveal their pay gaps. The Ellison report highlights a choice quote from Public Storage CEO Ronald Havner, who maintains that comparing his work to that of a median employee is “not even apples and oranges. It’s more like fruit compared to Star Wars.”

In 2017, the size of Havner’s paycheck was indeed in another galaxy, far, far away. Half his 5,519 employees made less than $23,921, which is below the official U.S. poverty rate for a family of four. Havner made 439 times that amount, with total compensation of $10.5 million.

Rep. Ellison is exploring ways to build on pay ratio disclosure by using tax, contracting, and subsidies polices to encourage companies to narrow their gaps. The report notes, for example, that federal contracting reform to encourage companies to narrow their gaps could likely be done without Congressional approval. The federal government, they point out, already denies contracts to companies that contribute to racial and gender inequality through discrimination in their hiring and employment practices.

In a press statement, Ellison blasted the vast majority of companies in his staff’s survey that pay their CEO more in a single year than their median worker would make in an entire 45-year career.

“This immense inequality is a crisis for our economy and our democracy,” the Congressman said. “We need legislative action at the local, state and federal level to address it.”

Sarah Anderson directs the Global Economy Project at the Institute for Policy Studies and co-edits Inequality.org. Follow her at @Anderson_IPS