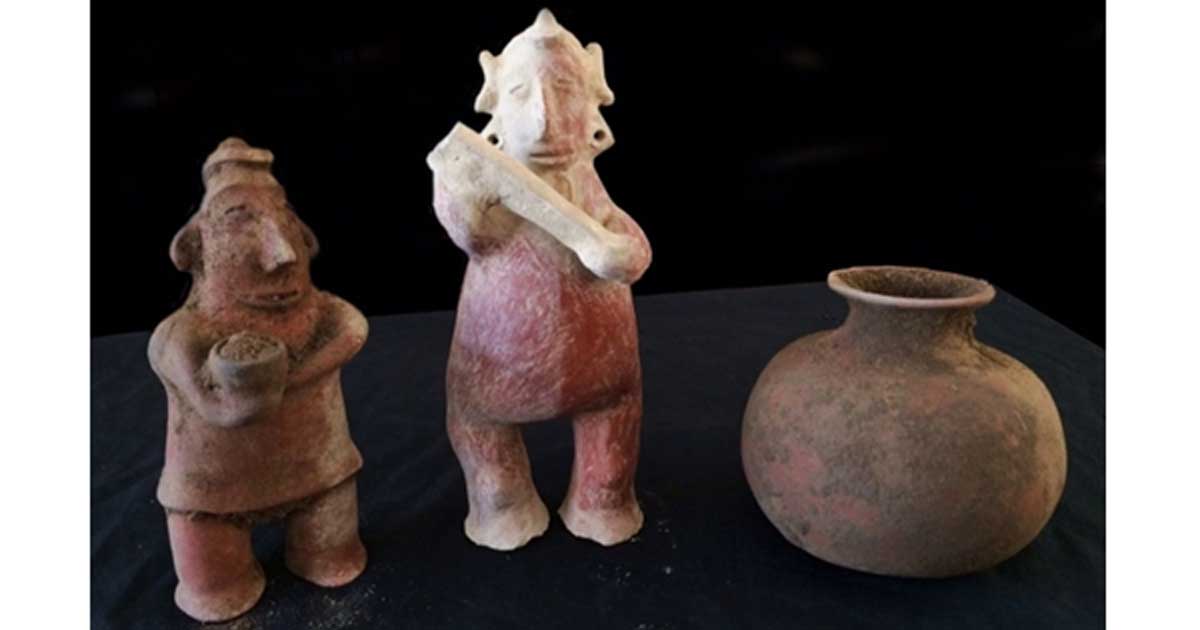 Archaeologists have unearthed a 1,700-year-old intact tomb in Mexico where they found the skulls and other bones of twelve male adults, as well as pre-Columbian figurines and statues.  Each of the figures was sculpted from fine paste that was polished when complete. One of the figurines was wearing an elaborate headdress with a horn.

According to the archaeologists that made the discovery, the 1,700-year-old untouched tomb dates to the Comala Period (between 0 and 500 AD), and was unearthed during work to reshape a Seventh-day Adventist church in Colima, Mexico. The archaeologists revealed a hole that was circumscribed with stones, artifacts for grinding, and human bones. Inside the hole, the surprised researchers found 12 skulls and other bones that were piled atop one another in an obviously disorganized manner. According to Rosa María Flores Ramírez, a physical anthropologist at the National Institute of Anthropology and History (INAH) in Mexico, some of the skulls showed signs of damage, as well as tooth fractures and wear. Digging deeper and exploring further, the archeologists discovered three burial levels. In the second burial level, the team found a male and a female figurines, placed facedown next to two skulls. A tomb was recently uncovered in Colima, Mexico that held bones and ancient figurines that dated to 1,700 years ago. Credit: Rafael Platas/INAH

Art of the Figurines

The male figurine holds an ax in one of his hands and measures 15 inches (39 centimeters) tall and 6 inches (15 cm) wide. He’s wearing an elaborate headdress with a horn jutting out from it. The female figurine is shorter and leaner than the male, has a sharp nose and a triangular head while her measurements are about 12.5 inches by 5.5 inches (32 by 14 centimeters). She wears a banded headdress and has her hands crossed, with the right hand holding a pot. What’s even more interesting, both figures were sculpted from fine paste that was polished once the sculptor was done with the designing.  Rafael Platas Ruíz, an archaeologist at the INAH, tries to explain the role of the figurines in a translated statement from Inah as Live Science reports, “The presence of these pieces in the offering hint at the worldview of the groups that inhabited the Colima valley in that period. The sculptures, according to their attributes, served as propitiatory elements that ensured the protection of the deceased, as is the case with the male sculpture, which represents a shaman. The other objects fulfilled the function of bringing the requirements to the underworld.” The Finding is Considered Very Rare

The finding is considered to be unique because these types of tombs are almost always looted before archaeologists and other experts spot them. The archaeologists, obviously satisfied with what they discovered said in a statement as Live Science reports, “The fact that the tomb was untouched allowed us to have a first approach with the bone remains, to observe the lesions, deformations and to have more information to know what was their way of life.”  Ultimately, the researchers – even though they hesitate to make any conclusions yet – speculate that is possible this not being the only burial in the area, because the entire Colima valley was occupied continuously for nearly three thousand years (from 1500 BC to 1500 AD). Some of them are optimistic and confident that more cultural relics from different periods in the city’s history are probably lying beneath it, waiting to be unearthed.

Featured image: During the remodeling work of the church Seventh-day Adventist, in the center of the city of Colima, Mexico,  figurines were discovered in an unearthed tomb where bone remains of at least 12 individuals, who could represent a small window to what was a great pre-Hispanic pantheon of the Comala phase (0-500 AD), were found by specialists of the National Institute of Anthropology and History. Credit: INAH.