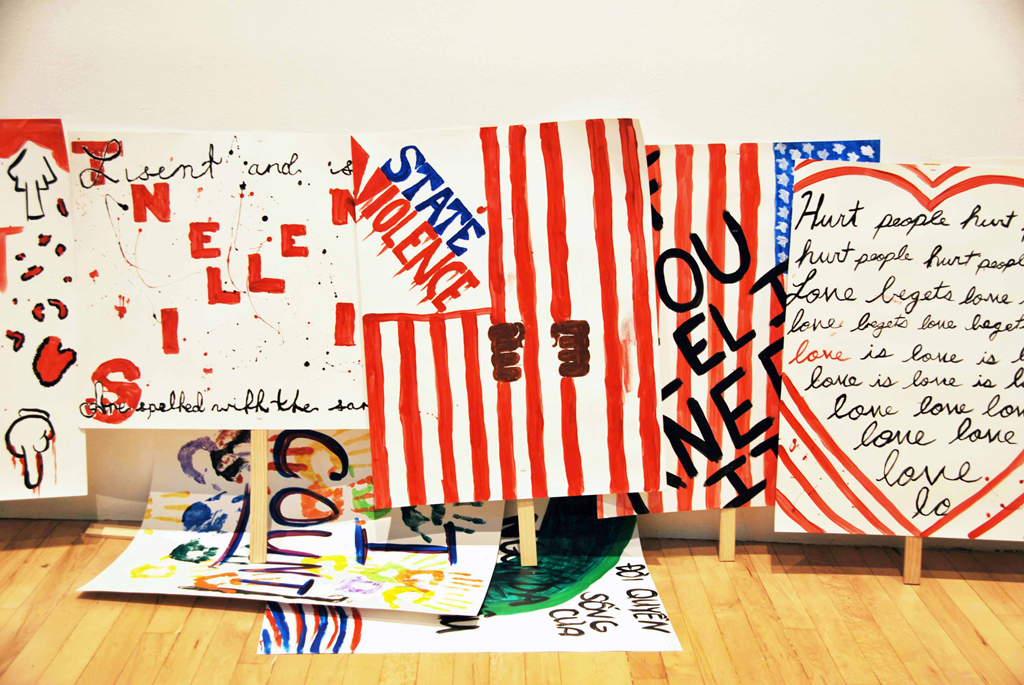 LOS ANGELES — For Jordan, growing up in Jamaica, Queens in New York City left much to be desired. One of the few places he could go after school were the youth arts programs in his neighborhood.

“It was the thing to do after school instead of being outside or doing something that could possibly get you in trouble,” he said.

One of the programs Jordan was in is Neighborhood Opportunity Networks, or NeON Arts. It’s part of New York City’s Department of Probation and is managed by Carnegie Hall’s Weill Music Institute.

He was in Los Angeles as part of the Create Justice forum led by Weill and Los Angeles-based Arts for Incarcerated Youth Network (AIYN). The initiative brought together youth leaders from around the country to share their vision for the nation’s juvenile justice system.

Programs such as those driven by the Weill Music Institute are providing space for young people to engage in the arts in a way that they may not have had otherwise.

“Because music is inherently expressive, when you invite young people in to participate in musically, and in other art forms as well, we hear stories and we hear voices that we may not have heard otherwise, or we hear them in ways that we can take in differently,” said Sarah Johnson, director of the Music Institute.

Space for young people to engage in the arts is an essential part of discussions on juvenile justice happening across the country.

Youth leader Brian speaks out about his experience with the juvenile justice system to a crowd of adult advocates.

“The arts are uniquely good at creating a safe space and creating space for inclusion,” said Kaile Shilling, AIYN executive director. “A lot of the systems that young people butt up against are set up to be exclusionary, they’re set up to shut them out, make them abide by rules, and the arts gives young people, all people, really, a space to express themselves freely.”

The Create Justice event took place at the newly opened Campus Kilpatrick youth detention facility and the Armory Center for the Arts in Pasadena, California, on Sept. 25 and 26.

Campus Kilpatrick in Malibu, California is part of a recent initiative called the LA Model that aims to overhaul the juvenile justice system in Los Angeles County, which has one of the highest youth confinement populations in the state.

“It is a big shift in LA County probation from a custodial, correctional model to a restorative and supportive model and really seeing themselves as a continuum of care for young people,” Shilling said.

The LA Model is an initiative spawned from the Missouri Model, which focuses on rehabilitation and positive reinforcement to reduce recidivism rates. According to Shilling, what sets the LA Model apart is its focus on the arts.

“Arts should be a real partner in how we are thinking about transforming and supporting young people, not just a program coming in and out,” she said. “One of the things that’s really unique about the Kilpatrick Model, the LA Model, that they’re using here is a real commitment to integrating arts in the facility.”

Youth leaders draft protest signs based on their experience of the juvenile justice system.

The California Arts Council’s JUMP StArt grant program started in 2013 to support arts education programs for youth who have spent time in the juvenile justice system. Meant to be an intervention in the school-to-prison pipeline, it requires grant recipients to demonstrate a direct collaboration between an arts organization and juvenile justice program.

One such grant recipient is Street Poets Inc., a nonprofit organization in Los Angeles that uses poetry to build community and to heal at-risk youth and those who have been exposed to the juvenile justice system. Arts-based programs like Street Poets have been instrumental in changing the environment of juvenile justice facilities to foster healing.

“This practice empowers our youth to reclaim conscious control of their own stories, shifting them from the shadows where their stories may have previously controlled them,” Chris Henrikson, founder and executive director of Street Poets, said in an email.

Other youth leaders at the Create Justice initiative agreed.

Brian works with youth newly released from the juvenile justice system to give them support and help them find jobs.

Youth leaders of the Create Justice initiative gather to create art that represents the initiative’s aim to build a collective conscience of justice.

The ability of the arts to help young people gain job skills is paramount to the healing process for those who have been in the juvenile justice system. It helps young people see a future for themselves beyond facility walls by giving them job skills in creative careers.

Shilling agrees the arts are important in helping young people find jobs once they leave the juvenile justice system. She notes that one in every six jobs in Los Angeles is in the creative economy.

The support of this arts-focused model has been instrumental helping arts programs expand their outreach. As a result of collaborations with AIYN, and grantee of JUMP StArts’ statewide and regional networks program, Street Poets has been able to build its programming to reach multiple levels of the juvenile justice system.

“We have expanded dramatically our outreach in the LA Youth Probation campus – going from three probation sites once a week to close to as much as nine to 10 twice weekly,” Henrikson said. “We’ve also started training probation officers in our methodology and have led four trainings for approximately 300 probation officers over the past two years.”

Awareness surrounding the effectiveness of the arts in healing young people and reducing recidivism rates has not gone unnoticed.

“This year, the legislature included a line-item provision of $750,000 in the Senate Budget Act to expand the JUMP StArts program. That financial infusion clearly speaks to their belief in its value,” said Josy Miller, arts education program specialist of JUMP StArts.

Conversations about how the arts can heal young people who have been in the juvenile justice system continue to be at the forefront of the nationwide awareness of the ways institutions are failing young people, and how leaders can go about changing these systems.

“There’s a very, very, real struggle around how do we improve systems for young people and how do we really questions those systems in the first place,” Shilling said. “The arts are actually central and foundational to struggling with really hard, complex issues.”

Featured Photo: Youth leaders at the Create Justice initiative make protest signs to illustrate their views of the criminal justice system on Sept. 25.