At Arizona School, Latino Parents Learn English From Other Parents

At one Arizona elementary school, parents are participating in a dual-language program of sorts.

Language differences can be a barrier from immigrant Hispanic parents feeling welcome at their children’s schools. But Fox News Latino reports that at Navajo Elementary School in Arizona, Spanish and English-speaking parents are meeting up for several hours a week to learn each others’ respective languages. 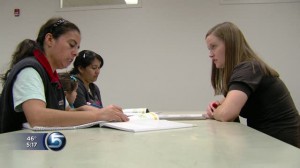 The school is located in Scottsdale, and about one-third of the students are Hispanic, and half are white. Despite being located in the wealthy city, the particular campus itself is a Title 1 school, where many children qualify for free lunches.

Parent Teacher Organization member Anna Lawrence came up with the idea, after becoming concerned that the Spanish-speaking parents did not feel comfortable at the school and it was discouraging them from being more involved. The parents are learning with the help of the program babbel.com.

Parent Sarah Birkett told Fox that the program has drawn her closer, with her even visiting another family’s home to learn how to make tortillas.

The program says “hey, you’re safe here, we’re all working together,” she said.

This program is interesting, because from what I’ve seen schools often have separate meetings depending on parents’ languages. This program operates more like two-way dual language programs that children participate in–learning each others’ languages in part from each other.

Have you seen any similar grassroots efforts bringing immigrant and American parents closer in your area?