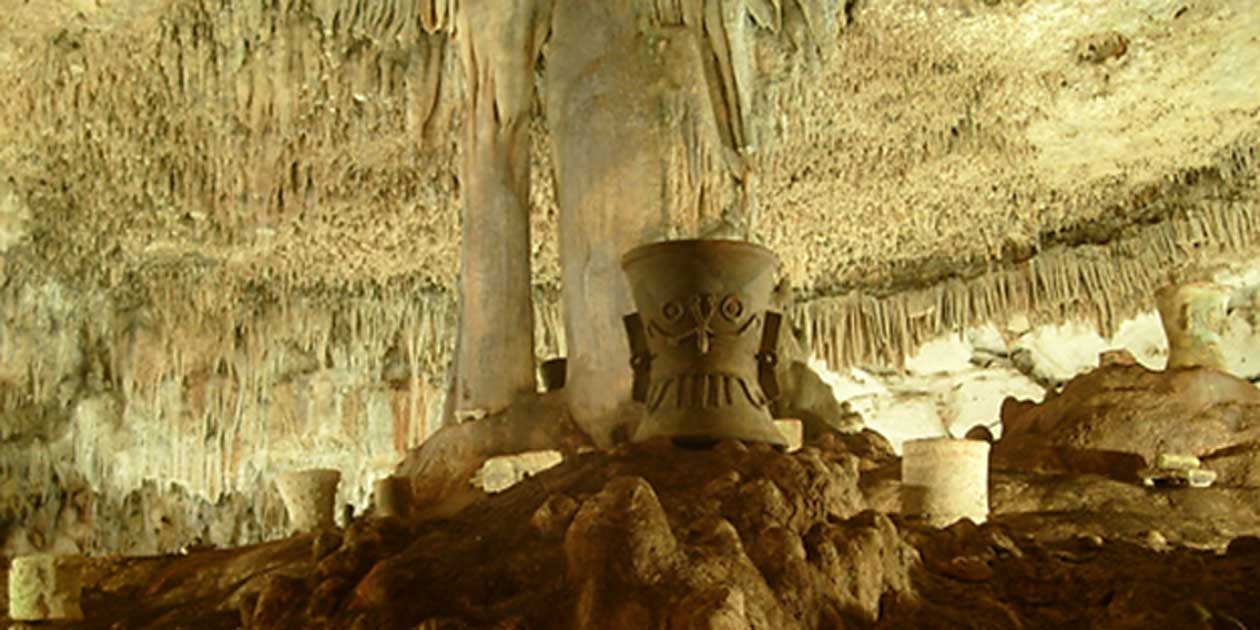 Balankanché (which means the ‘Throne of the Sacred Jaguar’) Cavern is a network of caves located in Mexico’s Yucatan Peninsula. This cave network is situated near the famous site of Chichén Itzá, and was used by the Mayan civilization for religious ceremonies. It was re-discovered in modern times during the early 20th century and has subsequently been studied by scholars. Today, Balankanché Cavern is a tourist spot.

The 1905 Re-Discovery of Balankanché Cavern On the Easter of 1905, Thompson, accompanied by another archaeologist, Alfred Tozzer, explored the cavern. Tozzer, who wrote a description of the cavern in a letter sent to his family, observed that the Balankanché Cavern was immense and that pottery sherds could be found covering the floor in many places. Tozzer also speculated that the cave network was used as a sort of refuge by the local population during times of conflict.

It was, however, only during the middle of the 1920s that the Balankanché Cavern began to be further investigated. During this time, the nearby site of Chichén Itzá was being restored by the Carnegie Institution, and it was decided that the cave ought to be studied as well. Therefore, some researchers were sent to the cave to collect pottery fragments and dig test pits. Apart from that, the cave’s natural environment was also studied. Some researchers, for instance, were sent to collect samples of the flora and fauna inhabiting the cave network. These include a youth by the name of E. Wyllys Andrews IV, who arrived at the end of 1933 and worked for six months under Sylvanus Morley. Around the 1950s, the Carnegie Institution returned to the Balankanché Cavern for the last time. The goal of that expedition was to determine the period during which the cave had been occupied. Based on the pottery they obtained from a test pit, it was concluded that the cave was inhabited by human beings for over three millennia, up until the Spanish conquest.

At about the same time as this was being carried out, a local by the name of José Humberto Gómez Rodríguez began his exploration of the Balankanché Cavern. Unlike the researchers of the Carnegie Institution, Humberto was not an academic. Instead, he was a licensed tour guide. In September 1959, Humberto was guiding a couple in the Balankanché Cavern when he unexpectedly stumbled upon a secret wall.

Humberto was curious to know what was hidden behind the wall, and so he began removing the stones until there was a hole large enough for him to crawl through. Beyond the wall were several passageways, which seemed to end in dead-ends. One passageway, however, led Humberto to a cave, where he found a huge stalactite and stalagmite, which had fused into a large column. Humberto realized, as he stepped back, that the column resembled the trunk of the ceiba, the sacred tree of the Mayans. Moreover, the roof of this cave was deeply pitted, and made it look as though there were leaves above the column. This composite 3D laser scan data image shows staircases and artifacts (primarily incense burners carved in the image of the goggle-eyed rain deity Tlaloc) surrounding the great limestone column of Balankanché stretching from floor to ceiling and very much resembling the ancient Maya conception of the World Tree (Wacah Chan). (CyArk/CC BY SA 3.0)

CyArk provides a concise explanation for why the Maya World Tree would be represented in such a place:

“In ancient Maya belief systems, a cave is a sacred place. Caves offer a portal to Xibalba, the Maya underworld, where the spirits of the valiant dead tangle with supernatural beings, and the roots of the great World Tree are found. From here, these roots extend through the earthly realms of the forests up to the celestial heavens of the mountains. Caves are seen as the mouths of the Witz mountain spirits, and water is seen as having its origin deep within them, issuing forth as rain or rivers. The limestone karst landscape of the Yucatan is possessed of a great many caves, and most Maya cities have several which were used as elite temples for ceremonial purposes, mainly those involved in the invocation of water and crop fertility (corn is also seen as having originated in Xibalba).”

In addition to the column, there were a great number of Mayan artifacts on the ground, including incense urns, pots, and ritual metates and manos (grinding stones). This indicated that the area Humberto had founded was a sacred site. Humberto reported his findings, and soon a team of archaeologists were in the Balankanché Cavern to conduct further explorations and to make documentations. Initially, the plan was to leave the artifacts where they were and turn the cave into an underground museum. But today reproductions of the original items may be seen by tourists visiting the site. Incense burners around the tree-like column in the Balankanché Cavern. (CyArk/CC BY SA 3.0)

archeology, Mayan, Mexico, underground
Previous Post Should we put juveniles away for life? Meet the teen who sparked a debate
Next PostGrad student maps out in astonishing detail the 2016 vote

Should we put juveniles away for life? Meet the teen who sparked a debate
Comment
Grad student maps out in astonishing detail the 2016 vote