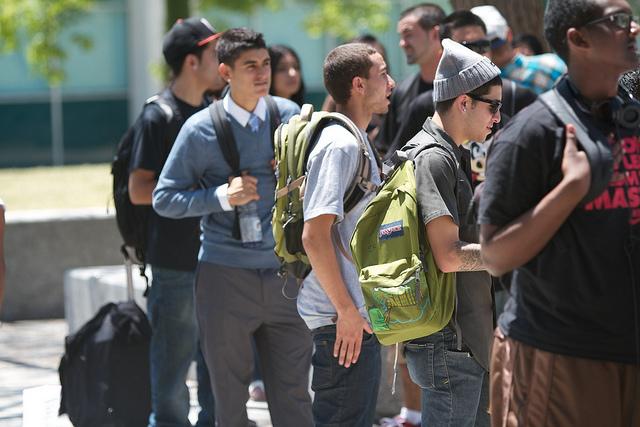 Sixty black and Latino boys spoke to Boston school officials last week about issues they feel might be holding them back at school. Segregation, high suspension rates and teacher diversity were at the top of their list.

Boston Globe reporter Astead Herndon writes that the students’ meeting at school district headquarters on Saturday was the first of a two-day session designed to give male students a voice.

Among the recommendations students gave to officials were pleas to relax discipline at the schools. Having to be escorted to the bathroom by an adult, getting randomly searched by school security guards or walking through metal detectors at the school doors make them feel like criminals, they said.

Boston schools superintendent Tommy Chang, who will oversee an advisory council comprised of some of the minority students at the meeting, called for expanded access to Advanced Work Class, a program in Boston Public Schools which allows young students to test into an accelerated curriculum for grades 4, 5 and 6. According to Herndon’s story, there are few black and Latino boys enrolled.

“This is segregation we’re doing at a very young age. Shouldn’t there be rigor for all fourth-through sixth-grade students?” Chang said.

Boston isn’t the only Massachusetts city grappling with these types of issues.

A recent report by the Urban League of Eastern Massachusetts and the Massachusetts Budget and Policy Center shows that across the state, black and Latino students disproportionately attend high-poverty school districts. During the 2013-14 school year, 69 percent of Latinos attended school at campuses where at least 60 percent of the students were low-income. The same was true for 63 percent of black students.

High-poverty schools across the nation – and in Massachusetts, the report points out – tend to have less experienced teachers, inadequate facilities and curriculums that are not as rigorous as what’s taught in more affluent schools. As a result, test scores and graduation rates suffer.

Rosann Tung has researched Boston public schools at Annenberg Institute for School Reform and presented her findings to the group of black and Latino students assembled last weekend. Warning them the data would make them mad, she reported that just 22.1 percent of black males and 24.9 percent of Latino males in the district’s elementary schools scored proficient or higher on the state’s English exam. For their white and Asian peers, the numbers were much higher at 56.9 and 48.5 percent, respectively, Herndon writes.

A series of reports by the Center for Collaborative Education earlier this year identified a wide achievement gap between black and Latino male students — who make up 40 percent of district enrollment — and their white and Asian peers in Boston Public Schools. Researchers found a lack of cultural competency in the district may have something to do with it. Read more about that here.