Boots that range from tribal to eccentric

Mexican cowboy boots are exotic, eccentric and ultimately can be very strange. To wear them, one needs not only a pair of tight-fitting jeans, a belt that matches the color of the sophisticated footwear and a hat with many Xs to indicate quality, but a lot of personality and an easy-going attitude that says: “Here’s the king of the party.” 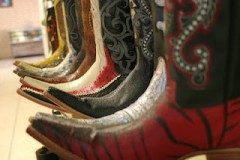 The latest trend is the so-called tribal boots, says Guadalupe Mendoza, saleswoman in a shop in Plaza Santa Cecilia that specializes in these unusual items. “These boots are custom-made,” she said. “They are very expensive because they are not mass produced. It is an artisan’s work.” By expensive Mendoza means price tags that can top $5,000, depending on the length of the tip and the material used.

“This is something else: Now there are boots made from the skin of sea eels,” Mendoza said. “The classic ones are made from ostrich and cow skin.”

Mexican boots are very different from those worn by an American from the Midwest. Details, such as a lower heel, are minor. The main difference is that they have been created to be displayed, so that the cowboy wearing them will be seen and admired by others. That explains the unusual materials and the exorbitant prices. 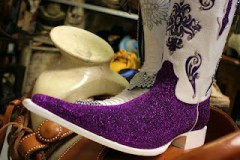 Famous brands such as Louis Vuitton and Gucci stand out in the stores’ stock. “We have a lot. There are some with lights, gems and sequins,” said Mendoza. “When there is an important dance, that’s when we sell the most.”

The emergence of tribal boots

These pointy boots have arisen as part of a musical trend called “tribal guarachero,” which is very popular in the northern Mexican state of San Luis Potosí, explained Pedro Luis Salinas, a frequent visitor to the store where Mendoza works. “The dance is a combination of sounds with cumbia,” he said. “But it has an electronic touch.”

According to Esteban Cárdenas, who created a story and a nine-minute documentary for Vice magazine entitled “The pointy boots of Matehuala,” such boots “are part of the many fashions that exist around the tribal guarachero, a type of music popular among the younger, cross-border generations and which came about from the combination of the tribal, the Colombian cumbia, and pre-Hispanic ingredients such as chants and flutes.”

He says that “for some reason that nobody understands, the cowboys in Matehuala adopted that music; dance competitions are organized so that participants can devote time to create the choreography and to make the boots whose tips sometimes are more than two meters long.”

The boots as well as the rest of the outfit identify us and they stand out as a sort of social and cultural symbol. Use of certain accessories, however extravagant they might be, is a way to display our heritage with pride.

The person responsible for the music that leads to dancing with these famous sharp-pointed boots is Erick Rincón, a young Mexican who for the past two years has been in charge of mixing pre-Hispanic and African sounds with the typical Colombian cumbia.

In the documentary developed by Cardenas, the DJ says that the first time he saw Mexican cowboys dancing with those unmistakable boots was at a rodeo in Dallas, Texas.

Previous Post Video: A Texas town's hard lesson that immigrant detention facilities were not the ticket to boon economics
Next PostUniversity professors share their classes in new online initiative in the spirit that learning is free

Video: A Texas town's hard lesson that immigrant detention facilities were not the ticket to boon economics
1 Comment
University professors share their classes in new online initiative in the spirit that learning is free