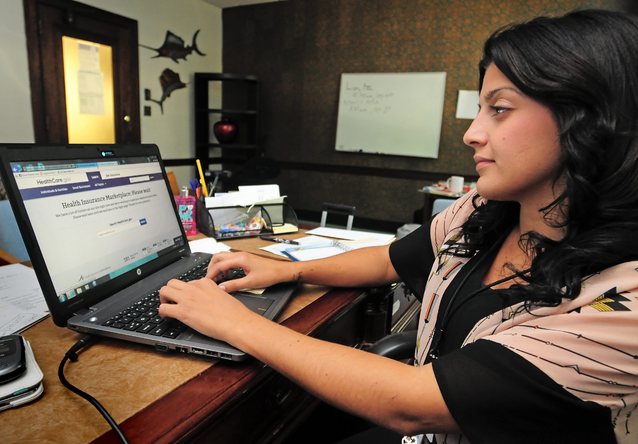 In the past few weeks, the attention of the American people has been trained on Healthcare.gov, the federal health insurance enrollment website, which is experiencing a number of technical problems. The website glitches do present a barrier to the uninsured and underinsured who are making efforts to participate at this point in the enrollment period.

Forty-six percent of those polled in an October Pew Research Center survey said the online health insurance exchanges were not working well. However, an even steeper barrier could prevent minority and low-income persons from signing up at all – limited to no access to broadband Internet.

The Affordable Care Act, signed into law in 2010, is expected to do quite a bit of the legwork involved in equalizing access to quality healthcare.

The Obama Administration created the ACA to respond to some of the challenges many Americans face when seeking health coverage, as well as to reduce both health costs and preventable deaths. Enrollment opened this October and is expected to run through March 31, 2014.

What is the Solution for Health Insurance Shopping Without Internet Access?

The recommended solution for consumers who encounter Healthcare.gov technical issues could theoretically apply to those who lack access to broadband as well: enroll in person, by phone, or by mail. But in the past, access to healthcare and health information has proven difficult for minority, low-income, rural, and otherwise vulnerable communities.

The latest National Healthcare Disparities and National Healthcare Quality reports, released by the Agency of Healthcare Research and Quality (AHRQ), indicated that access to healthcare did not improve for most racial and ethnic groups in the years 2002 through 2009, before the enactment of the Affordable Care Act.

With healthcare providers increasingly implementing telemedicine services, it is increasingly apparent that broadband technology may be the key component for a better quality of healthcare for every American.

It is also clear that mail and phone access are not enough to bridge the gaps in healthcare access and information. As the kinks are worked out of the health website’s code, the broadband technology and information gap must be narrowed to meet the needs of those who stand to benefit the most from shopping on Healthcare.gov.

Engaging the Uninsured for Enrollment

The American government publicized its goal to have seven million uninsured and underinsured Americans sign up in this first year of the enacted Affordable Care Act. The U.S. Health and Human Services Advisory Committee on Minority Health has acknowledged it is still working to identify how to reach these seven million people.

This is evident from the Wall Street Journal progress report as of Monday, November 11, 2013 – fewer than 50,000 people have successfully purchased private health plans in the marketplace linked to Healthcare.gov.

From the vantage point of the broadband technology and information gap, connecting with the uninsured is closely related to how the people seek to connect themselves; that is, how have they accessed health information and resources in the past?

It is also telling to gauge how many are even aware of the requirements of the individual mandate or aware of whether their state has authorized a state-specific health enrollment plan. More than half of low-income and uninsured Americans say they do not understand how the Affordable Care Act will impact them, according to a Kaiser Family Foundation poll.

Twenty percent of Americans, however, have neither a home broadband connection nor a smartphone. Home broadband adoption continues to be closely associated with education, age, and household income. Only 37 percent of adults who have not completed high school have broadband at home, while nine out of ten college graduates have high-speed access.

If Not the Internet, Do It on Foot

Broadband access issues will continue to play an important role in health insurance enrollment, enveloping the technical glitches of Healthcare.gov and the political backlash surrounding the “keep your plan” assurance and its implementation. The results of October 2013 enrollment most likely reflected this. Although October was not particularly vital as an enrollment month, especially for “young invincibles,” young people who do not think they are in need of coverage, it was an early shopping month for those who are sick and were otherwise motivated to obtain coverage.

Beyond October, the concern is that if Healthcare.gov remains bogged down with technical difficulties, an increasing number of young invincibles and groups vulnerable to difficulties such as broadband access will be discouraged from joining. Without the young invincibles to subsidize older, sicker enrollees, the enrollment in the thirty-six states that are participating in the federal exchange may resemble small, high-risk insurance pools of predominantly sick patients, causing premiums to soar in 2015, and distorting the affordability of the ACA.

To increase access to the 20 percent who do not have high-speed Internet at home or on their phone, and other marginalized groups, the states and various organizations must collaborate and engage each individual regarding what plans are available to them.

For instance, a growing number of Hispanic organizations and businesses, the Champions of Coverage, have volunteered to help uninsured Americans get coverage through the Health Insurance Marketplace, thereby increasing access to healthcare for Latinos and other racial and ethnic minorities.

Amber Robinson is staff counsel at the Minority Media and Telecommunications Council. She graduated from Georgetown University Law Center, where she worked for a semester in the public interest law firm Institute of Public Representation, conducting policy research and writing for media and consumer protection clients.