Researchers at The Civil Rights Project at UCLA released a trio of studies this month showing that while community colleges are the gateway to higher education for most Latinos and blacks in California, few of those students end up transferring to four-year colleges and earning bachelor’s degrees. 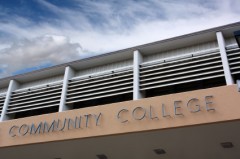 According to the studies, about 75 percent of Hispanic students and two-thirds of black students who pursue a higher education in California choose the community college route. Many of those students needed intense remedial courses when they entered the system.

In 2010, just 20 percent of transfer students from community colleges to four-year universities were Latino or black.

“Either we make bold changes in the system or we consign the majority of our students of color to a life with few prospects and we condemn the state to a future in decline,” said project co-director Patricia Gandara, in a press release.

The researchers also proposed that the strongest community colleges be given authority to award bachelor’s degrees.

According to the press release, among the community colleges that have been successful with minority and low-income students:

“The study finds that a core of personnel in these colleges have lived the experiences of these students and dedicated themselves to the goal of transferring them… To a great extent, these staff rely on the college’s outreach efforts to prepare the students even before they arrive on the campus.”

Community colleges are seen as playing an important role in the educational future of Latinos, given that they’re a more common entry point into higher education than universities. Secretary of Labor Hilda Solis just wrote an op-ed for The Huffington Post calling community colleges the frontlines of higher education in America. She was promoting President Obama’s proposed $8 billion Community College to Career Fund, which among other things promotes job-training programs.

“The first elected office I ever held was as a trustee on the Rio Hondo Community College Board in California. So I know well the value these colleges have for Latinos. In so many ways, they’re a perfect fit. Community colleges are local and flexible. They provide accelerated and translatable degree programs. And they provide training that sets people up for jobs in their community — all at very low costs.”

But by The Civil Rights Project’s assessment, these colleges will need to improve in order to live up to the high expectations. The Los Angeles Times wrote about how the Los Angeles Community College District is trying to address its problems with new programs focused on tutoring and helping students adjust to college.

Even if you don’t live in California, it’s possible for you to examine the transfer rates for community colleges in your state or city.