Can democracy survive without a middle class? 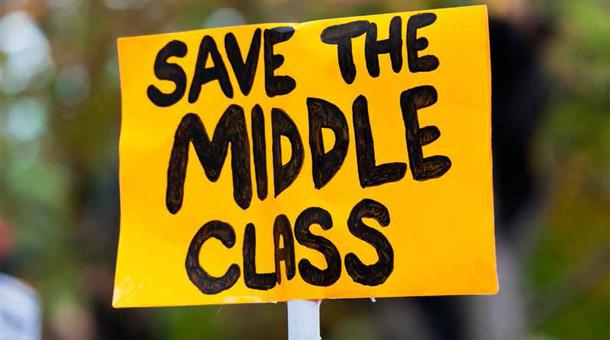 Preserving the middle-class in America is necessary for the United States to continue as a democracy, warns Ganesh Sitaraman.

“The shrinking middle class is a constitutional problem because our Constitution wasn’t designed for a country with significant economic inequality,” says Sitaraman, a law professor at Vanderbilt University and author of a new book, The Crisis of the Middle-Class Constitution: Why Economic Inequality Threatens Our Republic (Penguin Random House, 2017).

The problem of economic inequality is nothing new.

“From the time of the ancients, statesmen and philosophers were deeply worried about the problem of economic inequality,” Sitaraman says. “They worried that either the rich would oppress the poor or the poor would seek to confiscate the wealth of the rich, and the result would be violence, instability, even revolution.”

Throughout history, governments used various methods to create stability, such as having bodies of government representing different economic classes.

But, the United States doesn’t have these features, because the founding era was relatively equal economically. With no feudalism, no hereditary aristocracy, and vast lands to the West, the founders built the Constitution on the basis of relative economic equality. The problem today, Sitaraman argues, is that there is a growing gulf between the affluent and everybody else.

If the United States is to continue as a republic, it will be necessary to revive the middle class. Steps such as raising the minimum age, investing more in education, making voting more convenient, and campaign finance reform would help, he says.

If the issue isn’t addressed, the middle class will continue to shrink and Sitaraman believes the United States will cease to exist as a democracy.

“You’d end up with an oligarchy or revolution and mob rule, and both of those things were not what the founders wanted when they were trying to create a representative democracy in America.”