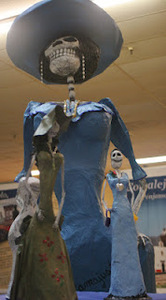 Death can mean pain and sadness, but in Hispanic culture, it can be an event of celebration and family rejoicing. As proof, take the catrinas, those solemn guests who with their pompous dresses, stunning figures and plumage that is the envy of any peacock, they make observers forget that they are seeing an object made of papier-mâché.

“Catrinas are a way of reminding us that we are passing through this life,” said Marina Lozano-García, a papier-mâché teacher and a native of Guanajuato, Mexico, who is in Tulsa leading some workshops. 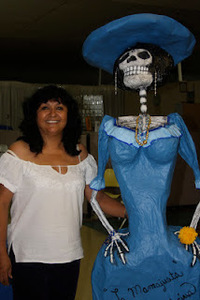 “Paper and cardboard have a special magic,” said Lozano-García. “They turn the present into history. I say that because we use existing elements, inspired in the past and in the hereafter.”

Lozano-García has been doing this paper and cardboard artwork for 36 years, specializing in catrinas and alebrijes, which are figurines that depict imaginary beings.

“With cardboard we can flirt with death by way of the catrinas or give free rein to the imagination with the alebrijes, which are nothing but fantastic animals, sometimes with real parts, but full of Hispanic inventions,” she said. “But the most distinct aspect of this art form is that each papier-mâché teacher has a characteristic hallmark. No mold is the same as any other, and thus no catrina and no alebrije is the same. They are all different, they are all beautiful.”

As she was preparing a mixture of hot water and corn flour into which newspaper would be dipped, to make the frames for the catrinas and alebrijes, Lozano-García delved into history.

“Cartoonist José Guadalupe Posada was the original creator of the catrina by way of a metal engraving, but it was the great muralist Diego Rivera who gave those bones life with his mural, ‘Dream of a Sunday Afternoon in Alameda Park,’” she said. “Besides, Rivera was the one who christened that beautiful creature as a catrina.”

Lozano-García said the history of the alebrijes is different. “They are animals or combinations of fabulous animals, fantastic and with a bit of reality,” she said. “They were invented by Pedro Linares López in the 1930s, perhaps through an agitated delirium. But what a blessing; they are magnificent.”

The purpose of the workshops “is to preserve the magic of cardboard – but more than the piñata,” she said. “We have a culture that is so rich that it crosses borders and dates. It doesn’t have to be Easter or the Day of the Dead or Children’s Day to celebrate with catrinas and alebrijes. That surreal world – magical, mythical – is our Hispanic mark on the planet.”

The teacher then got back to her task: to continue creating stories with papier-mâché, preventing the loss of a folk art used extensively in festivities and ceremonies that decorate our customs and traditions. With cardboard and paper, death becomes life through a syncretism of prayers, spectacle and fun. 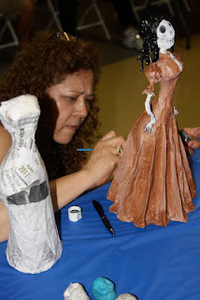 Papier-mâché arose in Mexico in the 18th century via pyrotechnic figures used for religious holidays. However, others have found its roots in the paper crafts from China, which would have arrived on this continent in the 16th century.

Today, teachers still use the techniques and forms of traditional papier-mâché and cardboard. However, changes in how the pieces are used, going from essentially a decorative to a ritual role, have changed the limits and borders of this craft, in which the creators have used their imagination to reinvent old patterns.

Although some traditions have been disappearing little by little, the papier-mâché craftsman still labors within a cycle of production tied to yearly religious holidays. In January for epiphany or Three Kings Day, horses are fashioned. On Saturday during Holy Week, images of Judas appear. In May, parrots and clowns, and in June, the day of St. John, horses, clowns and dolls with moving parts.

September calls for cardboard helmets for Independence Day, and horses, bugles, eagles and Hidalgo, the priest and leader of the Independence movement. For the celebrations honoring the dead, skeletons are made of cardboard and made to dance by pulling a thread. Also created are priests and coffins known as “tumbitas.” In December one sees Nativity scenes and star-shaped piñatas.