Latina Lista: News from the Latinx perspective > Columns & Features > BlogBeat > Chasing Down a Better Way to Run: Learning How and Why We Run

Chasing Down a Better Way to Run: Learning How and Why We Run

This View of Life

Harvard Provost Alan Garber loves running — so much so that when he returned to his alma mater last year, he listed among the job’s perks a chance to resume his exercise route along the Charles River.

“I love seeing Dunster House as I’m approaching the end of my run,” said Garber, who’ll soon be pounding the pavement with nearly 30,000 others in the Boston Marathon on April 16. 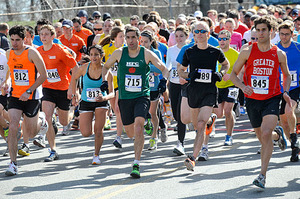 But until recently, Garber described himself as “recidivist runner.” The cause wasn’t a lack of enthusiasm or even of precious time, but an all-too-common phenomenon for regular runners: repeat injury. “I was at the point where injuries were making it questionable whether I’d be able to continue to run,” he said.

Most people know about runner’s high. But for most runners, injury is as much a part of the experience as euphoria. Studies vary widely, but it is estimated that between 30 and 80 percent of regular runners are injured in a given year. Shin splints, runner’s knee, iliotibial band syndrome, plantar fasciitis: For many years, everyone from coaches to biologists to casual joggers has accepted such injuries almost as a necessary evil.

But a growing number of researchers, many of them at Harvard, are convinced it doesn’t have to be that way. What’s more, they say, we often don’t need equipment to solve our many aches and pains. The human body, they argue, is built to run. Thanks to a growing body of scientific research, they’re figuring out exactly how humans were meant to move.

These medical clinicians, biologists, and anthropologists are part of a cohort at Harvard, including several University-affiliated research centers, that may be unique in combining breadth and depth of research on the subject at a single university.