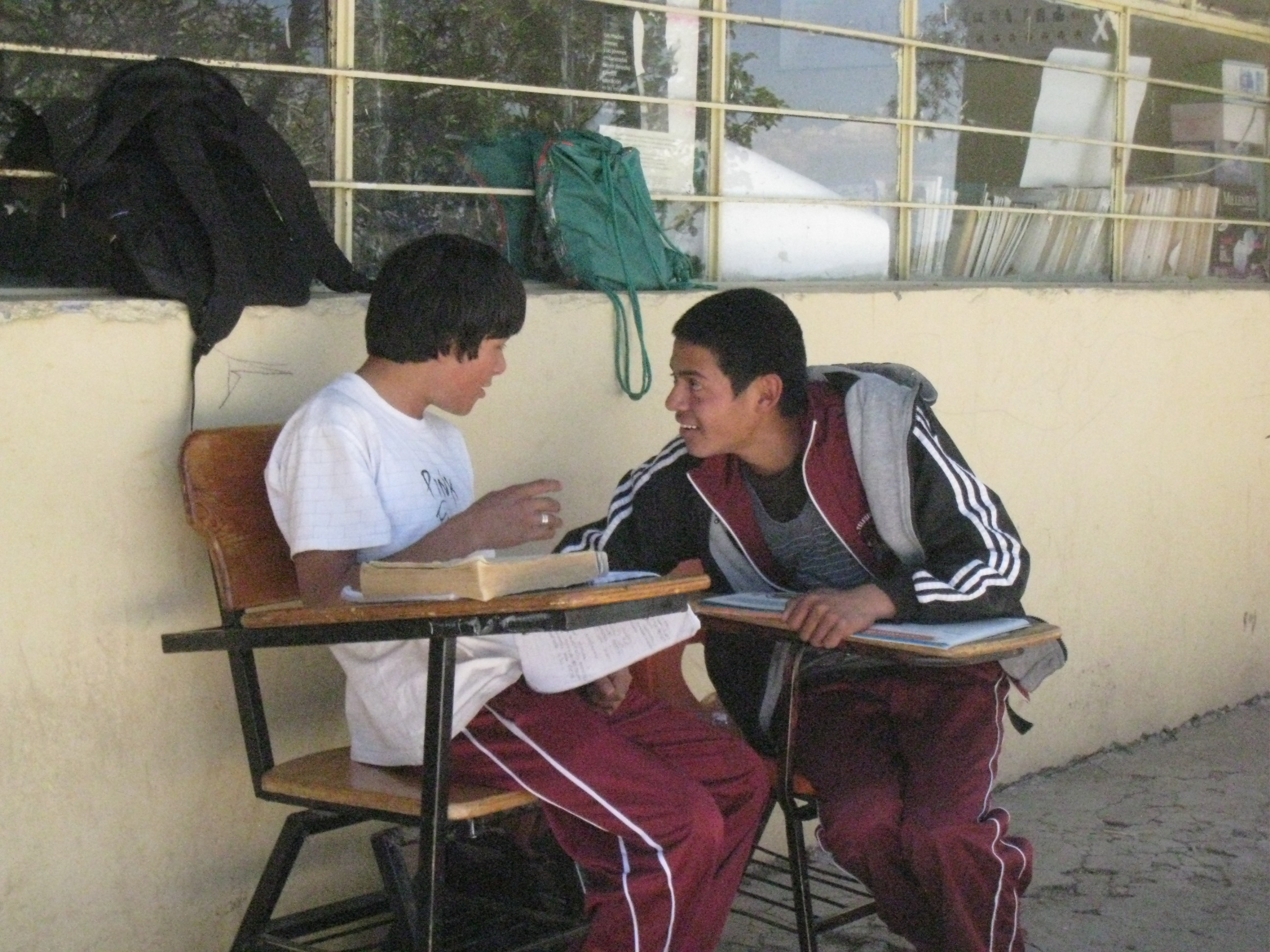 The state of Durango, Mexico, is a study in breathtaking contrasts. On the journey to the county of Mezquital in the southern tip of the state, dramatic desert landscapes give way to the lush, green peaks of the Sierra Madre Occidental mountain range, which nestle a tiny, chilly village named Los Charcos.

As one heads farther southwest in the direction of the Pacific Ocean, the climate becomes warmer and more tropical. In this area lies the village of Huazamota. Despite their disparate weather patterns, Los Charcos and Huazamota have much in common aside from lovely geography. Each boasts a population of fewer than 800 people, most of whom belong to indigenous communities.

There is little to no cell phone or internet access in either village, and the closest city is five hours away. They are also both located in a region with some of the highest levels of poverty in the country. Perhaps most notably, however, both villages are sites of an innovative approach to the challenge of bilingual and multicultural education.

At the heart of this approach is a teaching methodology known as relación tutora. Using this method, a student chooses a topic according to his interests, and the teacher guides the student by Socratic-style questioning to discover the knowledge he already has of the topic.

Using this knowledge as a base, the student learns as much as possible about the topic through self-directed research. Once he has mastered his topic, the student then serves as a tutor to other students — either one on one or in small groups — who wish to learn about it. These classmates then become tutors themselves upon mastering the topic, and the cycle continues.

In an effort to improve educational attainment in its poorest regions, the Durango’s secretary of education, in tandem with the organization Redes de Tutoría, has been working to implement this method in schools like the telesecundarias (distance-education middle schools) of Los Charcos and Huazamota. As part of the Redes de Tutoría team, I had the good fortune of visiting and observing schools in these two villages this past winter.

While in Los Charcos, the first class I observed was one on the subject of silviculture (the study of conserving and caring for forests). I asked various students if they could explain to me the process of relación tutora in their classes, only to be greeted with either silence or awkward giggles.

I assumed that most of these students were probably just shy and skeptical about talking with a foreign visitor. Eventually, one student did offer to help me. It was only then that the teacher explained to me that he was one of the few students in the class who had a good understanding of Spanish. The vast majority of the students belong to the Tepehuan ethnic group and are only fluent in their native language, O’dam.

As one may imagine, this poses a very unique challenge to the school’s teachers, most of whom only speak Spanish. This is where relación tutora comes in.

To manage the bilingual challenge, the teachers will try to ensure that the students with the best handle on Spanish become tutors. Once these students have mastered their topics, they tutor their fellow Tepehuan classmates in the same topics. In many cases, they are tutored in their native language.

However, Spanish grammar practice is integrated into every tutoring session. For example, no matter the subject, students have to create a personal glossary of words that they struggled to understand and search for their definitions in a dictionary. They also have to do a grammatical analysis where they categorize various words from their readings according to their type (verbs, nouns, adjectives, synonyms, antonyms).

In Huazamota, though the language situation is different, similar challenges exist.

In this region, the student population is more ethnically and linguistically diverse. Most students identify as either mestizos who speak Spanish, Tepehuanes like those in Los Charcos, or Huicholes, another indigenous ethnic group with a different language. As is the case in Los Charcos, most of teachers at the telesecundaria in Huazamota speak only Spanish.

To deal with this problem, they use a strategy similar to that of Los Charcos in which Tepehuan tutors are matched with Tepehuan students, Huichol tutors with Huichol students, and so on. However, depending on the demographics of the class and the academic proficiency of the students, this is not always possible, and many of the tutoring groups are multicultural. In either case, student-created glossaries and grammatical analyses are incorporated into every lesson.

This approach has had profound effects on the Spanish proficiency of indigenous students.

According to math teacher Alan Montelongo, “The effect can be seen in their vocabulary, their oral expression… we have mestizo teachers in all our classes, and when they speak to them in Spanish, it’s like a foreign world for these students. But now with relación tutora, the learning process for these students has changed. Relación tutora utilizes dictionaries, bibliographies, glossaries, and so the indigenous students know more Spanish words and write much better in the language.”

Observing these schools made me question some of my own assumptions regarding foreign-language education. As a former ESL instructor, I taught my classes in accordance with the idea that the best way for students to improve in a new language is to use the students’ native languages as little as possible to achieve true immersion.

However, while this may be appropriate in certain circumstances, there is plenty of evidence that bilingual education, which uses a student’s native language as a basis for teaching the second language, has a multitude of benefits, especially for lower-level language learners.

Far from impeding second-language-acquisition skills, proper instruction in one’s native language may improve these skills to a far greater degree than a monolingual immersion approach would. This holds true even when the languages share few similarities.

Secondly, bilingual education that incorporates instruction in the students’ native languages helps students keep pace with their peers who are more proficient in the second language.

In fact, a longitudinal study of bilingual (Spanish–English) programs in the U.S. showed that students in programs which emphasized a gradual transition to English fared better academically in the long term than students in either English-only immersion programs or “quick-exit” programs where Spanish is used for a short period of time and abruptly phased out after.

With relación tutora, indigenous students are able to receive instruction in both Spanish and their native languages. This way, they’re in a better position to both improve their Spanish and avoid falling behind their peers who have higher levels of Spanish proficiency. But there are cultural and social benefits to this approach as well.

Bilingual education helps children to maintain pride in their cultural heritages and linguistic backgrounds. This is especially important when one considers the history of oppression and cultural shame that indigenous groups have suffered in Mexico and the Americas in general.

Bilingual education can also help to foster a sense of community and inclusion among students of different cultural backgrounds. According to teacher Sixto Mares Navarrete, since implementing relación tutora, “student relations have improved… there is now less discrimination due to a student’s indigenous identity.

Before, there was a problem where a student didn’t want to work with another student because he is Huichol or because he is Tepehuan.” Another teacher noted a similar pattern in his classes, where relación tutora is facilitating a greater exchange between students of different cultures and languages, resulting in less inter-ethnic tension.

Ultimately, the most powerful aspect of relación tutora, regardless of the language of instruction, is the fact that it helps to develop independent learners. As opposed to the traditional model of education, where a teacher is the sole party responsible for instruction, relación tutora is based on the idea that all students have the potential to become self-directed tutors and learners by drawing on their prior knowledge and using it to guide further research and exploration.

Within the educational context of Los Charcos and Huazamota, this methodology empowers indigenous students to draw on their knowledge of their native languages to better not only their understanding of Spanish but other subjects as well.

Thinking back on my time in Durango, I’m reminded of that famous Einstein quote, “Everybody is a genius. But if you judge a fish by its ability to climb a tree, it will live its whole life believing that it is stupid.” Los Charcos and Huazamota are proof that taking into account a students’ individual talents and skill sets, including those involving language, is the best way to broaden their potential for success.

Chi Anunwa is a Princeton in Latin America Fellow with Redes de Tutoría, a Mexican education reform NGO that seeks to improve educational attainment in the country’s poorest rural schools. Before moving to Mexico, she worked as an English teacher in Quito, Ecuador. Her interests include education, criminal justice, Latin American politics, and social movements. She is a graduate of Princeton University. She can be contacted at chi.anunwa@gmail.com.