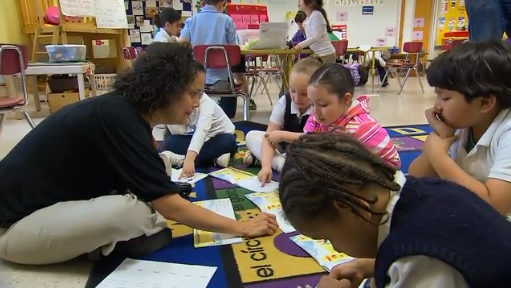 In New Britain, Connecticut, a new school superintendent has pushed for a dramatic and controversial shift in how to instruct English Language Learners.

Superintendent Kelt Cooper is doing away with bilingual education and phasing in mostly English classes that have an intensive focus on grammar, a recent story on PBS News Hour reported. He compares the approach to teaching English as a foreign language.

Cooper was unhappy with how ELLs in the district were performing on standardized tests.

Prior to the shift, DiLoreto Magnet Elementary School used dual-language instruction. But the school was faltering. As PBS notes, about 85 percent of ELLs were failing the state’s reading exam.

“When it comes to English-language learners, I make it very clear — our job and our objective is to get them to acquire English as rapidly as possible, so they can be in the mainstream,” Cooper told PBS.

Critics of the program are concerned about the message it sends to weaken the bilingual program. School board member Aram Ayalon, an education professor, believes that the dual-language program could have worked if it had been better carried out correctly.

“A basic truth in teaching is you start with what your students know, which may be Spanish, German, Polish, and you build on that,” he told PBS.

Cooper, the superintendent, previously led the school district in Del Rio, Texas, along the U.S.-Mexico border. He stirred up controversy in that district. According to media reports, he cracked down on students who lived in Mexico but attended Del Rio schools by posting staff members at the Mexican border to pull aside students crossing over.

“Anti-immigration groups heralded Cooper as a hero while civil rights advocates questioned whether his approach was constitutional — or effective, since so many of the targeted youngsters proved they were legally allowed to attend Del Rio Schools,” the Hartford Courant reported.