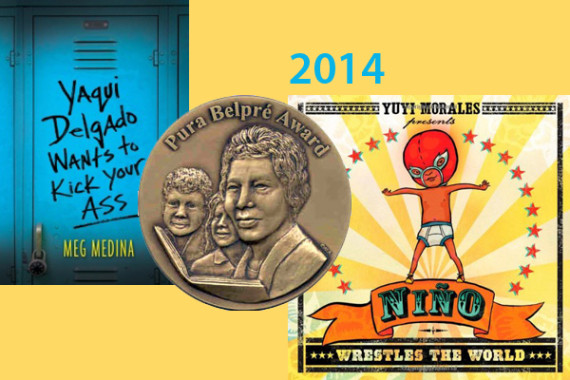 Wendy Lamb: Can you please tell me something of your background, and your work in children’s books?

Ruth Tobar:I worked as Publisher and Executive Director at Children’s Book Press and have been involved with REFORMA, the National Association to Promote Library & Information Services to Latinos and the Spanish Speaking for over a decade.

In that time I have helped to plan and identify resources for the 10th and 15th Pura Belpré Anniversary Celebraciones and served on the 2010 Pura Belpré Award Selection Committee. I have participated on other committees and have worked with the leadership of REFORMA to strengthen the association at many levels. I have volunteered at REFORMA’s RNC IV Conference in Denver and have assisted in any way I can.

As a person of color and a publisher of multicultural children’s books, I saw the value of having children of color reflected in published works and involving the community that is reflected in the books as well.

WL: Why did you take on the role of chair of this award?

As chair, my goals are to build a team that will work collaboratively to select the highest quality books that reflect the Latino experience in the United States and Puerto Rico. I am humbled by the opportunity.

The committee is comprised of a group of excellent and dedicated librarians and their names are Mary Clark, Alicia K. Long, Paula Gonzales, Maria X. Peterson, Celia C. Perez and Armando Ramirez and Oralia Garza de Cortés, who served as the Cultural Competence Consultant and is one of the founders of the award.

WL: This year’s winning books are a varied, rich group. In fiction: the Award book, Yaqui Delgado Wants To Kick Your Ass by Meg Medina, has one of the most memorable titles ever. Matt de la Peña’s Honor book, The Living, is an intense high adventure thriller. Another Honor is a remarkable biography in poems by Margarita Engle: The Lightening Dreamer: Cuba’s Greatest Abolitionist; the third Honor is a kind of folk tale, Pancho Rabbit And The Coyote: A Migrant’s Tale, written and illustrated by Duncan Tonatiuh. This also won an Honor in illustration.

The other winners in the Illustrator category are equally impressive. Each one is original, and so appealing: The Award book is Nino Wrestles The World, by Yuyi Morales, and the Honor Books are María Had A Little Llama/ María Tenía Una Pequeña Llamita written and illustrated by Angela Dominguez, and Tito Puente Mambo King/ Rey Del Mambo written by Monica Brown and illustrated by Rafael López.

Are you finding that your pool of high-quality books is growing?

RT: There is excellence in what there is being published. The top is very high quality. In terms of the quantity of books and the ability of a teacher, librarian or parent to select among many excellent books — now that is where the problem is currently.

Since 2010, when I served on the committee, the numbers have gone down although talent has not diminished, but the number of submissions has gone down, and we are in crisis mode.

You look at the Newbery and Printz and Caldecott books — usually it’s white winners. With the exception of a Newbery Honor for Margarita Engle, for The Surrender Tree, or David Diaz’s Caldecott for Smoky Night, Latinos are excluded.

WL: How can publishers do a better job of finding and publishing writers from a Spanish-speaking background?

RT: There’s been an ongoing conversation about Latinos in print for the past year; The New York Times published an article in December 2012 entitled “For Young Latino Readers, an Image Is Missing” about the lack of Latino children’s literature and recently another article entitled “Where Are the People of Color in Children’s Books?,” and Latino librarians held a panel discussion at ALA Annual in Chicago, facilitated by Lucia González.

It was very well attended — the panel included Oralia Garza de Cortés, Teresa Mlawer, Liza González Sánchez, and Jason Low. They talked about the increasing number of Latinos in the US population, and the decreasing number of books by Latinos.

Publishers such as Arte Público, Cinco Puntos, and Lee & Low are consistent in their publishing of Latino works, but the bigger houses must have more of a presence. As we grow in population, the Latino community’s presence in publishing stays the same or even decreases.

The publishing houses could also reach the Latino community by hiring Latinos in decision-making positions at all levels of their organizations. The talent pool within our community filled with talented, professional, and very creative people and would happily work to publish, market, and sell high quality Latino literature for children.

Publishers should look at two blogs: the Lee and Low’s The Open Book, and Celia C. Perez’s, All Brown All Around, a blog about Latinos in children’s and YA Books.

Celia is a member of the 2014 Pura Belpré jury. Both blogs are excellent and very informative. The websites of Latino authors and artists, of the small multicultural and Latino publishing houses, Día de los niños / Día de los libros, the Pura Belpré Award, the Tomás Rivera Book Award and the Américas Book Award are also great resources to identify Latino authors and artists.

Publishers should also talk to everyone who has ever been a part of the Pura Belpré committee—they have a really intimate knowledge of this area. Every children’s librarian, anybody who buys or selects books or helps a kid out at the library, the local people who give their time, are the people who have the answers. Publishers should attend Latino poetry slams, the arts festivals, and the cultural events as well. The Latino community is incredibly talented and the arts are alive in our communities throughout the United States and Puerto Rico.

WL: Ruth, thank you so much for speaking with me—what an interesting and helpful conversation. Thank you, too, for your work with REFORMA, with the Pura Belpré Committee, as an educator, and as a former publisher. I look forward to hearing memorable speeches at this year’s Pura Belpré ceremony. I say ceremony—but it’s more than that—it’s always a celebration!

RT: The 2014 Pura Belpré awards ceremony will be at the American Library Association conference in Las Vegas on Sunday, June 29 from 1:30 until 3:30 pm (please check the conference program for the most up-to-date information). In 2016, REFORMA and ALSC will celebrate the 20th anniversary of the awards at ALA in Orlando, which will honor Dr. Henrietta Smith.

Ruth Tobar holds a Bachelor of Arts degree in literature from Michigan State University and a Master of Education degree from Harvard University Graduate School of Education. She has many years of experience in the fields of education, non-profit management, publishing, and multicultural literature for children. Ruth is currently the director of Plaza Comunitaria in Grand Rapids, Michigan, a school for adults who did not have the opportunity to finish their schooling in their country of origin and served as Executive Director and Publisher for Children’s Book Press, a non-profit publishing house in San Francisco that published the award-winning children’s book The Storyteller’s Candle/La velita de los cuentos by Lucía M. González and Lulu Delacre.