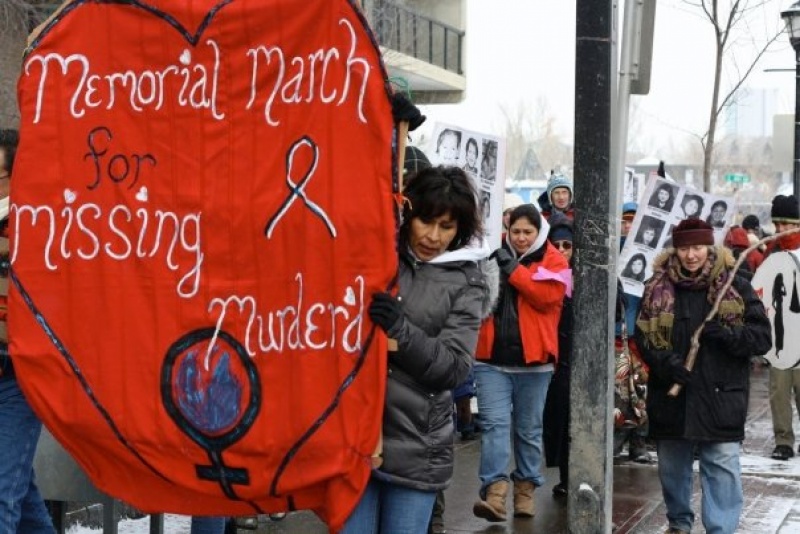 On February 14, 2014, the 23rd annual Women’s Memorial March (WMM) was held in Vancouver, Canada. While some celebrated Valentine’s Day with their sweethearts eating chocolate and swapping Hallmarks, thousands of Indigenous people and supporters joined the March to honor their murdered and missing loved ones.

First held in 1991 in Vancouver’s Downtown Eastside as a response to an Indigenous woman’s brutal murder and the inaction of authorities, this year the Women’s Memorial March took place in another 17 cities throughout the US and Canada. The marches are held to remember the high number of missing and murdered Indigenous women and girls and to bring attention to the government’s lack of action to solve these cases.

As the WMM mission states, “This event is organized and led by women in the DTES (Downtown Eastside) because women-especially Indigenous women — face physical, mental, emotional, and spiritual violence on a daily basis. The February 14th Women’s Memorial March is an opportunity to come together to grieve the loss of our beloved sisters, remember the women who are still missing, and to dedicate ourselves to justice.”

Thumping traditional drums and holding up flags, signs, and pictures of lost mothers, daughters, sisters, aunts, and friends, participants took to the streets to protest against violence, racism, and misogyny and to make women’s resistance visible. Throughout the day participants stopped at sites where women were murdered or last seen and offered prayers, medicine, and flowers in commemoration.

Maya Rolbin-Ghanie, the founder of Missing Justice, a solidarity group which organizes popular education events about violence against First Nations women in Quebec, explains why she marches in the blog series “Why I March”. She says, “I’m afraid, in spite of myself. I want to walk down the street alone at night with no other distraction than the curve of the moon and the wind at my back and the shifting of the leaves. It’s unacceptable, all the blood and pain of daughters still pooling and seeping into the ground all around us. Those who possess the most power are always the most hunted. This has to change.”

Beyond remembrance and mourning, the march is a demand for justice.

Participants are demanding for the government to arrange a national public inquiry into why the murder and disappearance rates for Indigenous women are so high and so often ignored. In a report by independent researcher Maryanne Pearce, it was found that the cases of over 824 missing and murdered indigenous women and girls have been unsolved or investigated.

These women’s deaths and disappearances are not represented prominently in the news and are most often brushed aside by law enforcement and media alike. In the past, the United Nations Committee on the Elimination of Discrimination Against Women issued this statement: “Hundreds of cases involving aboriginal women who have gone missing or been murdered in the past two decades have neither been fully investigated nor attracted priority attention.”

Many organizations such as the UN, Native Women’s Association of Canada, The Assembly of First Nations, and Humans Rights Watch have requested Canada launch an inquiry and take action to address violence against Indigenous women. So far these requests have not been heeded.

Chief Elk states the injustices these marches bring attention to are all symptoms of settler colonization. “The rate of violence, the lack of response, the structure that helps it continue: This is settler colonialism, the occupation of the land by imperial powers and people that stand on top of Indigenous nations. Both Canada and the United States are settler states.”

To document cases and make the information accessible online, the “Save Wiyabi Mapping Project” illustrates unsolved missing and solved and unsolved murders of Indigenous women in the US and Canada. You can also read reports and sign up to receive alerts in your area. Check it out here https://missingsisters.crowdmap.com/

The WMM expresses compassion and solidarity. It celebrates the supremacy of love, family, and community while inspiring courage and resistance. Most significantly the march reminds us that these women live on in the hearts and actions of their families and these protesters.