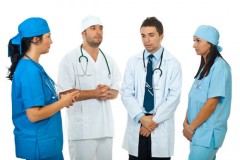 A recent survey by the Robert Wood Johnson Foundation indicates that physicians are frustrated by social issues that affect their patients’ health. According to the survey, doctors say that if they could, they would prescribe solutions to their patient’s ongoing social challenges, like nutritional food, exercise, housing assistance and help with utility bills. This is because according to 85 percent of primary care physicians and pediatricians, these kinds of unmet social needs are directly leading to worse health for all Americans. The survey found that (as reported in AmedNews.com, the American Medical Association’s news service):

82% of physicians said patients frequently express health concerns caused by unmet social needs that are beyond their control as physicians. And 74% of doctors report that these unmet needs often prevent them from providing quality medical care. These unmet needs were reported as affecting patients of all income levels.

According to the report, an estimated 60% of premature deaths in the United States are attributed to social circumstances, environmental exposure and behavior. Asthma among children was cited as a prime example of a condition physicians are challenged with to keep under control. Because there are so many environmental factors outside of the physician’s expertise, the physicians are frustrated that these factors impede their patient’s progress and improvement.

Since doctors are not trained to provide the kinds of answers to many social needs, many physicians and physician groups have become outspoken advocates for the kinds of social changes needed to help their patients. They’ve used their influence and collective voices to appeal to politicians and to educate the public.

With the recent issuance of the Mercury Rules and Toxics Standards by the EPA, doctors can be proud of the part they played in support of the rules. The medical profession has long been outspoken about the need to protect children and mothers from the harmful effects of Mercury and other air pollutants. As Lexington physician, Dr. Vicki Holmberg points out on the American Business for Clean Air site:

Medical societies representing 300,000 of our nation’s finest professionals — including the American Nurses Association, the American Academy of Pediatrics and the American Public Health Association — concluded years ago that the EPA was doing too little to protect citizens, especially children, from the toxic effects of mercury and other components of air pollution.

This past summer, Physicians for Social Responsibility joined with 200 other organizations in delivering 630,000 comments to the US Environmental Protection Agency’s regional office in Boston in connection with the Mercury and Toxics ruling.

Doctors Can’t Do It Alone

Voices of physicians in the clean air fight is important. On a daily basis, doctors encounter the health impacts of pollution. Their collective stance has long been that cleaning the air is a healthcare imperative, lending strong support to our efforts. Dr. Weiner, an associate professor of medicine and pediatrics at the University of Illinois at Chicago, says even though most social issues are outside of medical training, doctors should be encouraged to address the social issues. He says, “The mistake is to think that social issues are never things physicians can help patients with…Sometimes physicians can’t do anything about [a person’s unmet social needs], but sometimes they can.”

Thank goodness for all of us that so many outspoken doctors have taken action! But, these doctors know that they can’t help people breathe without clean air.