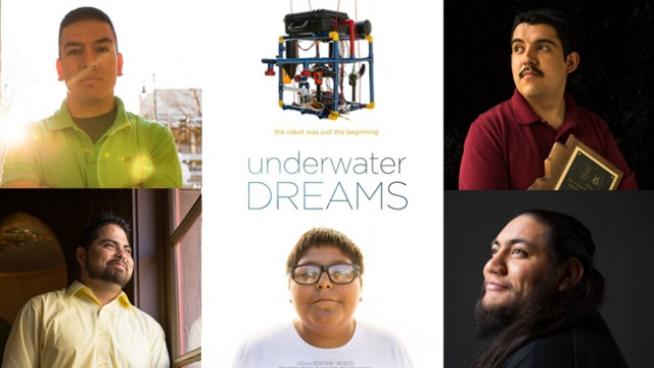 Competing on a robotics team formed at Carl Hayden High School in Phoenix, the four young men defeated students from the elite Massachusetts Institute of Technology in an elite robotics competition.

In the film, the students recount how uncomfortable they felt and how much they felt they stuck out as Latinos when they walked into the competition. An article in Wired ten years ago brought attention to their story.

The film is called “Underwater Dreams,” a nod to the robot they built to perform underwater tasks. I admit that I have not yet watched this film, but I am eager to do so.

The teachers featured in the film share quite a few qualities with Jaime Escalante, a California teacher who famously guided Latino students toward high performance on the Advanced Placement calculus exam. Carl Hayden High School has struggled with high dropout rates among Latino students.

The discomforting part of the story is what has become of the undocumented students 10 years later. While the MIT students have gone on to great career success, many of the immigrant students have struggled.

This may not be the “happy ending” we are looking for — but it reminds us that telling real stories means there is not always an easy ending.

“At the end of the day, we’ve got to step back and realize these are kids that are trying to seek a better life,” said Jeb Bush Jr., the son of former Florida Governor Jeb Bush and executive producer of the film. “And so as a great country, we should really focus on being great and being humane and taking care of these kids.”

According to Bush, three of the young men are still undocumented. One became a U.S. citizen and is serving in the military.

Meanwhile, the teachers who impacted the young men are still making a difference with other young Latino students. Al Jazeera recently shared the story of Faridodin “Fredi” Lajvardi, an Iranian immigrant who teaches marine science and robotics at the school. Recently, he was coaching a new group of students on their underwater robot project.

“I feel that each student needs to be aware of why they need an education — the necessity and the power of it,” Lajvardi told Al Jazeera. “I spend probably more time than most instructors on communicating the purpose behind education, and I make it as blunt as possible to drive the point and show how it directly affects their future forever … I try to connect their school experience to their sense of personal identity.”