There’s no doubt 2011 has been an eventful year in Mexico, but sadly, that’s been largely due to escalating drug-related violence in certain parts of the country. The December 2010 split between La Familia Michoacana and the Knights Templar, as well as the internal split in the Gulf cartel between the Metros and Rojos factions, have added to the chaos and conflict. Ciudad Juárez continued to be the epicenter of violence, the Casino Royale attack in Monterrey shocked the region, and Veracruz garnered the narco spotlight with the dumping of dozens of Zetas corpses. 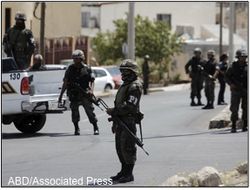 So what can drug war observers expect to see in the coming year? The security situation in Mexico is extremely fluid, and the landscape of territorial conflicts and epicenters of violence could look very different in as little as six months. The Mexican government has either arrested or killed several high-ranking cartel leaders in the last 18 months, and hopefully this trend will continue as cooperation and information sharing between Mexican and US authorities increases.

However, this “kingpin strategy” has not really resulted in any significant decreases in violence. Since most cartels operate like corporations, they have plans for leadership succession when someone at the top of the organizational chart is taken out. Other options are for the cartels to split into rival factions, which is what is occurred with LFM ans the CDG.

Cartel control of territory is anything but static, and Los Zetas is currently the most aggressive group when it comes to expansion. They’ve engaged in violent activity in areas traditionally considered strongholds of the Sinaloa Federation. This means 2012 could see a polarization of the drug war, where the smaller and weaker cartels pick sides and align with either the Federation or Los Zetas. While such an arrangement would significantly reduce violence levels in areas where the smaller cartels are competing with each other or one of the “big two,” there could potentially be huge outbreaks on the future front lines of Federation-Zetas conflicts.

One of the most important events of 2012 will be Mexico’s presidential election in July, and subsequent inauguration in December. While a major strategy change in the drug war isn’t feasible for several reasons, many Mexican citizens are tired of the carnage and desperate for some kind of change from their new president.

Everything from legalization to a pact with the cartels has been thrown around as ways to stem the violence, and it will be interesting to see what strategies the various candidates put forth leading into the election. It’s important to note that who sits in Los Pinos doesn’t matter nearly as much to the TCOs as who sits in the chairs of the local mayors, police chiefs, and governors. Changes in these appointments — whether initiated by Mexican lawmakers or TCO threats — are more significant to the drug war landscape, and merit closer observation in 2012 than the presidential election. You can read more about my thoughts on the election HERE.

I’m hoping to see more outreach by grassroots movements like Javier Sicilia’s in an attempt to go more mainstream during an election year. Many supporters think international media attention or the number of people present at marches are not that relevant, but for the US to take notice – and for Americans to care enough to change their drug use habits – requires massive mobilization and the media attention that comes with it.

Actually, I hope the media pays more attention to Mexico and the drug war in general in 2012. The American public is thankfully a bit more clued in to what’s happening south of the border, but I’m still coming across stunned audiences on a regular basis who are shocked by news that those of us who regularly follow this stuff consider “duh” material.

I wouldn’t be surprised to see a slight increase in US military involvement in the drug war if conditions on the ground continue to worsen. By that, I mean more drone overflights in Mexico, more “boomerang” operations originating in southwest border states, and an increase in police training and exercises. If the new president decides to demilitarize the drug war by pulling the army out of many of their deployments (a platform I think Andrés Manuel López Obrador will be running on), then expect US cooperation to focus almost exclusively on helping primarily municipal and state police – the source of most of Mexico’s law enforcement corruption.

I wish I could honestly say I envision things getting better in Mexico in 2012, but I really don’t. This is a “lame duck” year for Calderón, so don’t expect any changes at all in the current drug war strategy. Mexico’s economy is faring a bit better, and I’m hoping the government can focus more on domestic programs that offer more educational and employment opportunities for adolescents and teenagers. The presidential candidates would be VERY wise to make that one of their major platforms, in my opinion.

The most we can do from the US end of things is to hope and pray that things do get better, but to be prepared for things to continue to get worse.

Previous Post Some politicians have a nasty habit of ignoring Latino voters
Next PostIn Lawrence, MA, controversy keeps us alive

Some politicians have a nasty habit of ignoring Latino voters
1 Comment
In Lawrence, MA, controversy keeps us alive