Latina Lista: News from the Latinx perspective > Columns & Features > BlogBeat > Hips, Heart, and Soul: Shakira Shakes It for the Kids

Hips, Heart, and Soul: Shakira Shakes It for the Kids

When the scandal around President Obama’s Secret Service took over the headlines last month, it all but obscured the reason he went to Colombia: the 2012 Summit of the Americas. 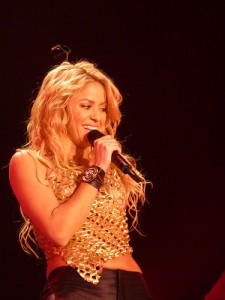 Pan-American relations were rocky even before the scandal broke, unfortunately. US policies on Latin America have hardly changed since the previous administration. Colombia is a safer place than it was a few years ago, but rural women and children are still squeezed between the government and its armed opponents. And according to UN statistics, Colombia is still a tough place to be a child.

It’s no small thing, then, that during the Summit, Colombian President Juan Manuel Santos pledged to build 13 multi-purpose centers to serve needy children. Pop singer Shakira stood with Santos and Obama to announce the new $36-million public-private initiative, called Primero Lo Primero, or First Things First. And she was not there for decoration. It turns out the artist best known for singing and swiveling with Wyclif Jean in “Hips Don’t Lie” was a committed children’s advocate even before she became a global superstar.

According to the fan sites, she saw belly dancing for the first time in a restaurant with her Lebanese father when she was four (the same year she began writing her original lyrics), went home, and tried it herself. The primary school classmates who watched her improvised performances dubbed her “the belly dance girl.” At the age of eight, when she first saw homeless children living in a park, she made up her mind to become a famous artist and help children. Her success has been impressive on both counts.

Shakira’s debut album was released when she was 13, and by the time she was 18 she had starred in a Colombian TV series and released a third album that topped charts in eight countries. “Waka Waka (This Time for Africa … “We’re all Africa”) the song she wrote and performed for the 2010 FIFA World Cup, is the most viewed high-definition video on YouTube, and several of her videos have had over a billion views.

She has established two foundations, The Barefoot Foundation, named for the title song of her first hit album, “Pies Descalzos,” which provides educational, emotional, nutritional, psychological, and medical support to child victims of violence in Colombia, and ALAS, or Latin American Action in Solidarity. In addition to Wyclef Jean, her musical partners have included Carlos Santana, Annie Lennox, Mary J. Blige, Stevie Wonder, the Dixie Chicks, the late Mercedes Sosa, and Dora the Explorer.

In 2009 she was invited to speak at the Oxford Union, joining the ranks of Albert Einstein, several US Presidents, Mother Teresa, and the Dalai Lama XIV, and the Spanish-language People magazine named her Humanitarian of the Year.

President Obama has consulted with her about children’s rights, and recently appointed her to the US Advisory Commission on Educational Excellence for Hispanics. She’s a UNICEF Goodwill Ambassador. She has campaigned against Arizona’s anti-immigrant statute SB1070 (currently under review by the US Supreme Court) and taken part in numerous benefit concerts for children, peace, and the environment, including a concert for peace on the border of Peru, Brazil, and her native Colombia. In January 2012 she became the first Colombian to be named a Chevalier de L’Ordre des Arts et des Lettres by the French Ministry of Culture.

Some feminists surely deplore her sexy costumes, bleached hair, and slave-of-love poses, but she has maintained considerably more creative control over her work than most female artists in the pop music field. In 2010 she turned down a request from Gabriel Garcia Marquez to act in the film version of his Love in the Time of Cholera because it required nudity. (She did contribute two songs, one of which was nominated for an Academy Award.) And her lyrics are thoughtful as well as sexy.

“It has been scientifically proven,” Shakira said in one of her speeches, “that a kid who receives proper stimulation and nutrition during the early years will develop all their potential in life: intellectual skills, learning abilities, social and emotional abilities.”

In her Oxford speech she described an imagined future: “This is how I want the youth of 2060 to see us: That our mission for global peace consisted of sending 30,000 educators to Afghanistan, not 30,000 soldiers. That in 2010, world education became more important than world domination.”

Shakira tells the children of Colombia, as she told the children of Haiti in her cover of the Pretenders classic, “I’ll stand by you.” I’m standing by to see what she does for an encore!