Austin, Texas — Twitter, but increasingly Facebook and YouTube, are becoming essential elements to the way ordinary people in Mexico protect themselves from the war on drugs, according to experts sitting on a panel at South By Southwest Interactive called, “Life on the Line: Tweeting the Drug War.” 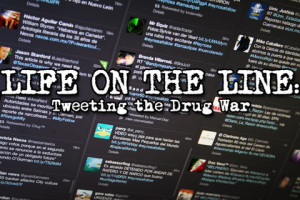 Correa-Cabrera spoke about a study she’s been doing specifically on the border state of Tamaulipas, which she said is characterized by being the “cradle” of the Zetas cartel, having more bridges to the U.S. than any other Mexican state, and especially the city of Reynosa has seen much more violence than other areas.

After Mexican President Felipe Calderón declared war on the drug cartels in 2006, and then in 2010 when the Zetas and Gulf Cartel stopped working together, the violence exploded, Correa-Cabrera said. Consequently, journalists stopped covering the issue all together to avoid being killed, and so social media emerged as the go-to medium for information.

“The formal media was not reporting these events. This is a war, even if the Mexican authorities don’t call it [that], we’ve seen many manifestations of war in the country, like the number of people who have been killed, the number of places we find them — and social media users are doing this work,” Correa-Cabrera said, noting that social media is the only way she could get info about territorial control of the drug cartels in Tamaulipas.

Del Bosque noted that social media use pertains to everyone in the state because, increasingly, anyone who is not involved with the drug cartels is also a victim. This includes human rights workers, teachers, civilians, to the tune of 100,000 estimated deaths since 2006, 27,000 disappeared and 230,000 people displaced (probably the figures are higher, she said).

Mainstream media in the U.S. has begun to depend on social media users to report on violence in Mexico, added Chapa, noting that he himself has built relationship with Twitter users who express concern over their own safety. Photos and videos of gun battles and violence no longer come from Mexican TV — but from Twitter and YouTube, he said. And Facebook is also a place where Mexicans congregate online to search for loved ones, or find out how to stay safe.

American-made social media is affecting the cartels, too, he noted, explaining that “traditional” narco-corridos have been replaced by narco hip hop ballads. Ultimately, the anonymity afforded by social media is the same feature that makes it as reliable as it is unreliable, everything has to be double checked, he said. But, “If you want to report on crime using social media, the narcos are very aware,” he said.