In California, Latino and Black Students Are Suspended Disproportionately

A new report by the UCLA Civil Rights Project on the high suspension rates of students in California is generating buzz among legislators and educators alike. The study estimated that more than 400,000 students were removed from class at least once in the 2009-10 school year–”enough to fill every seat in all the professional baseball and football stadiums in the state.” 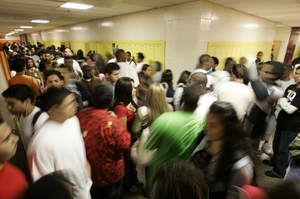 Co-author Daniel Losen said many of the removals are for vague infractions such as disrespect, defiance and dress code violations. ”The numbers in our report indicate an absolute crisis in many California districts since suspending students out of school–with no guarantee of adult supervision–greatly increases the risk for dropping out and involvement in the juvenile justice system,” Losen said.

The Sacramento Bee reports that the report that six bills aimed at lowering the suspension rates are being considered by the state’s lawmakers. The study found, for example, that at Roseville Joint Union High School District near Sacramento, 7.1 percent of Latino students had been suspended compared with 3.7 percent of white students.

But in some districts, white students were actually more likely than Latinos to be suspended, although rates among all students were high. The Los Angeles Times pointed out that in the Manteca Unified District south of Stockton 30 percent of Latinos, 33 percent of whites and 60 percent of black students had been suspended. In the Los Angeles Unified district, whites (6 percent) and Latinos (7 percent) were disciplined at somewhat similar rates.

Racial imbalances have been found in other states as well; have you examined the numbers in your state recently? That information should be available by district and even by school. Is your school district using “zero tolerance” policies or are they instituting efforts to address the racial imbalances?

How do teachers feel about the imbalances? I have often found that reports such as this make teachers feel as if they are being accused of being racist, making it tougher to deal with disciplinary issues. What can be done to intervene with the families of these students to change their children’s behavior? Many districts now use behavior interventions and are training teachers on such techniques.

Finally, the study cites a six-year Texas study of middle and high schools that found that suspensions have no academic benefits.

California reporters–or others interested–can find the report, along with more detailed data broken out by district, here.